5 mindful lessons we can all learn from the Brock Turner case—& Muhammad Ali. 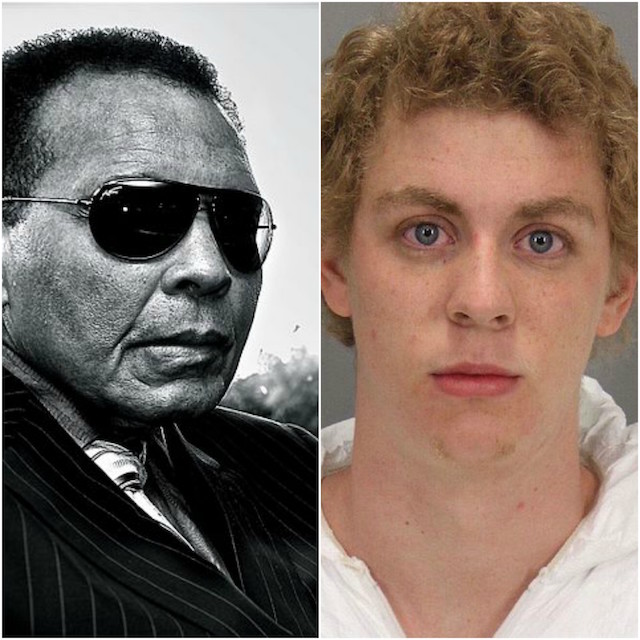 It’s been an intense week in the news.

A lot of media focus has been on Muhammad Ali’s death, as well as on the Brock Turner case.

Whereas the death of “the greatest” was met with intense grief, the details of the Turner trial have upset and angered many people.

While nothing can take away the loss from those close to Muhammad Ali’s, or undo what happened that night at Stanford University, here is a silver lining in both these situations.

That silver lining is—strangers helping others.

In media coverage about the Brock Turner case, Santa Clara County Deputy District Attorney Alaleh Kianerci highlighted the important role that two men had played in getting the case to trial. According to reports, Carl-Fredrik Arndt and Peter Jonsson, two Swedish Ph.D. students at Stanford who were biking at the time, had noticed something was off when they saw Brock Turner and the victim behind the dumpster. They interrupted Turner and held him until the police arrived.

Around the same time, articles re-emerged about the time when Muhammad Ali talked a suicidal man down from a building close to where he lived. The LA police reportedly credited Ali, who was alerted to the situation by his public relations manager Howard Bingham, with saving the life of the unidentified man during the 1981 incident. According to an article, Ali successfully got through to the man after the police, a psychologist, and a minister had failed to convince him to come down from the building.

Here’s what we can all learn from this:

Our actions in the world matter:  Without the two Swedish men, Brock Turner may have never been identified. Without Ali’s intervention and Bingham who called Ali in the first place, a man would probably be dead. While not every situation is as dramatic as these two incidents were, our actions impact others. Our actions can do good around us, even in bad situations.

That means it’s important for us to be willing to help in appropriate ways—whatever that means in a concrete situation. It can mean taking the car keys of a drunk friend away. It can entail calling 911 when we see a person alone on a deserted bridge in the middle of the night. It can include making sure that intoxicated people (both female and male) are safe from sexual assault.

The importance of showing up. Since our actions in the world matter, it is important for us to show up to what is in front of us. When Jonssen and Arndt biked past the dumpster, they could have ignored the situation. When Ali learned about the suicidal man from Bingham, he could have chosen to focus his attention on something else. Instead, all of them rushed to the occasion: Bingham reported that the police declined when he asked if Ali could help. Bingham decided to call Ali anyway—who showed up about four minutes later.

There may always be someone willing to help us. While Brock Turner’s victim was unconscious and incapable of defending herself, two people who were from another continent were willing to protect her by intervening. When a man was at such a low point in his life that he wanted to commit suicide, a boxing legend was willing to talk him out of it. Both of these are not the likeliest of scenarios. And yet they happened.

Help does not always look like we expect it to—and often, that’s a good thing. Because in both of these situations, there is something incredibly moving about having strangers care that much for someone else. The knowledge that someone cared enough to save them may both have provided the woman in the Brock Turner case and the suicidal man with some solace in dark times.

For everyone else, this is a reminder to be open to unexpected help. When we ourselves are at a point in our life where we—for whichever reason—need someone to help us, that help may be available to us, even if it looks different than we expect it to.

It’s about helping others, not heroism: The two men who intervened at Stanford were not attempting to be heroes. They were just concerned about a fellow human being, as is shown by the report stating that Jonsson repeatedly cried when recalling the incidents of that night.

Similarly, while Ali had never shied away from announcing his greatness, helping the suicidal man was clearly coming from a place of concern for another person. Ali helped the other man because of his heart, not his ego.

Everyone has the potential to be a hero(ine)
I understand the intention and sentiment behind calling both the two Swedish men and Ali “heroes”. Like many others, I am immensely grateful for what they did for another human being in need of help.

At the same time, I hope that that word “hero” does not create an artificial distinction between them and the rest of us humans, or makes certain forms of help seem more important than others. Case in point: while Ali was the one to talk the suicidal man down from the building, it was his public relations manager Bingham who had the idea of asking Ali for help in the first place. If Ali is a hero for saving a man’s life, so is Bingham.

We don’t need movie-style heroes to save us. We need caring human beings to help us in situations where we can’t help ourselves. And we need to do the same for others whenever we can.

If there are collective lessons to be learnt from this week’s event, let it be these ones.~

If you have an example of how someone has unexpectedly shown up in your life to help, please share it in the comments below or on my Facebook page.
~

Guardian Angels Where you Least Expect Them & A Lesson in Paying it Forward.