Honoring the Ingredients of my Father’s Love. 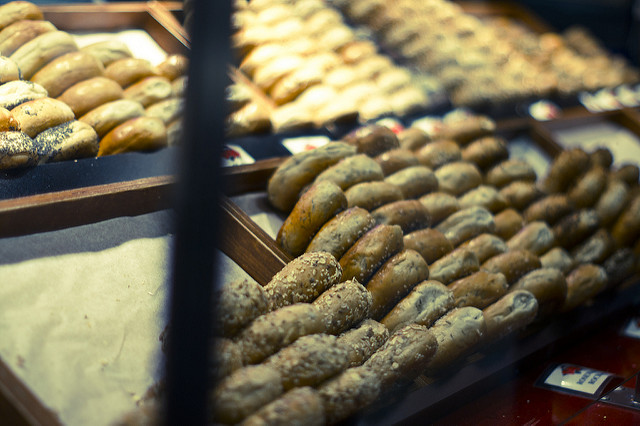 My Dad died this week, just shy of his 95th birthday and his 64th Father’s Day.

The tears come and go, but most recently they made a tender appearance as I stood in line at the neighborhood bagel store. Bagels have seasoned my nutritional and emotional world since I can remember.

The food our parents fix leaves a taste that is never forgotten. My father’s bagel, butter, bacon sandwiches dripped a salty-sweetness on Sunday mornings. The richness matched his warm love, that started from his sloppy-blue leather slippers and spread to the top of his peppery-gray hair. He enjoyed making me these breakfast sandwiches as much as I enjoyed eating them.

We could only eat one kind of bagel though—the New York City kind. He’d pick up half a dozen every few days. Never more; you can’t eat a bagel that’s not fresh. We weren’t big on cream cheese, unless it was cream cheese and olive sandwiches on Jewish rye. But our bagels only needed butter, spread when the bagel was still hot so my father’s fingers jumped a little as he called, “Bagel is done!”

When I was 16 years old, my parents got divorced and my dad moved out. I stopped eating bagel, butter, and bacon sandwiches, among other things. Bagels remained, however. My father continued to bring them home, but now to a different house and eventually, a different wife.

The bagels were always waiting for me when I visited and he’d toast them just right. I only ate one half and always plain. I’d seen a friend dip her bagel in tea and I tried it one time, thinking of Oreos in milk, donuts dipped in coffee. But I only needed to do it once to know that a soggy, wet bagel was far from my heritage.

My bagel was spread with an adolescent resentment that lessened when I went off to college.

Once a week, the large padded manila envelope arrived, stuffed with bagels—poppy and sesame seeds sprinkling their way into our dorm room. I shared more than I ate, but the smell made me feel at home. At age 19, I bicycled 4,200 miles across the country. The ten mail stops along the way brought ten bagel packages. From Independence, Missouri, to Reedsport, Oregon, my father never missed a bagel delivery.

When I transferred from upstate New York to a Colorado college, not only did the bagels have to travel farther, but I was in a town that hadn’t heard of bagels. A breakfast round with a hole in the center was a “donut” in Boulder. Now the bagels arrived by Federal Express to keep their freshness.

When I fell in love and moved in with the man who is now my husband of over 30 years, he’d smile when the Federal Express truck arrived. “The bagel truck is here!” he’d call out with the same excitement we had as kids when the ice cream truck showed up. He loved to spread cream cheese on his bagel and add a slice of ham. When I got pregnant with the first of our three children, my butter came back—and lots of it.

Now came the question of religion and how we would raise our children. My husband being Catholic and myself a Jew, demanded a compromise. We agreed we’d raise the children to meditate, do yoga, eat bagels and celebrate Hanukkah and Christmas.

My son’s first solid food was tiny bagel pieces I’d break off of my morning bagel. As a toddler, I took him to the first bagel shop that opened. He was verbal enough to say, “Papa Mike bagel better.” I had to agree. With the birth of my second son came “Moe’s Broadway Bagel,” and finally they had found the magic.

It was a Friday evening in winter when I had to tell my father the truth: “Dad I think…I think we found a good bagel out here.”

We were both quiet and I knew I needed to say more.

“Dad, I really don’t think you need to keep sending them.” I hesitated and added, “Or maybe, just not as frequently.”

Like breaking the Sabbath bread, our bagel bond was broken that Friday evening. I knew I had to be the adult and reassure my father that it didn’t mean I didn’t love him. We both laughed at how silly it was that we were making such a big deal about bagels. But we also knew that years of feelings were spread thick atop those sesame and poppy seed bagels.

My children still connect with me through bagels. A “mommy” bagel is slightly toasted and spread with butter, never margarine. There were the adolescent years when frequently I’d hear, “Don’t we have anything different for breakfast than bagels,” followed by the slamming of the refrigerator. One evening when my teenage son came home later than expected from his girlfriend’s house, he sheepishly asked if I would fix him a bagel. It wasn’t until years later that he shared that was the night he lost his virginity. Way too young in my mind, but the bagel was likely a comforting return to his younger years. And still when they all arrive for the holidays, sharing morning bagels brings generations of warmth.

I can only hope they taste the love I felt as my father’s daughter.

My dad died peacefully in his sleep and while my stepmother shared, “I’d just given him a little taste of mango; he always loved those mangoes,” I thought a bagel would have been more fitting. Before the funeral, the rabbi asked us to share small memories. Of course I blurted out, “He toasted a heck of a lot of bagels!”

As my children often remind me, the most important ingredient in my chocolate chip cookies are the hands that mix the dough. For each one of us, remembering the ingredients of our parent’s love is what makes these special foods timelessly delicious. 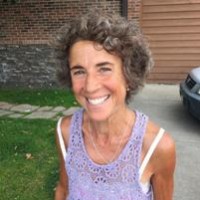