How to Rise Up After We Fall. 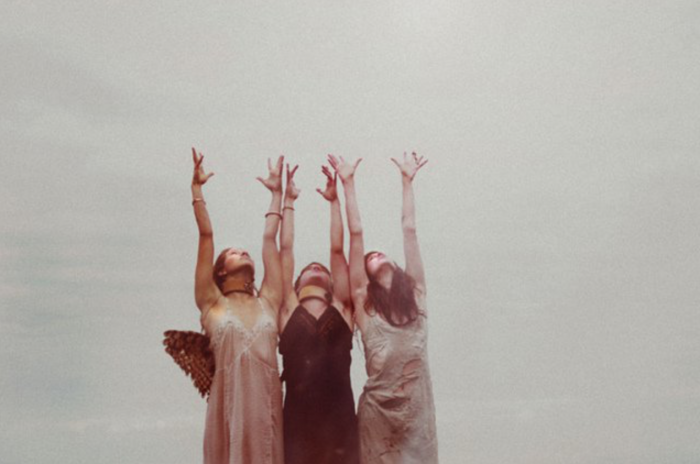 My father used to tell me that nothing in life is a coincidence. Nothing happens by chance.

As Catholics, we were taught that God always has a plan. If He closes one door, another one will open and every single thing that happens to us has meaning, a purpose and a lesson.

The events that happen to people are not always fair. I can’t tell you how often I’ve said the words, “I can’t believe that happened to that person. They didn’t deserve it.” But I’ve learned that people who go through the toughest of times are the ones who rise up the highest.

Because when you’re knocked down by life hard, the only direction to go is up.

A few years ago, one of the greatest fears I had for myself came to pass. My so-called perfect life came crashing down around me with very little warning. I was living the life I was raised to believe was the “ideal”—married, two beautiful kids, a house in the burbs. None of us think that it will ever happen to us, so when my marriage imploded, I fell into a cavern of darkness so deep most of my friends thought at one time or another I wouldn’t make it out.

It was that bad.

In my mind, for a long time, I was the biggest failure I knew. Somebody didn’t want to be with me anymore. I wallowed in my “I’m not enough” story. I believed my family thought I was a complete loser. I was certain that everyone I knew, including people I had gone to school with back East, must be thinking, “What’s wrong with her that she can’t have a successful relationship?”

I was a single mom now and everywhere I went, I hung my head in shame. I struggled as a single mom. I felt completely overwhelmed. The lack of a partner day in and day out created the false belief that I couldn’t do it by myself. That the three of us weren’t a “real family.”

None of this was true of course. They are stories we make up about ourselves to avoid going inward and looking at ourselves and the opportunity we’ve been given to have something better. When anything happens that we consider a trauma, whether it be the loss of our job, a business, a relationship, a loved one in our life, or something as unexpected as getting cancer, there is this amazing opportunity to become real and rise into something greater than where we are.

For me, that failed marriage meant a stripping away of everything I thought I should be and should have in life so I could emerge as who I always was. I stopped pretending to be anything else and started to own all of my mistakes, insecurities and failures. I had to admit that I carried stories about what other people thought of me that simply weren’t true.

When we fall hard, most of us feel that we can’t get back up. Fear, uncertainty, depression, and the stories that “we can’t” are what keep us immobilized. We think, “How am I going to get through this? I’m never going to be happy again.”

You will. I promise you.

When we fail at something, when we lose everything, we are set free. We are redirected to a new path. One we never saw for ourselves. One we never would have ventured to go down had it not been for the failure.

Here’s what we have to do to rise up again:

Trust that whatever is happening is a gift. It’s hard to believe it in the moment. But you’ll see it eventually.

Go inward and really look at how you co-created the experience. Failure becomes your greatest opportunity to do some deep inner work. What do you really want? Where were you settling before? What lies were you telling yourself to stay where you were at? What dreams can you make happen now that you’ve been set free from that thing you had before that you thought was the key to all your happiness?

Ask for help. I’ve witnessed first hand some of the biggest tragedies and most serious illnesses befall people who are so selfless and giving toward others that it’s the only thing that teaches them how to receive. They have no other choice. They have to reach out and ask to be taken care of. There simply was no other way for them to learn how.

Don’t stay stuck being the victim. We’re not victims unless we choose to be. The victim story has never served me. It allowed me to feel sorry for myself for a while. It allowed me to not take responsibility for my part in my own struggles. But it didn’t move me forward. Owning my role in things did. It empowered me. And there is no way to rise up out of the ashes until you empower yourself again.

Make sh*t happen. Don’t allow the sh*t to happen to you. That’s empowerment.

Here’s what I learned from my failure: I’m strong as hell. I’m beyond resilient. I’m ballsy and courageous. I’m imperfect and fearful and insecure at times and I’m not hiding that part of me from anyone anymore. Being the girl that had it together all the time and needed to be perfect was f*cking exhausting.

I have grace and dignity and can admit defeat. I have the most amazing family a girl could ask for. I’ve seen the rewards of my loyalty and devotion to my friends because I received it back tenfold in my darkest hours from them.

I learned to stop resisting what is. I’ve learned to surrender to what’s happening in the moment and not try to control things so much. I learned to be real and vulnerable with people, including men because I’ll be damned if I won’t love and be loved again.

I learned I’m worth it. That was the biggest gift of all I got. Love will find me again because I’m truly worth it.

Whatever you are going through, you can emerge defeated or you can pick yourself back up and fight. The trauma, the suffering, the pain—it’s come to make you greater. So don’t keep yourself down. Fight hard.

There’s something truly amazing on the other side.