The Sexualization of Breasts & the Taboo of Breast Feeding. 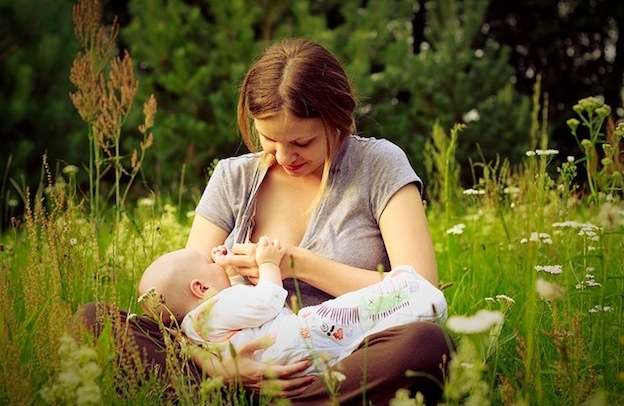 In the Oakland airport, my husband and I ran across a thing—a kind of oval, portable “closet” on wheels standing in one of the hallways. It had some kind of acronym on it.

MOMAVA or some such—the first three letters were definitely “M.O.M.”

“What is that?” I asked my husband. “It looks just like those public toilets on the streets in San Francisco. The kind where you put a quarter in, a door opens, you go in and pee, and when you flush, the whole thing flushes, walls, floors, everything.”

We walked over to take a peek.

I couldn’t believe my eyes. It was what was referred to as a “lactation station” provided for nursing moms so that they could nurse “in privacy.”

“Lactation Station?” Were they kidding?

My husband casually wondered out loud just how many nursing moms in the airport knew that the “lactation station” was there for them to use to nurse their babies in privacy in the first place.

I wondered why they needed “privacy” in the second place.

On the surface, these MOMAVA things look like a really neat accommodation for nursing moms. But to tell you the truth, I don’t think that’s what they are at all. I think they are really about the shame associated with the sight of a mother providing life–nourishing milk to her child from her breast.

To tell you the truth, I think they are yet another way in which this patriarchal society discounts the essential necessity of a mother’s milky breasts while making sure that those same breasts remain for men a self-satisfying sexual toy.

I know that the Oakland Airport is very proud of their MOMAVA—their spokesperson says so right on their website:

“Oakland International has become the first airport in the state to buy and install free-standing pods specifically designed for breastfeeding mothers. The lactation stations give mothers a place to pump breast milk or feed their babies. It’s very cozy, it’s lighted, it’s clean, and spacious.”

They don’t look cozy to me. To me they look like reprehensible containers into which you put people who are doing reprehensible things that shouldn’t be done in public.

About a week before my husband and I left for our trip, we were having a sandwich in a locally owned restaurant where we live. On my way out I saw that at the table next to me was a mother nursing her baby, a man who I presumed to be the father of the baby, and a third woman who looked enough like the mother to be her sister. There they were as I walked by, the back of the baby’s head hiding most of the woman’s breast, all just sitting and chatting amiably.

Nobody was staring at the mother—or at her breast. Imagine that? They were all just being together, eating and drinking, including the baby.

“What a beautiful thing to see,” I said as I walked by. “Just beautiful.”

The mother threw me a beaming, yet knowing, smile and I gave her an enthusiastic thumbs up, amazed that it actually takes courage for people to do something so simple and so natural as what that family was doing.

My guess is that scenes such as the one in the sandwich shop in my home town go on all around the world all the time and nobody gives it a second thought, Nursing mothers don’t have to give beaming and knowing smiles to other mothers who give enthusiastic thumbs up.

My guess is that openly nursing a baby is considered normal almost anywhere but in the good ‘ol USA—the land of breasts everywhere you look but never, ever, on the other end of a baby’s suckling mouth.

Show that MOMAVA to a nursing mother from a country where there are no such prudish thoughts about nursing mothers as there are here and I just bet she will look at it and wonder “What for? What’s to hide? Why do I have go in that closet when my baby needs to be fed instead of just merely sitting down where I am and feeding my baby?”

By the way—there wasn’t a single mom in the MOMAVA in the Oakland Airport nursing her baby, nor did I see a single mom nursing her baby in all of the four or five different airports I was in over the last few days. In fact, where are all these nursing moms that are going to be using that MOMAVA?

The bottom line is that our squeamishness around mothers breastfeeding in public is nothing more than a socially ingrained attitude, and an old-fashioned, post World War II one at that.

“As breasts became more sexualized, they became less functional: more the purview of men as sexual objects and less the domain of infants and as a source of food. As this transformation continued, breast-feeding, especially in public, became less normal and more taboo, and by midcentury most Americans attached a vague sense of disgust to the practice. Now that breasts were primarily sexual the idea of women breast-feeding infants, especially in public but even in private, felt abnormal and destabilizing. Modernity apparently did not include breast-feeding women; by implication breasts were for men and sex.”