Up, Up & Away: How Vertical Farming can Eliminate Food Deserts. 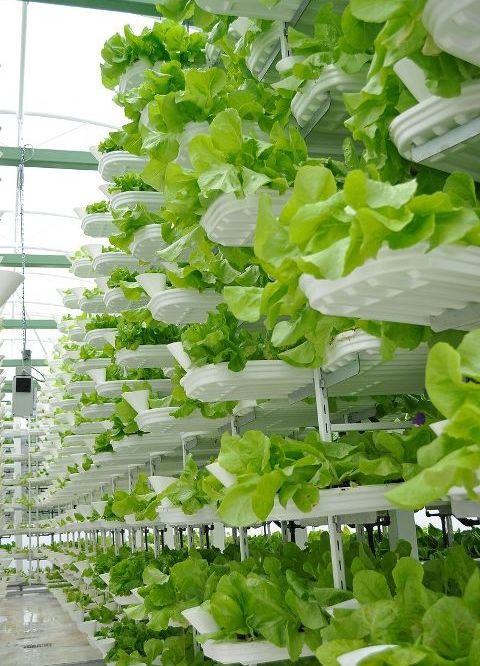 We may not know it as we go about our daily lives, but the truth is, the human population is growing faster than our limited resources and space can sustain us.

Even the most conservative of estimates predicts that there will be 9.6 billion of us on the planet by 2050. We are only a generation or so away from a major food and water crisis, yet we are doing little to stop it.

The obvious solution would be for humanity to immediately stop exploiting and depleting the balance of our ecosystem. We would quit abusing the soil we have and start growing food crops for people instead of feed crops for livestock. But so long as corporations have their hand in the bread basket, these changes are not likely.

Vertical farming, or farming on and in multi-story buildings to save space and soil, just might be one of the most viable solutions to the growing problem of food deserts.

In these areas, economic and political factors have caused limited access to grocery stores or other sources for healthy fruits, vegetables, and whole grain foods.

People who live in food deserts rely on convenience stores and fast food restaurants for meals. Because these foods are often high in fat, sodium, and preservatives and fall short on adequate nutrition, there is plenty to suggest that people in these areas are more likely to suffer from heart disease, diabetes, and other nutrition-related diseases and conditions.

The shortage of available healthy food choices has the potential to affect millions of people within our lifetimes if we don’t do something about it.

Columbia University professor Dick Despommier is among a growing number of advocates who believes that growing up might be the best way to deal with the issue of growing out of our resources. Vertical farms, he says, could solve the current problems we are beginning to face as 80 percent of our human population is centered in urban areas.

Vertical farming offers a new take on slow, and often organic farming. These growing spaces can utilize indoor, outdoor, or combined spaces in layered vertical levels, allowing us more bang for our spatial buck, so to speak.

Much like apartment buildings pack more people in per square foot or meter, and comparable to how skyscrapers allow more offices to be built per city block, vertical farms, too, make better use of limited space. In addition, insect control is simpler so pesticides can be eliminated, and vertical farms are relatively free from the effects of drought, flooding and disease.

It isn’t only a lack of grocery stores in urban areas that poses a threat. Climate change-related drought has caused considerable impact to food supplies worldwide. In the United States, for example, farmers lost $110 billion in grain crops due to prolonged drought in 2011. California, too, has suffered from what is perhaps its worst drought in recorded history in recent years.

These conditions have resulted in, and will continue to lead to significantly higher food prices, and may even affect food availability.

What’s promising is that vertical farms are now on the rise in several cities worldwide, and with soaring success.

Sky Greens in Singapore, for example, is the world’s first low-carbon, hydraulic powered vertical farm. Its creators have integrated eco-friendly technology like food waste recycling and alternative energy to produce vegetables using minimal land, water and energy resources. They are able to capitalize on natural sunlight by using a pulley system to rotate their growing racks. They also capture rainwater to minimize the environmental impact of their operation.

In Jackson, Wyoming where more people think of winter sports than crops, Vertical Harvest farm is able to produce 37,000 pounds of greens, 4,400 pounds of herbs and 44,000 pounds of tomatoes annually in its three-story hydroponic greenhouse. On just 1/10 of a city acre—less than the size of most residential lots—they are growing the same amount of food that would take up five acres of a traditional farm.

Even regions traditionally known for farming can benefit from vertical farms. At Farmed Here in Heartland city of Bedford Park, Illinois, the combination of vertical growing technology and local distribution methods are reducing energy use, travel time and costs. Its creators use aquaponic and aeroponic approaches in what was once an abandoned warehouse to grow food using less space, up to 95 percent less water and no harmful chemicals or pesticides. They also use alternative energy for lighting. This is important because energy costs are typically one of the biggest drawbacks, and most criticized aspects of vertical farming.

These are just a few of a growing number of vertical farms scattered across the globe. As these contemporary urban farms are proven to be not only viable but also profitable, more of them will be popping up in urban centers worldwide. They’re an innovative and delicious way to cultivate mindful sustainability as we rise to the demands of a growing human population.