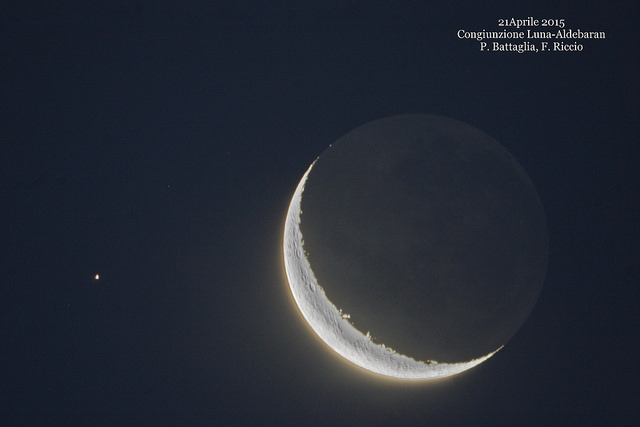 This is a must-see sky watching event: The star in the Bull’s Eye.

On July 29, we should get ready to look up at the skies and see a major astronomic event known as the Aldebaran. The occultation of Aldebaran occurs in the dawn twilight and involves a waning gibbous moon. Aldebaran will be visible over western Canada and the United States, low in the east-northeast sky before sunrise.

The Aldebaran is the brightest star in the constellation Taurus and is known as the “Eye of Taurus.” The name Aldebaran is Arabic, which means “The Follower” because it appears to follow the Hyades star cluster that forms the head of the bull.

“The K giant star is slightly larger than our sun, at 1.7 solar masses, and strong winds emanating from it are bleeding away its mass. Aldebaran is older and redder than the sun and preparing to fuse its lightweight core into heavier elements, which is common among stars of its type. Aldebaran has a surface temperature of about 6,760 °F (3,738 °C) and glows red, similar to Mars—which occasionally passes by the star in the night sky.”

Aldebaran is hard to miss, given that Taurus is highly visible on July 29. In fact, the bull is one of the oldest documented constellations, with its origins stretching back to the Bronze Age. At 65 light years away, the star is practically a neighbor to Earth. Its apparent magnitude is about 0.85, making it the 14th brightest star in the night sky.

The star is often covered (or occulted) by the moon, since it lies close to the path of the ecliptic (path of the sun, moon and planets in the sky.) Because of occultation, it is relatively easy to get a rough idea of the star’s size by estimating the time it is covered, as well as observing it in different locations. Calculations show it’s about 44 times bigger than the sun.”

Since the Aldebaran is the brightest star in the constellation Taurus, it is interesting to ponder the significance of this constellation. Perhaps it has a mindful message for mortals such as ourselves?

In the constellation Taurus, we may find our most materialistic impulses and desires. Indeed, if we have an enlightened mind, we can transform our desire nature into one that is more spiritual.

“In the early lives of Taurus expression, desire rules the thought life, coupled with the bold determination and strong will needed to acquire that which is desired. In advanced humanity incarnating in Taurus, desire is ultimately transmuted into aspiration, eventually leading to light and illumination. When the eye of the bull is opened (the spiritual third eye), ‘thy whole body shall be full of light,’ as Christ stated in the New Testament (Matthew 6:22).

Of further significance, we note that the Buddha was born, and achieved enlightenment, and died during Taurus. In Taurus we find a burning desire to know and to gain knowledge through experience. Again, there is a connection to the Buddha’s teaching through his example of developing mind as a means to attain enlightenment.” ~ Alice A. Bailey

Those of us who can live in the light of the star, Aldebaran, have the ability to stay fixed and steady upon our goals, as long as we do not become rigid and stubborn. But if we are willful and strong-minded we can accomplish whatever we set out to do. In fact, the star of Aldebaran, the “eye of the bull,” is known as the place where the will of God is known.

So, as we evolve we have an enormous capacity to visualize and manifest both on the earthly and spiritual planes.

If you want to find out more about how the planets may be bringing changes to your life, go to the Free Transit Calculator and enter your birth date. And, if you’re curious to learn what your Horoscope says will be happening this year in such areas as your love relationships, and marriage prospects, as well as career, investments and health in 2016: Order your customized Report: Your Horoscope & Future in 2016-17.

If you want to learn about your unique personality, strengths, weaknesses and talents, order your: Personal Horoscope Report. It includes a copy of your birth chart.