“I Hate Downward Dog” & more Confessions of a Basement-Dwelling Yogini. 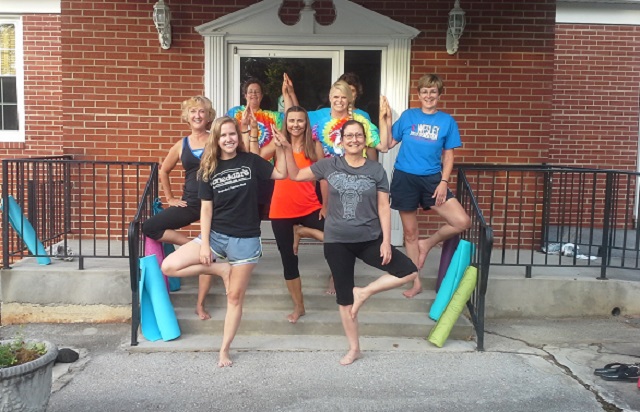 I realized early on in Yoga Teacher Training that I would never make the grade as a studio instructor.

Being upside down, on the rare occasions that I can get that way, does not enthrall me. I hate downward dog—I mean, I really, truly hate it. My yoga garb is distinctly unyogic and more Dollar General than anything.

When my fellow yoga instructor students were swooning over almond milk and turmeric, I was counting the minutes until I could get home to a bowl of spaghetti, with red meat no less, and a big glass of wine. I actually have no idea what my pH is, and I don’t care. I haven’t a bead, a mandala, an essential oil or a self-help book to my name. Drum circles remind me of the “Little Ricky Learns to Play the Drum” episode of I Love Lucy. My Sanskrit stinks. And paddle board yoga? I can just see myself, unable to do anything on that board except lay flat in savasana, drifting out to sea in a sort of Yogic Viking Funeral mode, with mourners on the shore Namaste-ing me into the next world.

I spent too many years in Jazzercise to not cut up, laugh, sing, speak out and be lively when I am working out, and that does not generally play well in the yoga studio atmosphere that has been described to me by more than one nonplussed fellow yoga classmate over the years as “Sacred Space.”

This all left me at rather a loose end when yoga teacher training ended, and by some miracle of God I was certified in spite of myself. I did not want my hard-earned credential to go to waste, so I started to consider what kind of volunteer opportunities there were for someone in my position.

I eventually approached my church about starting a ladies’ yoga class and since then, my Tuesday evenings have been officially spoken for. I went from the fire of the Yogic Sacred Space to the frying pan of God’s sacred space. I started teaching in spite of myself.

And here’s what I’ve learned about the benefits of Church Basement Yoga:

Methodists are hearty, down-to-earth folk. My yoginis happily use well-washed thrift store neck ties as yoga straps, and paperback books that I dumpster-dived for at the bookstore and duct-taped together as yoga blocks. One of my yoginis is actually possessed of a sewing machine, and repairs our straps as needed. We are like a Pinterest Yoga Craft Board come to life.

I have always struggled with savasana, which is generally silent in the studio. In our little Tennessee mountain church, it resounds with a spiritual song, be it something contemporarily Christian, a spin on a traditional hymn, or something eclectic like Copeland’s Appalachian Spring or Louis Armstrong’s What a Wonderful World (hands-down class favorite).

Our church basement has pew seating around its perimeter. I could not go to the wall and do a handstand even if I wanted to. God’s ways aren’t all that mysterious, sometimes, after all.

7. Aparigraha: Can I have an amen?

Aparigaha speaks to non-attachment and, by extension, to not being unduly involved in acquisition and gain. The church practices this by furnishing us with rent-free space, so our classes are totally without cost for participants. With the cost of studio yoga classes in our area being well over $10 a class in most circumstances, our church class means that women who might otherwise consider yoga unaffordable or over-budget can have a crack at it.

Modern American society is hard on us ladies who are too young to die and too old to be egg donors. Taking our 50-60-ish egos and our 50-60-ish bones and joints into a yoga studio can be a real confidence-beater when we find ourselves surrounded by nymphs, sylphs and cross-fitters who can literally bend over backwards and do so at every opportunity. Having our discomfiture met with admonitions to “let go of your (already beaten) ego” doesn’t help matters much.

None of that in our church basement! We work out hard, but leave the highly esoteric and show-offy poses out of it. There’s nothing wrong with those poses for those who enjoy them, but it’s just not our thing. That allows all of us—and we range in age from 20 to 70—to feel good about what we can do and push ourselves to do what we can’t, without fear of ruining anyone’s yogic ambience or feeling out of sync.

Because we practice in such an informal environment, there simply is no yogic silence. My students are used to my Jazzercise-esque banter (breathe, woo-hoo!) and are not shy about replying in kind. What’s more, when someone’s joint randomly pops or pings, that person owns it proudly and with gusto. We engage in a sort of “can you top this?” joint-popping competition.

I generally do not use Indian-style or chanting-type music for classes, as it doesn’t mesh all that well with my style or the informal environment. We work out to a fusion of pop, oldies, country, contemporary Christian and standards. There is a weekly meditation theme set (home, joy, nature and life is good), with music to reflect it. Singing along a few bars with a favorite tune or asking “Is that Eric Clapton?” during class is totally allowed, and there’s probably nowhere else in the world that people are doing yoga with the likes of Barry Manilow, Megan Trainor, Zac Brown and the Beach Boys all on the same day.

We do an aerobic-style, 10-minute or so warm-up at the beginning of each class. It is terribly unyogic, I know. However, as a nurse, it pains me to think of diving right into twists, stretches and muscle-challenging poses without a good, old-fashioned full-body warm up first. I like to use oldies for this so a little bit of a go-go warm-up is always—pardon the pun—a go-go.

Since we practice under the auspices of a church, we always wrap with a simple prayer. Generally, gratitude and a word or two on the mediation theme of the day are expressed. We know each other well enough after over a year together to share joys and sorrows in prayer as well. As my yoga teacher training instructor always taught me, yoga is about community.

This is what I say to newcomers who look sheepish or embarrassed when they are not as adept at a pose as those around them. It is also what I say to more practiced yogis who fall out of that Warrior Three or Eagle Pose that they might find challenging. It is what I say to myself when my lousy Sanskrit fails and I have to fly by the seat of my pants when calling out the name of a pose. Come to think of it, “fly by the seat of my pants” sounds like it should be a yoga pose name.

Obviously, church basement yoga is not for everybody, and certainly not for the very serious-minded or classical yogi. But for me and my faithful band of 10 or so once-a-week yoginis, it works. Having women who otherwise wouldn’t be doing yoga, or working out at all, tell me “I’m comfortable here,” makes all 200 of those yoga teacher training hours totally worth it. 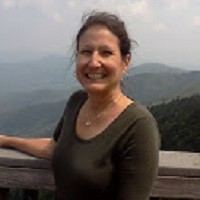