Loving-Kindness, Words of Wisdom & A Week of Tragedy. 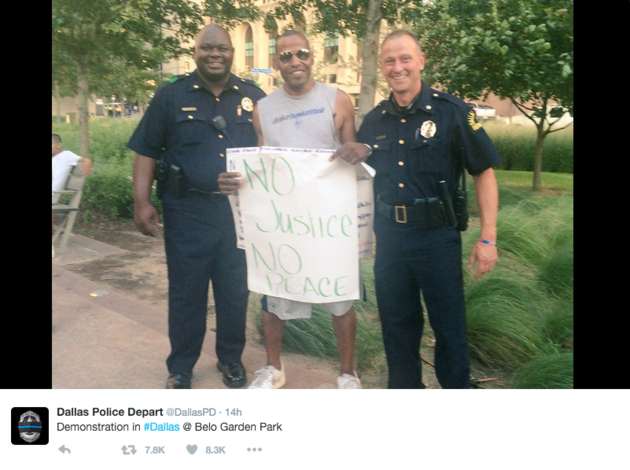 When I woke up last Tuesday morning I did something I normally never do. I checked Facebook right after waking up. And what I saw ruined my day before it had even begun.

I watched a video of a Baton Rouge, Louisiana “officer of the peace” mount 37-year-old Alton Sterling, a black man, like he was mounting an animal—a man already restrained—and shoot him dead. And my heart sank. Here we go again.

I tried to salvage the day by doing my daily asana and meditation practice. I did what I always try to do when ugly intervenes in my life—I did a loving-kindness meditation.

May you be well. May you be happy. May your heart be open and filled with loving-kindness. May you enjoy true peace in your life, I said silently to the police officer(s) who killed Alton Sterling.

And so I went on with my day, saddened but fairly free from anger and rage.

I woke up the next morning and repeated the thing I normally never do—opened Facebook in the morning—again. And again I was devastated by what I saw. This time the video was the live stream that Philando Castile’s girlfriend began videoing after he had been shot several times by a police officer.

On Thursday morning, I dared there to be any more bad news. Good thing I wasn’t gambling because I would have lost. This time I was faced with the grim and horrific news that a sniper, following a peaceful Black Lives Matter march, had murdered five Dallas police officers.

What I couldn’t shake though, was profound sadness and despair—a feeling of just wanting to give up. For the rest of the week, I fell into a malaise of helplessness that I couldn’t seem to climb out of.

I’ve been an activist all of my life. I’ve never felt helpless to change the things that needed to be changed to make this world a better place. But I’m 68 years old. I feel like this country is regressing. And I feel tired.

I’m tired of excuses being made for the gun insanity that permeates this country, whether it’s police violence, mass murders, or senseless nut jobs like the gun advocate mother who murdered her own daughters.

I’m tired of racist, xenophobic, misogynist rants by scared, misinformed white people. I’m tired of the excuses being made for these people.

I’m tired of watching videos of black men being gunned down by the police, and videos of white men brandishing hatchets, shotguns and hand guns while the police talk them down without firing a single shot.

But I‘m also an optimist; so being sad is not my normal state of being. Finally the universe stepped in and gave me a lifeline out of my unlikely despair.

On Sunday morning I was listening to the radio show, On Being with Krista Tippett in conversation with one of my favorite people in the world—Elizabeth Gilbert. Krista mentioned the words from a poem by Jack Gilbert, a much acclaimed, but little known poet. The poem is called “A Brief for the Defense.”

“We must have the stubbornness to accept our gladness in the ruthless furnace of the world. To make injustice the only measure of our attention is to praise the Devil”

And with those words, the malaise began to dissipate and my despair began to lift. For it’s true. There is much beauty in this world—things that bring us joy and gladness despite the ugliness that sometimes obstructs our view if it.

“I want to live in a society filled with people who are curious and concerned about each other rather than afraid of each other.”

The lessons we need often show up in the unlikeliest of ways. I hadn’t listened to On Being for months. It just so happened that the latest show was the conversation with Elizabeth Gilbert.

I believe my daily loving-kindness meditation also helped to bring about the confluence of circumstances that lead to my release from the grips of sadness. “May my heart be open” I repeated daily. My heart was open—to accepting “gladness in the ruthless furnace of the world.”