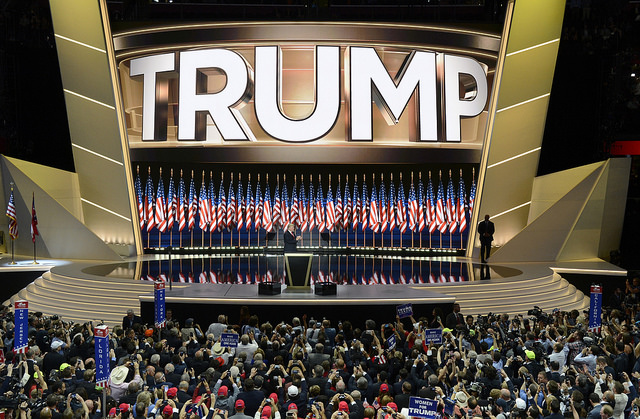 Donald Trump has now surpassed, in my mind, global warming, world hunger, and overpopulation as the single greatest threat to human civilization.

It is simply not possible in a community of nations, whose power is carefully balanced, and where some states can destroy the world many times over, for the most powerful among them to be lead by an impulsive narcissist, with sociopathic tendencies, without the grave risk of thermo-nuclear annihilation.
~

“A man you can bait with a tweet is not a man we can trust with nuclear weapons.” —Hillary

Human relationships are simply too fragile, the stresses of high office too great, the propensity to band together in war too unconscious, and the balance of power too precarious for us not to take seriously the possibility that an unhinged Trump might very well ignite a train of events that would lead to destruction.

Now my most sane and grounded friends believe this reactive and hyperbolic. They argue that if Trump were to win, he would be hemmed in by a system of checks and balances, a mainstream cabinet and advisers, an unsupportive Congress, and his own incompetence. And this would keep him from carrying out his most diabolical schemes. But Trump is no ordinary Republican and this is no ordinary race.

It is often argued that Trump appeals to people the global economy has left behind. They have been left behind by rising inequality and undermined by the same politicians they helped elect. They lack the social skills to fit into a multicultural society and the mental agility to cope with complexity. They grew up expecting more and now feel their culture has been hijacked.

This may all be well and true, but why a New York billionaire, with no ties to the heartland, who is inarticulate and dishonest, with no record of public service? Trump’s agenda is hazy, his policy proposals thin, and he is clearly out of his depths. The idea that they think he can save them insults their intelligence. They may love him, may want him as President, but it does not imply they think he can run the country.

A less sympathetic view suggests they are seeking a dominator-in-chief. They want a “winner” who can tell it like it is and do so forcefully. From this vantage, Trump’s humiliation of primary candidates signaled to them authority, while his wealth proved competence. They don’t want an effective candidate to articulate their agenda but rather an authority figure to line up behind.

And this too may be true, but why Trump? Virtually all of his primary opponents were more articulate, experienced, and politically competent; and some, like Cruz and Christie, are practiced bullies. These are men who know how to wail on liberals and humiliate opponents. But perhaps Trump supporters wanted something more than another authoritarian bully. Perhaps they wanted something far less rational and less conscious. And here is the real danger.

Trump’s irrationality, his lack of a serious agenda, his willingness to break all the rules, his incessant bullying, his ability to play on the fears of a hypnotized crowd, all appealed to something deeper than simply the need for a competent authority or even a savior. And what Trump appealed to was their own primal drives, long held in check by the same liberal society from which they had been outcast.

Suddenly, Republican voters were free from the shackles of having to justify a contradictory agenda; suddenly they could throw off the cloak of respectability. Now all the hatred needs no justification; the nihilism need not make sense. Far from articulating their hopes and fears, far from giving them something with which to identify, Trump freed them from the need to explain themselves. And perhaps this, above all else, was the greatest pressure they felt from liberals, made all the worse by a competent and popular black President. Liberals made them feel like losers and they wanted to be winners without having to win. And at this, Trump was the master.

What liberals seem to miss is that Trump is an articulate spokesperson of his followers needs precisely because he is so inarticulate; he is the best representative of their agenda, because neither he nor they know what they want. Trump possesses that rare capacity, common perhaps only to fascist leaders and TV news reporters, to look authoritative while blathering nonsense. If it sometimes seems that he grows more popular with each insane pronouncement, perhaps it is because his popularity rests on his striking capacity to make no sense. For this frees his followers to vent their unconscious.

And this is where it gets really scary. A President Trump would be doing the same thing on an international stage and his opponents would be foreign adversaries. But you cannot smack down Ayatollah Khamenei without Iran erupting in nationalist fervor; you cannot go after Vladimir Putin without a military response. And what was once a fragile global order suddenly boils over into a cauldron of petty rivalries, replete with peoples in the street and the drum beat of war. Whatever isolationism Trump may espouse, he would inflame nationalist passions every time he opens that loose sphincter that resembles a mouth.

The chances this would result in nuclear holocaust are probably quite thin. But it is almost certain he would take us to the brink and, standing over the abyss, revel in his power, as he ignites the world in hate. For what better way to ignite the base; what better way to cleave to the state. And if you think this is hyperbole, just look at what he has done to the country and multiply it by the world.

Fascism in the Shadow of the Eternal Present.