Update: President Obama addresses Dallas attacks in press conference from Warsaw, Poland, where he is currently attending NATO summit (skip to 7:35 to watch):

“I spoke this morning with Mayor Rawlings of Dallas to convey the deepest condolences of the American people. I told him that the federal government will provide whatever assistance Dallas may need as it deals with this tremendous tragedy.

We still don’t know all the facts. What we do know is there has been a vicious, calculated and despicable attack on law enforcement. Police in Dallas were on duty doing their jobs, keeping people safe, during peaceful protests. These law enforcement officers were targeted and nearly a dozen officers were shot. Five were killed. Other officers and at least one civilian were wounded, some are in serious condition and we are praying for their recovery.

We are horrified over these events and we stand united with the people and the police department in Dallas.

According to police there are multiple suspects. We will learn more about their twisted motivations, but let’s be clear there is no possible justification for these kinds of attacks or any violence against law enforcement.

Anyone involved in these senseless murders will be held fully accountable. Justice will be done.

Yesterday I spoke about our need to be concerned as all Americans, about racial disparities in our criminal justice system. I also said yesterday our police have an extraordinarily difficult job and the vast majority of them do their job in outstanding fashion.

Today is a wrenching reminder of the sacrifices that they make for us.

We also know that when people are armed with powerful weapons unfortunately it makes attacks like these more deadly and more tragic. And in the days ahead we are going to have to consider those realities as well. In the meantime our focus is on the victims and their families.

Police across America, it’s a tight knit family, feels this loss to their core, and we are grieving with them. As a nation let’s remember to express our profound gratitude to our men and women in blue, not just today, but everyday.”

It’s been a heart-wrenching day to watch the news.

Bad news is cascading across the country, with an under current of violence that seems unwavering.

At 8:45pm, during a peaceful Dallas protest which mourned the deaths of Philando Castile and Alton Sterling earlier this week, shots rang out through the crowded streets. As protesters were shuffling away, ready to return to their families and friends after a day of mourning, solidarity and contemplation, 2 snipers fired shots from an elevated position and killed 5 police officers, with at least 6 more injured.

Despite the conflict between police and protesters, the Dallas protest was well organised and had been otherwise uneventful, with officers live tweeting the rally and posing for photos with protesters. Early reports suggest that some officers were so moved by the way this rally was conducted that many joined the crowds and marched through the streets of central Dallas, remembering the men and women subject to police brutality.

In recent news, Chief of Police David Brown has released a statement claiming that 3 people have been detained in relation to the shootings, and a fourth is continuing to exchange gunfire with police as they attempt to negotiate surrender.

The shooter has told negotiators that “the end is coming” and he “is going to hurt and kill more of us, meaning law enforcement. And that there are bombs all over the place in this garage and in downtown”, Brown stated.

“We are being very careful in our tactics so we don’t injure our citizens in Dallas as we negotiate further.”

And as I’ve been following the gun violence and the #BlackLivesMatter across my Facebook feed today, a thought crossed my mind—it’s not what we see, but how we’re seeing it.

Are we actively or passively consuming the news?

And are we realizing that even if we’re not on the scene, what’s happening does indeed affect us—personally, community-wide and globally? It’s a systematic violence that we do need to concern ourselves with.

I get that we’re all busy and sometimes all we have time for is to passively scroll through the news, just so we’re informed and conscious citizens. But Facebook Live is shedding new light on how we see our news, and quite honestly when I stumbled across this video tonight, I was shaken up. When we’re taken into the moment by a bystander wanting to capture violence for the world to witness, it’s not easy to remove yourself from the situation.

This could have been any of us walking down the street and stumbling upon gunfire exchange.

Facebook Live video streaming poses ethical and legal questions to how we report the news, and it’s shedding new light on what justice means for equality of all lives.

Facebook Live will be the new normal. Which leads us to the point… pic.twitter.com/qSi94CyLiw 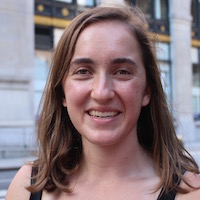 Caitlin Oriel is a Boulder native. She teaches Earth Ways Yoga locally. Her time-tested remedy for surviving life’s struggles is taking the time to watch the sun set out in … Read full bio