The Naked Selfie Experiment that fuelled a Revolution. 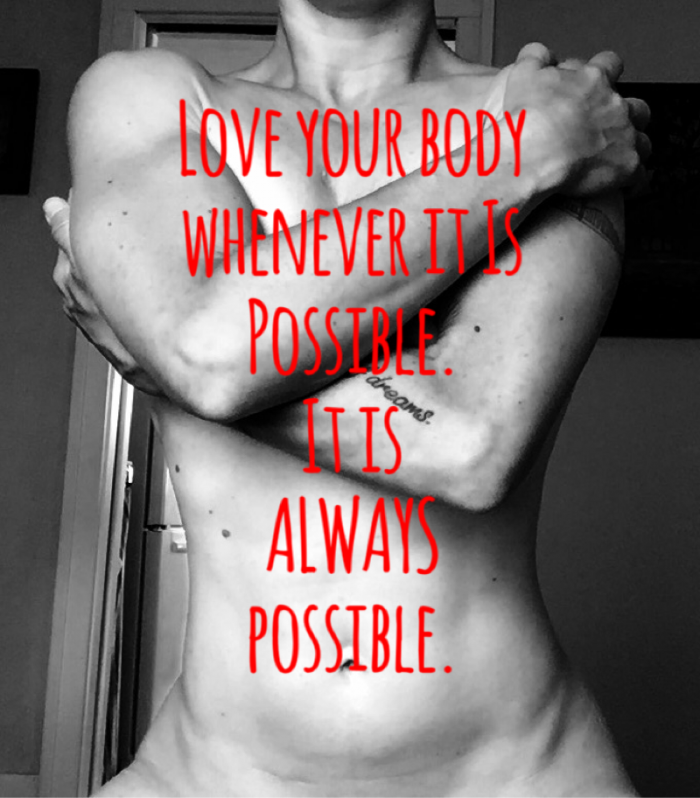 Over a year ago, I started taking pictures of myself naked every morning.

I felt like this practice bolstered my confidence and showed me parts of my body I would not have otherwise seen.

Writing words of encouragement over the images also helped me focus on what was important, and frankly, helped others when I started posting the images on Instagram and Facebook. It seemed like overnight, I had created a community of people who were open to talking about how we see ourselves and what truth is when it comes to perceiving our bodies.

But the real breakthrough came when I started creating drawings. With them, I could convey these same messages of inspiration, self-love and confidence without tying them to my body. I could make the messages more universal. 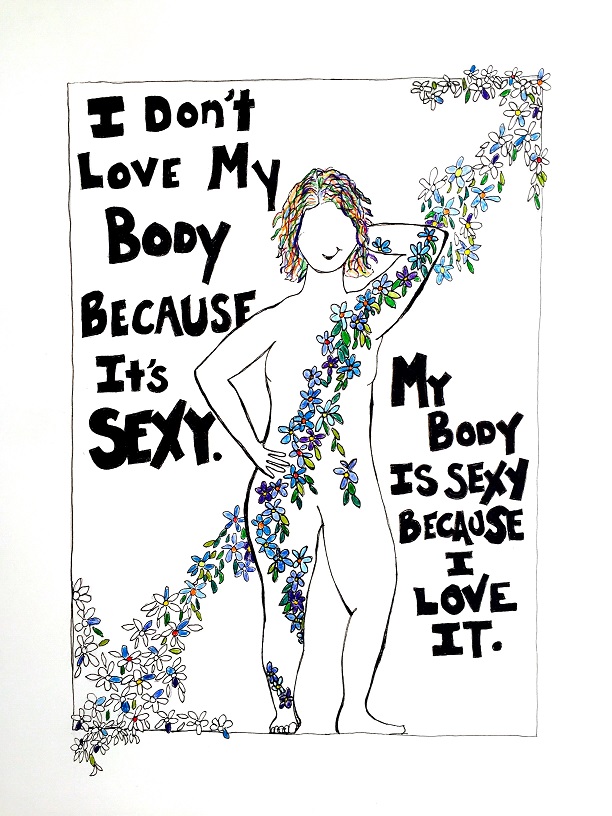 After a few weeks of creating these drawings and hanging them all over my bedroom walls, I noticed my perspective shifted. I realized that I was creating messaging that was in fact re-wiring my brain to stick it to the man.

Surprising way to end a paragraph, I know, but hear me out.

We are inundated with messages, large and small telling us we need to be different: smaller, larger, smoother, lighter, darker, happier, freer, wealthier, the list goes on and on. We do not get a lot of messaging saying, “hey, you rock! Keep that sh*t up.”

The more my walls were filled with these messages, the more I was able to reject the constant messaging that pervades our social landscape.

It freed me up to speak out whenever I saw it. I took the opportunity to tell teenage girls to ignore people who tell them how to be. I was freed up to tell anyone who would listen that the most important thing is to figure out who they are and live that sh*t righteously and without apology.

I began to see self-love as a revolutionary act: the more I did it, the more I saw the brainwashing that goes on in almost every area of society. I began to see that this in fact is what is at the root of most of the world’s evils; not allowing people to be who they are, no matter who that is. I began to see myself as a rebel.

And my rebel yell? It just got louder and louder.

Then everything started happening. Well, it actually didn’t start happening, it became clear to me, through social media and the like, that there are people in the world who walk around scared every day. Some of these scared people commit unspeakable acts of violence on others, making other people also scared to walk around.

It made sense to me, maybe even in an overly-simplistic manner, but I saw all of this as a disconnection and even a hatred of the self enacted outwardly. It is all, I thought, a bunch of people outwardly expressing the pain they feel, because looking in is too scary.

When we feel that we have very little, then we fight extra hard to protect it. The socio-economic factors that cause a disparity in resources, create a sense of hopelessness and competition among us.  After all, the less we feel we have, the more easily we can blame others for our shortcomings. The more we are told that we are threatened by people who hate us for what we have, the more protective we become, but in the end, there is really nothing to protect. In the end it is about remembering who we are and understanding that no one can take from us what we do not allow. No one can have what we do not give away.

So what can I do when I see the way society has been engineered to make me fear—or worse, hate—those who are different, or those who insult and hurt me for the choices I make?

Again, it goes back to sticking it to the man. The man wants me to hate, to fear, to damage the “other.” So what do I do? I have faith. I show love. I give the benefit of the doubt, even if I have to focus all of my intellectual and emotional strength on doing so. I know, that as a human, the things that I need most is love and acceptance.

It starts with the parts of me I would rather not look at: the dark, jealous, sarcastic person who comes out when she feels threatened. I do my best to love her. To accept her. The more I do that for her, the more easily I do that for people when they are having a bad day, or acting out their fears, or doing something that makes me question humanity.

Making Peace with Your Body, Once & For All