How Going Paleo Balanced my Up & Down Moods. Editor’s Note: This website is not designed to, and should not be construed to, provide medical advice, professional diagnosis, opinion or treatment to you or any other individual, and is not intended as a substitute for medical or professional care and treatment. Always consult a health professional about  before trying out new home therapies or changing your diet.

I have been a Paleo eater for the past eight years, and it has completely changed my life.

For those of you that don’t know, the paleo diet is short for “paleolithic”—also known as the “caveman” diet, and includes grass-produced meat, fish/seafood, fresh fruits and veggies, eggs, nuts and seeds, healthful oils (Olive, walnut, flaxseed, macadamia, avocado, coconut), and eliminates/minimizes sugars, grains, dairy and beans.

This new way of eating came as a result of discovering my inability to process sugars and starchy foods.

As it turned out after some investigation—I was hypoglycemic.

I had no idea how much food was impacting who I was until this dietary shift came into play. I just thought I was a sensitive person who was and always would be on an emotional rollercoaster, experiencing huge energy fluctuations—hyper, laughing and excited one minute, and crying and in despair the next. Energized and full of life one second, and exhausted and overwhelmed the next.

While it is true that I am more sensitive and emotional than the average person, it turned out that emotional balance was still within reach—and that emotional rollercoasters were not a necessity to being alive.

I just didn’t know it yet.

For as long as I could remember, I always woke up in the mornings feeling shut down; I would feel nauseated for the first hour or two of each day and couldn’t eat anything until this feeling had passed. This was “normal” to me for most of my life. Those closest to me labeled me as “being in a bad mood in the morning.”

That being said—it was nothing a cup of sugary, creamy coffee and a candy bar for breakfast couldn’t fix (to give you an idea of what I was eating for the first 25 years of my life).

But starting in my late 20s, I started noticing some new symptoms that seemed out of the ordinary.

If I ate sugar on an empty stomach, I had an uncontrollable urge to lie down and sleep and woke up severely groggy, as though underwater. If I went an hour and a half without eating, I started shaking, feeling panicky and struggled immensely to answer simple questions and make decisions.

One of the most extreme experiences I had (the very experience that prompted me to seek help) was eating a banana on an empty stomach while rushing to get somewhere. I wound up having full-body pain and became so fatigued I could barely walk. I had to lie down and pass out for twenty minutes. I wound up with a severe stomachache for two or three days after that. (As I later learned, P.M.S. and menstruation can dramatically increase symptoms of sugar reactivity and blood sugar crashes, which is what was happening to me at the time.)

When I first started noticing this ever-increasing cycle (at about the age of 29), I initially solved the problem by eating sugar, because if you are “low blood sugar”—logically, in my mind—then you needed to raise your blood sugar levels, right?

So, I’d stop in the store and grab a Snickers bar.

And while to some degree this is true, this immediately stopped all of my symptoms in the moment and I would go back to feeling “normal”—the manner of dealing with the problem was a short-term fix that was only perpetuating and worsening the problem in the long term.

I recognized that something wasn’t right, and though I made my best guess that this was “hypoglycemia”—based on my limited knowledge growing up in a family of western doctors—I wanted to know for sure.

I live in Boulder, Colorado, land of natural healing, so of course, I made my first appointment with a Naturopath, Charley Cropley, to see what I could figure out.

And that was the first step of many over the past eight years of regaining my health, overall balance and happiness. (Thanks to Charley, who totally changed my life.)

The short version of what happened is that Charley ordered the three-hour glucose tolerance test (GTT) for me at a local lab (which did indeed show my sugar reactivity), had me keep a food journal, and then started me on a diet that included only animal and fish protein (meat!), green vegetables and fats—the makeup of a paleo diet.

I cut out all sugar, starchy carbs, caffeine and alcohol. As a by-product of this diet model, this also meant cutting out gluten and dairy, which also created significantly positive change in my health overall (in addition to learning through this elimination that I had an intolerance to these foods. But that’s another blog for another time.)

In addition to helping me figure out what to eat on a paleo diet, Charley guided me through a series of fasts and cleanses and even taught me how to (for those of you that are faint of heart, close your eyes!) give myself an enema.

I was on a cleansing mission and I had never felt better. I went cold turkey and did not deviate from this diet for the first solid year. I was hiking three to four times a week (45-60 minute hikes, short and frequent), attending two to three yoga classes a week, sleeping 8 hours every night, and literally skipping down the mountain on hikes, singing and smiling for no reason.

After becoming a paleo eater, I generally felt happy for no reason in particular and I enjoyed eating more than ever—even though it meant giving up so many of my favorite foods—simply due to how much better I felt.

Sure, I had to eat a lot to feel full and now that I wasn’t eating starchy foods and sugars, I had to eat more frequently. But food had never tasted better. I was a protein-metabolizing machine. My body was working how it was supposed to because it was getting the proper fuel for its sensitive needs. I learned to carry snacks and backup food with me everywhere I went.

As long as I had food to eat, I was a happy camper.

It was my newest and best recipe: eat food, feel great.

It was as simple as that.

And, over the years, my symptoms have drastically shifted to quite mild. I can even forget to eat sometimes which I didn’t have the luxury of doing in the past as my body would react so strongly it couldn’t be ignored.

Some people say, “What is there left to eat once you cut out all the good stuff?” but I assure you; there is so much amazing food out there.

The Paleo diet may not be cut out for everyone as their central strict diet—some people really require more carbohydrates, grains and metabolize them incredibly well—but there is so much to learn from experimenting with Paleo eating, and so many yummy dishes to try no matter what your diet is. (Unless, of course, you are vegetarian or vegan, wink. Though there will still be great veggie dishes in there for you.)

From Vegetarian to Paleo: the Ins & Outs. 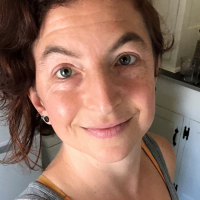 Rachel Leber is a columnist at elephant journal, and is currently in her third year of school to become a Naturopathic Doctor. She is also a lifelong singer/musician, and othe… Read full bio