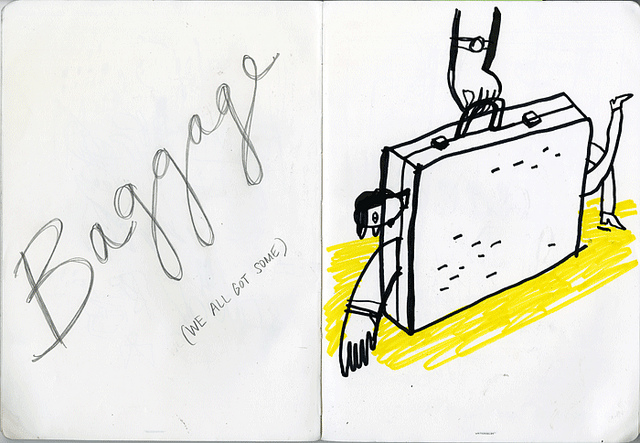 “You thoroughly confused mind,
By the piling up of whatever objects
You are attached to,
Misery a thousandfold will ensue.” ~ Shantideva

We all carry the excess baggage of our problems.

At some point, we figure out that letting go is the only solution.

We don’t need a book or a person to make us recognize the truth in this. Intuitively, we know detachment is the right thing to do because at the end of the day, our main issue lies in being too attached to almost everything in our lives.

Attachment is a profound problem. But the root of this problem is applying its solution inappropriately.

I struggled for years to find the true meaning of detachment. To this day, I make every effort to refrain from falling into what I thought letting go was about.

I, like many others, mistook detachment for indifference. I maintained a fear surrounding “letting go” for years, as I feared becoming a ruthless person—I also feared losing my object of attachment.

We think in order to detach, we should thoroughly abandon our object of attachment. As a result, we work on letting go on the physical level which will soon prove to us that our detachment technique was utterly misunderstood. Consider the example of attachment to a person. To detach, we become rude to this particular person and cut off all contact. This kind of detachment works as long as the other person is absent. However, we soon realize that we are as attached as before when we see them again.

Another false kind of detachment involves arrogance. We let go because we think we are better than others and so, we become insensitive without realizing it. Take as an example our attachment to being entitled to our own opinion (and that opinion being right) in a debate with another person. At some point, we let go of proving ourselves right, however, we do it not out of true conviction; we let go because we think the other person is stupid and we’re better than him or her. And thus, there is no need for this meaningless debate to continue.

The last kind of detachment I came to notice in others, is the one that involves the fear of losing one’s self. They think if they detach, they will abolish who they are and what they believe in. Hence, attachment to their ideas and beliefs acts as a reinforcement to their identity.

I am now convinced that detachment has nothing to do with indifference, the physical, or the ego. It doesn’t mean abandoning or becoming rude and it certainly doesn’t mean abolishing who we are.

To start off, detachment is a mental process—this is where it begins. From my own experience, I have noticed that I can literally live on a daily basis with a few persons to whom I was attached. The reason is, letting go has started from how I perceive these particular persons. To be more specific, I don’t mind if X or Y is present in my life. I don’t mind either if X or Y isn’t present in my life.

It’s impossible to be attached to anything or anyone if we realize its impermanent nature. Thus, thinking that this or that will cease from existing anyway (maybe in a month, maybe in a year), we won’t crave to make it stay or last.

Even when we’re arguing or debating about something, we will detach from our principles the moment we ascertain that they’re impermanent. Personally, whenever I feel the need to prove myself right, I instantly fast forward a day or two and realize that neither me, nor the other person will recall the argument—we’ll mostly be laughing about it in 20 years.

In that moment, I renounce proving myself right.

I take this step, not because I think I’m better, but simply because none of this will make sense in one hour, let alone in a year. I would still take part of the conversation, but with my ego less involved. I wouldn’t mind if the other person has won the argument or if my opinion wasn’t taken into account.

That being said, detaching from my opinions doesn’t abolish who I am. Sadly, most of us mistake detachment for not taking action. What we’re oblivious to is that letting go never diminishes our identity. In fact, it strengthens it to a better one—one that doesn’t involve egocentric behaviours. Rather, an identity that promotes love, understanding, equanimity, and living equally with others. So, we still can take action but one that is motivated by love, and not hatred or a sense of competition.

In short, to detach is to keep everything the way it is. The only amendment that must take place is inside. In fact, I have noticed the more I let go, the more I am generating loving-kindness for everyone around me. I am truly convinced that I become ruthless only when I get too attached to people or opinions. The fear of losing someone or something generates within us feelings of hostility as we are constantly worried about how and when we’re going to lose our object of attachment. In contrast, when I am unattached, I realize I am losing this object sooner or later and thus, become more compassionate and enjoy the present moment.

If only we think of the nature of impermanence residing in everything and everyone, we won’t be attached to anything ever again.