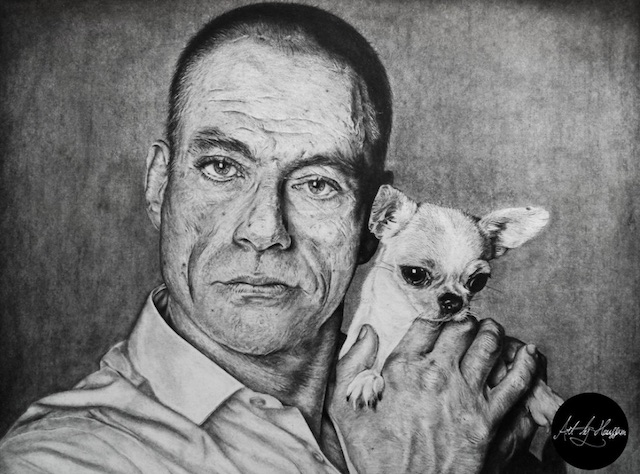 The Libran male is a hopeless romantic as Venus, the planet of love, romance, beauty, union and harmony, rules his sign.

The sign of Libra falls between September 22 to October 23.

He loves love and willingly falls quickly and hard into its depths.

He is the ultimate gentleman who lives to give love. He also lives to receive love and his ultimate wish is to feel encapsulated in an intimate, mutual, heart-centered love that feels balanced, equal and harmonious.

He knows who he wants and when he finds a complimentary match, wild horses won’t stop him. He fearlessly chases his desire, refusing to give in or let go without a fair amount of persuasion and fight.

Although Librans adore all things luxurious and beautiful, he discovers the true sense of beauty in the simplest details, especially what exists underneath your skin. It isn’t enough for him to see with his eyes—to entirely appreciate you, he also needs to feel strongly with his heart.

The Libran male is a rare breed, as he is an emotional, nurturing, sentimental and loyal. If he feels drawn toward you, it is because you have a smooth and irresistible blend of intelligence, spirituality and physical attributes. He shares with you an intensely emotional, mentally stimulating and sexually satisfying connection.

He is a breathtakingly expressive lover—he will cherish, flatter and pamper you with attention, adoration and affection forever.

He spends time on the smallest details—he shows his love and devotion with his undivided attention. Because he’s a man of balance, he is only content when he receives the same kind of attention in return.

Librans are well-known for being highly charged in the early stages of a relationship before becoming lazy and subservient lovers with the potential to be unfaithful. However, his attention and affection only fade out he feels under stimulated, disillusioned, disinterested or neglected. If he is committed in love, it’s unlikely he will stray.

The Libran man is a highly sensitive, passionate, shamelessly flirtatious creature—he is proud of his sensuality, seduction and sexual prowess. If you are possessive or insecure, you may struggle with jealousy and understanding that these traits are part of his character.

He radiates charm and charisma and this makes him appear intriguing, mesmerizing, suave and strikingly handsome, causing both males and females to feel magnetized toward him. Do not be surprised if one moment he is a lady’s man and the next a man’s man, as he effortlessly taps into and sways between his feminine and masculine sides.

He is caring, considerate and compassionate and can be a great listener, if it is an interesting subject he cares about, otherwise he may zone out while nodding and “hmm-ing” to keep up the feigned pretense.

He strives for justice and experiences a sense of inner peace when all is fair in love and war. He is a peacekeeper who looks for the good in everything, and he isn’t one to get involved in conflict, which can be a little annoying if you want him to take your side.

Instead he cautiously weighs everything before delivering a verdict. Even then he is mostly known for remaining neutral as he is intuitive, perceptive and has the gift of insight, which offers him the ability to clearly see all angles.

Librans can be quite passive which makes them terrible decision makers—he won’t want you to take full control nor does he like shouldering too much responsibility. He will feel content if you can share considerations and when major decisions have been talked through, balancing all possibilities and when you have mutually agreed upon an outcome.

He is a realist therefore you might notice that he prefers to only keep a few authentic close relationships rather than a crowd of people wearing masks and feigning a fair-weathered friendship.

Trust is high on his agenda and once he has committed his heart to you he is usually faithful and will pour himself into the relationship hoping it is one to last for life. Therefore, if you break his trust it is unlikely that he will pick up the pieces and fully recover. If he feels the damage is unsalvageable he will probably cut his losses and without hesitation walk away. Although, this decision for a Libra would be a last resort as they believe in fairytale happy-ever-after and often hold on to relationships and go to great lengths to save them even when it’s clear the end is long overdue.

It is useless trying to play mind games with the Libran male, as he is observant, sharp and he doesn’t suffer fools. He instantly sees the ball rolling toward him and he won’t hang around to pass it back.

Passionate Libran males can be hotheaded and fiery and although they love intellectual conversations and debating, they do not particularly enjoy feeling overly challenged, especially when they feel they are being proved wrong.

He will speak his mind and convinces himself that he doesn’t care what anyone thinks of him. He generally has a thick outer layer but he is really quite tender and fragile underneath.  To combat this, he tries not to pay attention to other people’s judgments so he doesn’t have to absorb them. He is a “take me or leave me” type character and if people leave him, he is not going to stick around wasting time and energy to convince them otherwise or pining for what’s gone.

One thing Libras are known to run from is high drama and energy sucking behavior. If he doesn’t want to deal with conflict he will sweep it under the carpet, hoping it will disappear.

If someone tries to draw him into a confrontation, he may initially stand his ground and say his piece, but once he has voiced his opinions he generally wants out. This is partly because Librans are defensive and don’t really like hearing other people’s thoughts and opinions of them.

He is an over-thinker and at times he reads too deeply into things and may become paranoid, believing that he is being personally insulted in uncomfortable conversations. He can be particularly difficult to communicate with if he feels he is being psychoanalyzed, taken for granted, manipulated or patronized and he may become quite controlling, hostile and stubborn when defending his point.

He adores being right and although he is good at balancing matters when it comes to other people, his pride and ego get in the way when he is the one of focus. This means he can become childish and shut down and he isn’t often open to criticism, even when it is mindful or constructive.

If his feelings are injured, the Libran man doesn’t usually snap out of it easily, especially if his integrity has been questioned. If a problem is not resolved immediately it can take him some time to come around and he’s not always forthcoming with an apology when it is due. If it is a minor misunderstanding he doesn’t tend to brood, he forgives and forgets and is not the sort to be passive aggressive.

When the Libran male becomes overwhelmed, he needs calmed and soothed and will be called to return to the tenderness of nature to reenergize and restore his exhausted spirit. He will hike, cycle or climb mountains to immerse his soul and recharge in the serene forest atmosphere.

He is an adventurous, energetic, mischievous guy who requires freedom and regular periods of solitude. Wanting to feel alive and vibrant at all times, this Libran will have an eclectic mix of hobbies and interests. When he is not active, motivated and exploring he becomes sulky, moody and irritated.

He is not easily influenced—he has the inner strength and wisdom of a warrior, so if it is a brave knight in shining armor you are hoping for, then a Libran male is for you.

The Libran male is artistic, creative and cultured. He can be found in art galleries, museums, libraries, concerts, theatres or in the heart of an old architect-rich city appreciating fine food in an elegant, picturesque setting. Alternatively he enjoys stepping outside the box, taking unplanned road trips and finding a secluded beach, lighting a campfire, listening to music and conversing until the early hours about the whole universe.

The favorite colors of Libran males are usually blues and purples as these showcase tranquility, sophistication as well as mix of mystery and passion. When shopping, he will go for simple, tasteful, classic styles that reflect his humble, understated, modest personality.