Marvel’s newest Superhero is a Bulletproof Black Man in a Hoodie—‘Nuff Said. 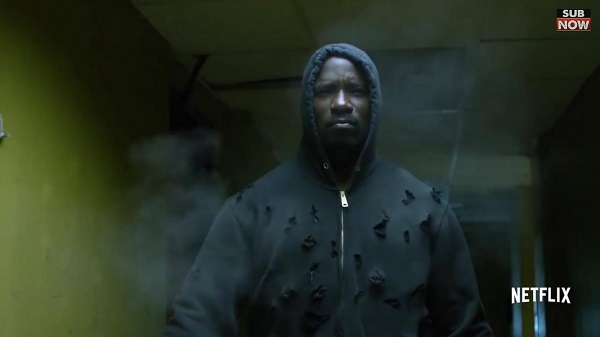 “I’m bulletproof, nothing to lose, fire away, ricochet, you take your aim, fire away, you shoot me down, but I won’t fall, I’m titanium.” ~ David Guetta

What else could a black man want right now, other than to be bulletproof?

While the latest addition to the Marvel superhero team is not a new idea, the character has been reinvented to represent the racially charged environment that we as a nation have found ourselves in with the increasing number of black men being shot and killed unjustly by white police officers.

Mike Colter stars in the new Netflix series, “Marvel’s Luke Cage,” becoming the first onscreen black-led company production. The comic book hero originally debuted in the 1970s, during the height of the civil rights era, with other black superheroes, African King Black Panther and Captain America’s sidekick, Falcon, preceding him—yet Cage was the first to star in his own title.

Luke Cage is a bulletproof black man in a hoodie—and in our current trend of #blacklivesmatter there isn’t anything more controversial or political changed.

Colter mentions that “it is absolutely a nod to Trayvon Martin,” the teen who was unjustly killed in Florida, simply because of his skin color and the hoodie he was wearing. He also references Jordan Davis and other black men who were shot because they were considered a threat.

“When you’re a black man in a hoodie all of a sudden you’re a criminal,” says Colter.

Although no one can deny the racial undertones of this show, Colter adds that it’s not all about Black Lives Matter. Yet he does acknowledge what this symbolism will mean to some, and he has been told by viewers exactly what it means to be watching a bulletproof black man on screen.

Colter is right in saying that the Luke Cage isn’t all about Black Lives matter—because what it is really about is the racial differences that have plagued the black population since before the civil rights era began.

The character Luke Cage gained his superpowers of strength and invulnerability while being victimized by the American Correctional system—yet the saddest part is that what was true over 40 years ago still is holding true to today.

One important thing to remember is none of this is new; what we are experiencing right now, in terms of racism and also police response to racial stereotypes, has been going on for forever—we just didn’t have smartphones to capture every injustice, and now we do.

We are able to broadcast every injustice we see, which makes it seems like it’s become more rampant—but in reality, we are only finally waking up to what has been occurring for quite some time.

And that’s a good thing.

As Colter points out, it’s always been Marvel’s mission “to help people understand what is happening in society through the context of superheroes and super powers, and make these conversations easier.”

Yet, even one of the writers pointed out that “it isn’t just about the Black Lives Matter movement, it’s about the power that black art has historically had in our nation.” It began with Langston Hughes, James Baldwin and many others who strived to show that their lives are not only equal but beautiful as well.

What this really is doing is empowering not only black men, but the entire black community.

We are not done casting off the roles that our parents and grandparents were forced to wear, and until we can get to a place where we truly are treated equally, with no biases to skin color, then we have to consciously make the choice to do what we know is right, regardless of if it’s the easiest thing to do or not.

Adding to the racial energy of the show is the fact that Luke Cage’s onscreen love interest is Jessica Jones, a white female super hero with her own interesting backstory. While it isn’t uncommon for couples and families of mixed ethnic backgrounds to now be portrayed through movies and television shows, it’s still not widely accepted by everyone.

However, it’s not the goal of this show to make people comfortable, but rather to show them the truths that we are facing as a country.

And the fact is race is still an issue.

We can pretend it’s not, but the reality of life still says it is. We still are conditioned under the cultural and racial stereotypes that have been a reality for all races for far too long.

People are still being told we act “black”—or “white”—or we aren’t “black enough,” or we may even being called a “traitor” for dating outside of our own “race,” or made to even be conscious of another person’s skin color to begin with.

Right now. we are feeling the effects from being taught what skin color is and that somehow it matters.

But the truth is it doesn’t—and whether or not other people feel the same way or agree with me, I will continue to find my voice and stand up for what I believe in my heart to be right—even if that means I am alone when I do so.

Marvel is making a big statement with Luke Cage, and it’s one that I completely support—because what else is more important right now than to be bulletproof if you are black man living in the United States?

This character stands for strength, integrity and believes in standing up for what is right and protecting his community—and something tells me, there are a lot of black men out there who feel exactly the same way about their lives as well.

So maybe the only difference is that Cage is bulletproof, but that doesn’t make him any more of a hero that the thousands of other black men living their lives, just wanting to leave the world a better place than they found it—without being shot unjustly in that process.