This is how Fascism Comes to America. 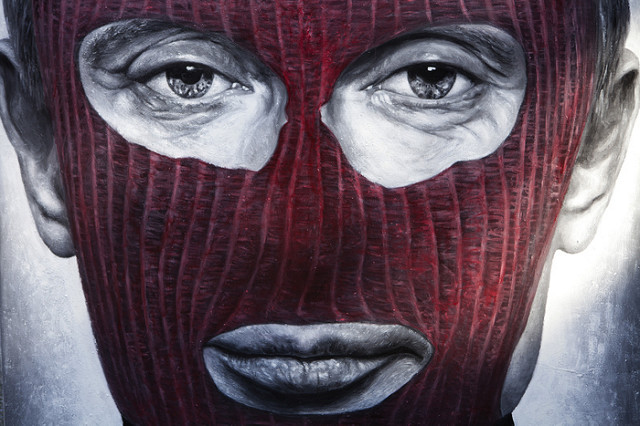 It can sometimes seem as if everyone wants to brand their political opponents as fascists, but the movement to elect Donald Trump looks eerily similar to the great fascist movements of the early-twentieth century.

It is not simply that he shares in common with them an emphasis on nationalism or that he speaks of deporting minorities. It is not merely the fact that he gains followers by breaking well-established political norms and pushes the bounds of racist rhetoric. Nor is it his militarism and threat of mass-violence.

Fascist movements rely upon “big man” leaders, like Adolf Hitler, Vladmir Putin, and Trump. The leader portrays himself as not simply a politician but something more primal and plays on this mystique of power, pumping himself up in the eyes of his followers, making of himself a sort of imagined patriarch to the nation.

Fascist movements are in this way regressive, seeking not only to bring their countries back in time but down to a lower level of development. The fascist leader appears in complex and confusing times, with easy answers, promising easy solutions. And most importantly, notes the historian of fascism, Eugen Weber, he is always a man and the sexism of his movement is a direct response to the rising aspirations of women.

There is a structure to the fascist ascent to power as well. And aspects of this structure can be glimpsed in the National Socialism of Nazi Germany, the Fascism of Mussolini’s Italy, and more recently in Putin’s Russia. A populist strongman builds a movement of the lower-middle classes that attacks the establishment. He emphasizes the failure of civility and democratic institutions, claiming he can accomplish through force what they failed to accomplish through agreement. He attacks feminists and effeminate elites, minorities and immigrants, socialists and intellectuals, claiming he can make the nation strong again.

Hitler built just such a rightwing movement in Germany fighting the communists in the streets and in barroom brawls for a decade before attaining power. Mussolini built a similar movement on the Italian Left, which slowly drifted rightward. Both relied on the threat of extra-legal force. And while Putin initially attained power as the discrete successor to the corrupt Boris Yeltsin, and while he tends to be quieter than most fascists, he is heavily reliant on a mythologized machismo and the extra-legal force of nationalist and neo-Nazi youth movements, who terrorize demonstrators.

Traditional conservatives try variously to brush these strongmen off and to downplay their dangers, but their movements are too strong and threaten to steal the conservative base of support. So, the conservatives reluctantly join with the fascists, believing they can use the fascist big men to attain power while keeping them on a leash. Thus, King Victor Emmanuel made Mussolini Prime Minister, after his Blackshirts marched on Rome and deposed the liberal government, and the aging President Hindenburg made Hitler the new Chancellor.

Meanwhile, liberals, centrists, and social-democrats try to form a grand coalition to beat back the barbarians. Anything seems better than the fascists, so they join together, sometimes in political coalition, sometimes in spirit. But what should send a powerful message of unity to the people all too often falls flat. For fascism is also a reaction to the corruption of liberals and the ineffectiveness of social-democrats, thereby making the coalition appear both corrupt and ineffective. It is much the same sort of reaction we are now seeing to the Democratic Party’s choice of Clinton. She is just centrist enough to win over a few Republicans, not progressive enough to win the Left.

As the center wobbles, the fascists pick up steam. Hitler and Mussolini built disciplined ideological movements with a vision of the future and a sense of destiny. Fortunately for America, the movement to elect Trump is possessed of neither vision nor discipline. And this may well explain why support for him has stalled.

Perhaps it is the role of the Left in bringing fascist movements to power that is most worrying. Twentieth-century fascist movements were often formed in opposition to the communist Left. But Leftists tend to desert the liberal-social-democratic-center for its compromises and corruption. For fascism tends to arrive on the scene at a time of national displacement. As Eric Hoffer, the philosopher and longshoreman notes, people join mass movements when they feel isolated and marginalized, when they feel hopeless and displaced. And the same forces that drive people to fascism also drive them to movements like communism as well.

If the Left is strong enough to pull away substantial portions of the social-democratic center, or if the liberal-center is too weak or corrupt to justify its stand against the fascists, the grand coalition falls and the fascists take power. So, while the Left may share, with so many others, the same repulsion toward fascism, they can also serve as a sort of wrecking ball, smashing the last lines of social defense.

When fascists attain power, conservatives quickly discover they were willing to say whatever they needed in order to rule. But seldom do they withdraw support, becoming like the King to Mussolini, a sort of mild restraint, riding a bucking bronco through the streets of history. Yet, no one is in control of fascist movements, least of all the fascists, who are driven by impulses beyond their control. But after thoroughly smashing their nation’s political norms and institutions for a generation or so, the fascists tend fall from power. At least this is the way it has been.

Neither Trump nor Putin is a traditional fascist. Putin is too measured, Trump too bombastic. Putin was a quiet successor of a democratically elected leader, Trump a billionaire reality-TV star. But if Trump most fits the bill in his disdain for social and political norms and in his open bigotry and threat of extra-legal violence, Putin does so in his disciplined destruction of democratic institutions, in his steady imperialistic ambitions, in his machismo and threat of nuclear war.

Their pact reminds me of the Hitler-Stalin Pact, which lasted until Hitler invaded Russia. It was the last thing Stalin imagined; some say Hitler was the only person he trusted. The invasion was actually the highlight of the Second World War in terms of death and destruction. But if all goes well, Trump’s polling numbers will continue falling. Still, the movement Trump created will no doubt find other leaders and Trump may return from the grave. It takes time to build a fascist movement that takes power, after all. One senses this is the kind of horror story that is only just beginning.
~