Can Love really Save us when Everything Falls Apart? 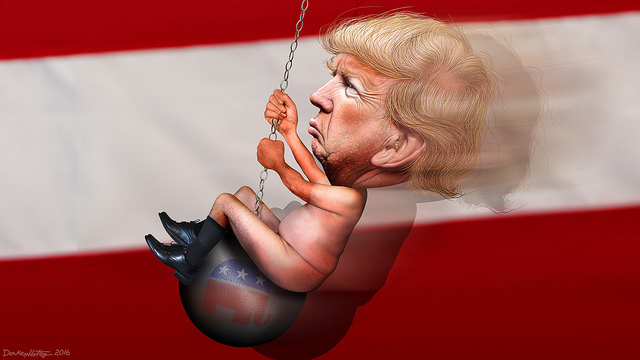 What role will love play in the path ahead?

If you lean left on the political spectrum then you, like me, were probably shocked by the outcome of the election. I walked around befuddled for a few days following Donald Trump’s stunning upset of Hillary Clinton. Then I started to come out of the fog. I started to ask myself, “Where do we go from here?”

We are a deeply divided nation. In the past, this division fell along ideological lines. We more or less agreed on a diagnosis of the problem but disagreed on the path forward. Republicans argued for individual rights and less government, democrats argued for a stronger federal government in order to ensure that individual rights were granted to all Americans. I know many of these partisan fault lines still exist, but now the division feels more fundamental.

We are no longer arguing over solutions: we are arguing about the problems themselves.

We are not arguing over how evolution should be taught in schools but whether evolution is real or just a theory.

I hope that the deep divides that have poisoned our politics begin to recede, but I’m doubtful. It’s hard to imagine the country coming together when it appears that we live in two different Americas—when each side appears to see two different realities.

I don’t want to gloss over this divide with love. I don’t know if love will bring us together—maybe it will, I’m just not certain. After all, one of the slogans in the 2016 campaign was “Love Trumps Hate.” And at least in the short term, it doesn’t feel like love trumped hate.

So I don’t want to pour a big ole’ bucket of sentimental goop on the problems before us. They are real problems and we really are a deeply divided nation.

After the fog of the election cleared, I got to thinking about the role love would play in the healing ahead. I was reminded of a passage from the upcoming book, Finding God in the Body. The passage I’m talking about is in chapter 13, The Freedom to Love. This passage is close to my heart and for this reason it began to chip away at my cynicism:

“On the spiritual path, we will fall short many times. It is easy to become impatient, frustrated, and overwhelmed. That is why love is so important. Love sees life in everything. It recognizes the life that abides within every creature. This recognition begets respect. Love is patient, kind, and endures all things, as anyone who has attended a wedding knows. Our knowledge, plans, and strategies will reach their wit’s end, but love never tires.

“One day, while watching my favorite television show, The Office, I heard those famous words of St. Paul’s yet again[1] but this time with new ears because I was holding my newborn son. As I looked at him and heard, “And now these three remain: faith, hope and love. But the greatest of these is love,” I understood. For the first time, I understood.

“In that moment, I knew: I knew that I could read every book in the world and make plans from now until the end of time, but my knowledge would be exhausted and my plans would fall short. No strategy and no amount of preparation could ever get me to the finish line. The only thing that remained was love. Only my love for him can bear the hardships and difficulties that our relationship will bring to the surface. Only my love for him can overcome my impatience and arrogance. Only my love for him can guide him without trying to bend him to my will. Only love is humble enough to teach him how to think without teaching him what to think. For only the eye of love sees him as his own person and only love is selfless enough to grant him the space he needs to grow into that person. Love is the only voice within me honest enough to admit that he does not belong to me.”

While I don’t know if love will bring us together, I do know that love will enable us to see the humanity in one another. It will enable us to be honest with each other, speak directly to one another, and do so in a respectful tone. Love does not only enable us to respect our fellow man, it demands that we talk to each other, not at each other. Love encourages us to embrace our enemies and be uncomfortably honest with our friends. So I do believe that love creates an atmosphere where productive dialog can take place—and honest, intelligent dialog is definitely something that is missing in our political discourse.

Solving the problems that are on our collective plate will be taxing. It will be exhausting. Love will enable us to endure. Only love—love of country; love for our fellow man, our children, and the planet we inhabit—will be able us to endure the long, gruelling path ahead. Because love is what binds our actions to the truth in our heart.

I’m not a sentimental person. I am analytical by nature. I’m not trying to paint a rainbow over the very real problems we as a nation must face. I just don’t think we can address those problems in an effective way given the divisive and resentful climate that currently exists. And I do believe that love and love alone is capable of dealing with that problem. So, over the coming weeks and months there will be plenty of in-depth discussion about the issues. But for now it is probably best to meditate on the role that love will play in the process of healing.