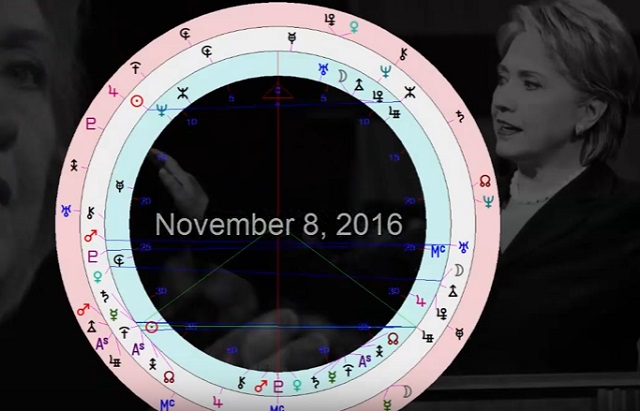 *Editor’s note: Astrology isn’t a religion. We’re not sure it’s a science, either. It’s magic, maybe. But, as with feng shui, say, things affect things. So as long as we don’t go blaming our problems on the stars, as long as we assume responsibility for our own actions…well, hell, a little auspicious coincidence and applicable wisdom can’t hurt. And so, with that grain of salt…enjoy!

Today, on November 8, 2016, all (or most) Americans are going to the polls to vote for the next President of the United States.

This has been a highly contentious election season that has polarized our country. Polls are reflecting a tight race, but as an astrologer I have been predicting—since May of this year—that Hillary Clinton would become our next President.

Astrologers have many ways of looking at a candidate’s birth chart and forecasting the likelihood that a candidate will win or lose an election. To predict the outcome of this presidential race, I focused on the transits affecting each candidate.

Transits are astrological events that are produced when a moving planet in the sky forms a relationship with a planet in a person’s birth chart. The interaction of those two planets produces an event that causes something to happen in a person’s life.

These transits are the catalyst or change agents that affect a person, their relationships, activities and the major events that occur in their life. A transit’s effects can be positive, beneficial, negative, upsetting, difficult, disappointing and even depressing. As an astrologer, I have interpreted the transits of each presidential candidate and determined who will be the next President of the United States.

My personal political views have never altered my objectivity in interpreting the transits (and progressions) for each candidate as their astrology dictated. The stars don’t lie even if we astrologers are prone to our own misinterpretations.

Astrologically, I believe Donald Trump will lose and why Hillary Clinton will win this presidential election today.

Prediction: After the election is over—look for Trump to star in his own TV Show and/or start a TV network and make millions.

This transit is the only positive astrology Trump has at the time of the election. I believe it is also about him being liberated from the burdens of a campaign and the daily upsets from the public/media and breathing a sigh of relief from being a “loser.” He may look forward to the excitement of leading his 50 million followers in support of his new TV enterprise.

There is so much positive going on in her chart around November 8th, Election Day, that I’ll just summarize the aspects happening at that time.

The Clue: Where will Hillary live?

To predict who will win the Presidency, it is interesting to look at the 4th House of each candidate’s birth chart. This house rules one’s home or residence. If either becomes President, it is likely that their birth chart would show them making a move to a new residence. As I look at the transits affecting Trump’s 4th House, I see no indication of him moving anywhere.

But with Hillary’s 4th House being ruled by Neptune, I see that she has a very positive, transiting Jupiter conjunct Neptune happening right around election day. This transit tells me that this is a time in her life when her ideals are aroused and she will have the opportunity to fulfill her most deep-seated dreams. She will be concerned with transforming the social order and helping those in need. It is a time when she will have an opportunity that inspires her

With Neptune ruling Hillary’s 4th House, it is also a time when I see her moving into a special home that fits her ideal. I believe this is another “tell” because this transit is indicative of it being a “lucky” time for her, when she’s won the Presidential Election, and has the opportunity to move into her “dream house,”—the White House.

Prediction: Based on looking at each candidate’s astrology, I predict that Hillary Clinton will become the 45th President of the United States.

Whether you voted for Hillary or Trump, if you want to find out how your transits may be bringing changes to your life, go to the Free Transit Calculator and enter your birth date. (Make sure to scroll down to the end of the page.)

If you want to know about the planets in your personal horoscope, go to the Free Horoscope Calculator and enter your birth date. If you’re curious to learn what your Horoscope says about your love relationships, and marriage prospects, as well as career, investments and health, order your customized personal report.