Is Trump a High Chair Tyrant? 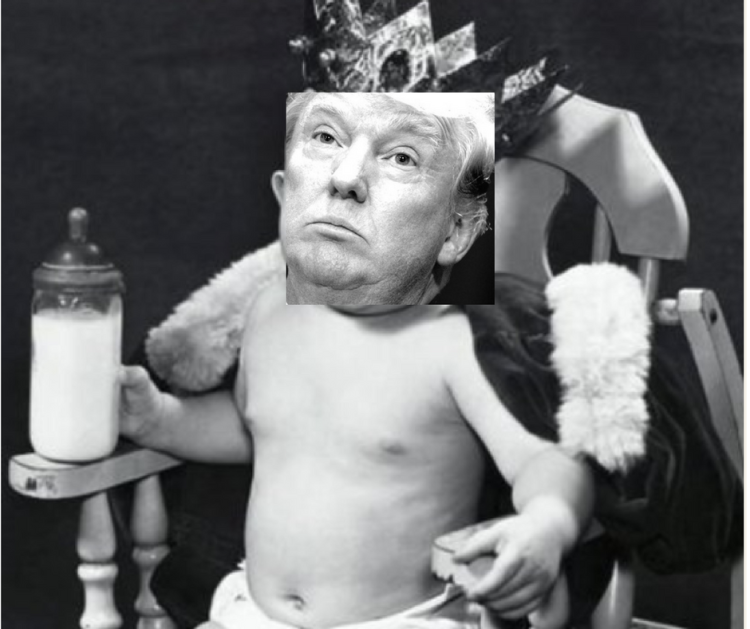 The consensus among an increasingly alarmed populace of the world’s sane is that presidential candidate Donald Trump displays the attributes of a tyrant—you know, like Hitler, Hussein or Trump’s new bestie, Vladimir Putin.

But a closer inspection of The Donald’s actions reveal something even more alarming than a simple authoritarian-bully. If you really dissect Trump’s comments and behaviors what emerges is the Jungian archetype of the “High Chair Tyrant.”

Before I explain what that means, a Jungian primer here. There are four aspects of mature masculinity: The King, The Magician, The Lover and The Warrior. But before these ripen into manhood there are three archetypes of boyhood called The Divine Child, The Weakling Prince and The High Chair Tyrant.

A common lament among Jungian analyst-writers is that men in the West have gotten stuck in boyhood archetypes that fail to mature into their healthy masculine counterparts. (Apparently the West has been derelict in initiation rites that usher boys into manhood for one, along with a dearth of positive masculine role models and wise male elders. The culture of the West is tribally adrift and the men—and women—suffer for it.)

In Donald Trump’s case, this manhood adrift is glaringly evident.

Donald acts and speaks like a petulant, spoiled, entitled and blustering boy. And I’ve been haunted for a few months now with one single driving question: How will a tantrum-prone boy rule a nation?

Read this excerpt about the High-Chair Tyrant and tell me that you don’t see Donald in this eerily apt description.

“The High Chair Tyrant needs attention. But unlike the Divine Child, the High Chair Tyrant doesn’t give anything back. He doesn’t inspire–he just demands. And even when his needs are met, the care often doesn’t meet his unreasonable expectations, so he throws a tantrum….The High Chair Tyrant is the embodiment of entitled, arrogant, narcissism. He wants attention, but he doesn’t want to lift a finger to get it. He thinks he deserves it just because

A grown man who is still ruled by the High Chair Tyrant sulks when he doesn’t get his way, fails to take responsibility for his actions, and is incapable of taking criticism. His arrogance can blind him to reality and cause him to stumble. You can see the High Chair Tyrant manifested in celebrities and politicians who believe they are so special that they are not only entitled to indulge in things like infidelity and crookery, but that they won’t get caught either.” (For more on this topic and source of this excerpt click here.)

I’m not the only one noting lately the bizarrely infantile aspects of Trump and the daunting consequences of a child-king elect.

Steve Almond writes about this at Salon, noting,

“If he does make it to the White House, Trump will assume the role of a child king, allowed to dress up for state dinners, issue decrees and ogle the wives of foreign leaders.

The real power within his administration will reside in his court—the unelected advisers who surround him. They are the ones who will do the dirty work of governing. Given the company he has kept on the campaign trail, this prospect should be terrifying to anyone with a functioning frontal lobe.”

So, assuming there haven’t been mass lobotomies, why are some people drawn to support Trump despite clear demonstrations he is a boy playing dress-up in designer business suits with linebacker shoulder pads?

Partly because he comes across with a bullish authoritarianism that appeals to a large segment of the U.S. population who feel lost in some way and who are looking to be found—or at least if not found, then lead in a direction where they feel important and heard.

It doesn’t seem to matter to them that the Pied Piper may lead the world off a nuclear detonation cliff because of a temper tantrum or a bout of narcissistic self-importance.

When I wrote about the shadow aspects of Donald Trump in March (Less Luminious Beings, Awakening and the Dark Side of American Politics) I did so because I could sense his rise to power was inevitable—even when back then, he was still only a contender for the Republican nomination.

My focus however was on looking past the surface to the subtext of what Trump stands for.

“The real story is the glaringly obvious dynamic of extreme polarity. Not just the polarization of left and right politics, but a grand-canyon sized gap between the light and the dark in the soul of humanity. The United States, it seems, has become the global stage for this schizophrenic soul drama, where sentiments based on hate, fear and anger have gained mass appeal across a wide spectrum of right-wing American voters.”

This extreme polarity is not just about a seemingly off-the-rails U.S. election. This schizophrenic split shows up “out there” because in some way that we are failing as a collective to acknowledge, that split is within the collective human psyche itself.

And to be clear this post is not necessarily an endorsement for Hillary Clinton, who probably has her own Shadow Queen archetype. I am writing about Donald Trump because his psycho-pathology seems glaringly obvious when framed as stunted development into a healthy manhood/kingship.

In the meantime I’m going to meditate on the eerily political-landscape prophecy of soulful Leonard Cohen’s You Want It Darker. It’s a great song to listen to over and over again while you ponder the meaning of Trump and the fate of the civilized world.

They’re lining up the prisoners
And the guards are taking aim
I struggled with some demons
They were middle class and tame
I didn’t know I had permission to murder and to maim
You want it darker.”