Any way you cut it, the Electoral College should Reject Trump. 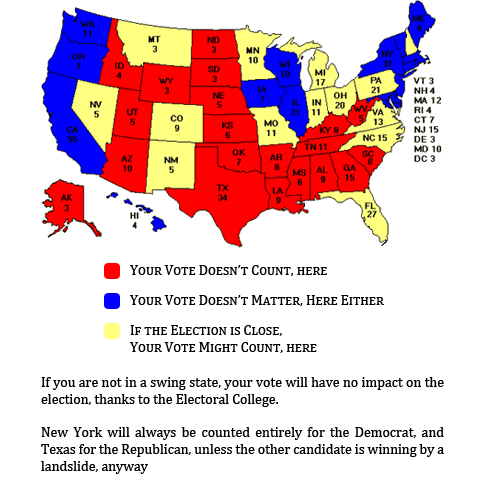 If you believe the Electoral College is a necessary check on democratic passions, as the founders believed, then you should press them to deny Trump the Presidency.

Donald J. Trump is precisely the kind of dangerous demagogue the Electoral College was designed to keep out of office.

But if you believe the Electoral College is an undemocratic institution designed to thwart the will of the people, then you should also press them to deny Trump the Presidency, for Donald Trump lost the popular vote by more than any winning candidate in history.

Any way you cut it, the Electoral College should feel empowered to deny Trump the Presidency if its members believe it is the right thing to do—and they should.

The Electoral College is an unusual institution, which grants the presidency, not to the winner of the popular vote, but it goes to the candidate who won the most electoral votes. Electoral votes are won by winning states, with the winning candidate of each state getting all of its electoral votes.

Parties are careful to choose loyal electors in order to assure victory, but the founders reasoned even loyal electors might break their pledge in the national interest. Schooled in Ancient Greek history and philosophy, where the passions of the people were seen as a threat to democracy, the founders reasoned the Electoral College would be a check on dangerous demagogues and the passions of crowds.

There is another function of the college as well. States are granted an elector for each of their two Senators and each of their Congressional Representatives. Since several rural states with tiny populations are awarded the same two Senators as massive states like California, the Electoral College, like the Senate, protects smaller states from being dominated by bigger states. The founders were concerned with protecting the distinctiveness of states, because America at the time was a compact among states.

But now we are left with an electoral system in which voters from small rural states have more voting power than their fellow citizens in bigger, more urbanized states. And since rural populations disproportionately vote Republican, the Electoral College, like the Senate, disproportionately favors the Republican Party. What this means is that, to the disadvantage of one major block of voters, presidential elections are not based on the principle of one-person, one-vote.

Altogether, there are 538 electors—and in spite of the fact that Clinton holds a 1.9 percent, or 2.5 million vote, lead over Trump in the popular vote, Trump holds a 306 to 232 vote lead in the Electoral College. Already a group of Democratic electors has formed a non-profit and is mounting a campaign to convince Republican electors to reject Trump in favor of a consensus candidate like Mitt Romney or John Kasich. No matter how you view it, remaining true to the purpose of the college or rejecting its undemocratic nature, electors can reject Trump on firm principled grounds.

But there are bigger worries we should press upon electors in the national debate. Perhaps the biggest is Trump’s collusion with Putin to subvert American democracy. Early this summer, Trump expressed the hope that Russia would hack Clinton’s e-mails, and when they were hacked later in the election season, the office of Homeland Security and the Director of National Intelligence, representing nineteen different intelligence agencies, concluded they were “confident that the Russian government directed the recent compromises of emails.” Moreover, 13 different intelligence agencies concluded Russian hackers tried to tamper with American electoral equipment.

While it is unclear whether there was any direct collusion, Trump literally invited a foreign government many would consider an enemy to illegally interfere in the election, and this can be considered a sort of treason in itself. But the interference went far beyond hacking e-mails and electoral systems.

According to two teams of independent researchers, Russia also launched a massive wave of fake news stories concerning their content. These stories were propagated by a network of 200 Russian news sites with a combined American audience of 15 million people, according to PropOrNot’s monitoring, who estimate the stories were viewed 213 million times.

Not only is Trump the beneficiary of a foreign government’s effort to subvert American democracy, he may not have won without it. And this makes of him a sort of Manchurian Candidate, beholden to a foreign government for his status as president, whom he can help interfere time and time again in order to retain power. This makes him a highly unreliable protector of American democratic institutions.

The Chief Ethics Counsels for both President Obama and Bush are concerned with other conflicts of interest, arguing the Electoral College should reject Trump if he does not sell his businesses and put the proceeds in a blind trust, for the Constitution prohibits the president from receiving payments from a foreign government, but his businesses currently receive a stream of such payments. Chief Ethics Counsel for Obama, Norman Eisen, suggests we are facing a “wholesale oligarchic kleptocracy of a kind that we have never seen before in our history.”

Trump has already asked a group of British politicians to stop the development of a wind farm that would mar the views of a golf course he owns in Scotland. And his daughter, Ivanka, who runs his day-to-day business affairs is already sitting in on meetings with heads-of-state. If this is what he is doing before the electoral college has even ratified his election, we should assume worse when he takes office.

All of this should concern the electors. All of this should provide ample reason for rejecting Trump, and all of it should make opponents of Trump comfortable that they stand on firm constitutional and principled grounds for pressing electors to vote for Clinton instead.