Seven Quotes from Ernest Hemingway to Teach us how to Live. 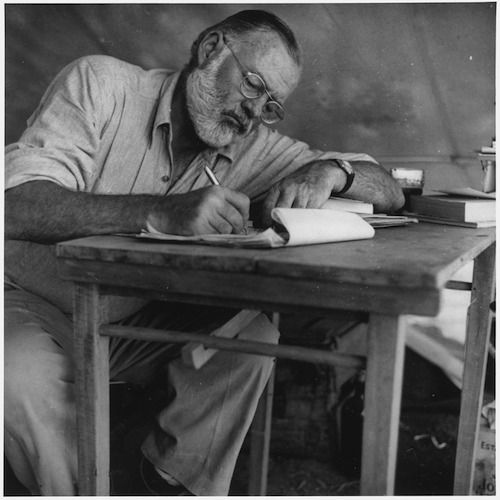 I am moved when I read a great book or watch a good movie.

I get motivated when I listen to speakers like Tony Robbins and people who have compelling stories. However, I am most inspired to take action and change my life by studying people who have lived their lives fully, awakening to their aliveness.

Ernest Hemingway was such a man.

He was a great writer, but much more. He provided us with many life lessons—not only in his writing and quotes, but also through the way he lived. Love him or hate him, he was always in action and living life to its fullest.

Here are seven of his most striking (and instructive) quotes:

1) “Every man’s life ends the same way. It’s only the details of how he lived and how he dies that distinguish one man from another.” ~ Ernest Hemingway

We are all born, and we all die.

We share this with every single human being, but how we live our lives makes us unique, setting us apart from one another. Hemingway is still talked about today, known to both young and old. James Joyce was arguably a better writer, but can anyone who is not a true reader or writer claim to know of him? Hemingway was larger than life. He was often self-centered and, in his later years, more drunk than sober, but that’s not the point. He made adventure and curiosity something worth following.

He was fearless in his pursuit of his passions. Whether he was fishing off the Cuban coast, big game hunting in Kenya or setting up home in Cuba, he always followed his heart to the end. He was brave and stood for his beliefs. He went into the First World War at the age of 18 and won the Italian silver medal for bravery. He went as a jouranlist to cover the Spanish civil war in 1937 because of his beliefs against the Fascist regime.

Perhaps he failed more than he succeeded, but the bottom line is, he played life as if he were always all in, wanting to fill it with many rich experiences. He understood the basic principle of life: we are here to experience the physical realm.

2) “The first draft of anything is sh*t.” ~ Ernest Hemingway

In reality, our first attempt at anything—be it writing, a business venture or a job interview—is usually mediocre at best. We need to understand that the first step is always about showing up and putting ourselves out there. There is nothing called perfection. Many of us hide behind perfection because we are too afraid of being criticized or afraid of not being enough.

When we accept that our first attempt is sh*t, then we appreciate that we must practice, learning from our mistakes, taking feedback from our trusted helpers and finding the courage to edit our work and put it out there again, so that we keep polishing our work until it’s the finished product.

3) “The world breaks everyone, and afterward, some are strong at the broken places.” ~ Ernest Hemingway

Pain and discomfort lead us to change, growth and ultimately more meaning. It’s the pain that pushes us out of our comfort zone so that we can venture out and try new experiences or methods we dared not try before.

We need to understand that pain, setbacks and sadness are inevitable in our lives, and we need to be realistic enough to accept them as part of our journey. When we understand that, pain becomes a great teacher to learn from—rather than something to simply endure.

4) “The best way to find out if you can trust somebody is to trust them.” ~ Ernest Hemingway

Trust is difficult. The more you sit down and analyze how to trust someone or something, the more reasons we will find for not trusting them. How many opportunities have we lost due to not trusting our inner voice? How many friendships have we discarded because we didn’t allow ourselves to trust them. Why? Because we were too afraid to trust.

To allow ourselves to trust and surrender to life is not easy, but it’s liberating. At the end of our lives, we will definitely be more affected by missed opportunities and regrets than by the pain and learning that comes from trusting—and getting hurt by that trust.

In the age of the fast and furious, where we communicate constantly through social media and are always keeping up with the Joneses, there is no end to comparing ourselves with others. We compare our homes, cars and jobs. We even compare our dreams with others. Bucket lists have become a thing we must all have, but sadly, they all resemble each other—a marathon, a mountain peak, vagabonding in Southeast Asia.

We hardly ever stop, taking the time to check on the progress that we’ve made. We rarely compare ourselves with who we were six months, a year or five years ago. Yet, the reality is that we live for ourselves, and the only way to gauge our improvement is to compare our lives and achievements with who we were before.

We have a primal need to connect with our fellow human beings. We do that best when we feel seen, heard and valued. Great conversations occur when the speaker and listener enter a conversation as equals. They drop their shields, silence their judgmental inner voices and allow themselves to become vulnerable in discussing issues that include both heart-bursting joys and hard, painful truths.

When we listen fully, we are not only hearing words, but also receiving something far more intangible. It’s like we are exchanging parts of ourselves—inner pieces that have been hidden away in the dark abyss of our subconscious minds.Talking and listening collapse into one form. We are on the same wavelength. We have become one, if only for those few moments.

Just because we’re moving around and being busy doesn’t mean we are making progress. We are affected by the society around us and we think we are actually taking action, when really we’re merely going through the motions of doing something useful. We often mock dogs for chasing their tails, but it’s what many of us do most of the time.

Are we doing what we really want?

Have we defined what it truly means to be in action in our lives?

It takes a lot of effort to have a following as a blogger, from using social media to maintaining interaction with readers. However, when we spend more time doing that than working on the crafts of writing itself, we confuse movement with action. We must focus our priority and actions toward improving our writing and consistently putting out the work.

Ernest Hemingway has many wonderful stories and I am surprised when I hear one of his quotes I’ve never heard before. I would love it if others would share a swashbuckling story or two about his life that I have forgotten or never heard. Leave your stories in the comments.