Happy Chinese New Year: Celebrating the Year of the Pig. 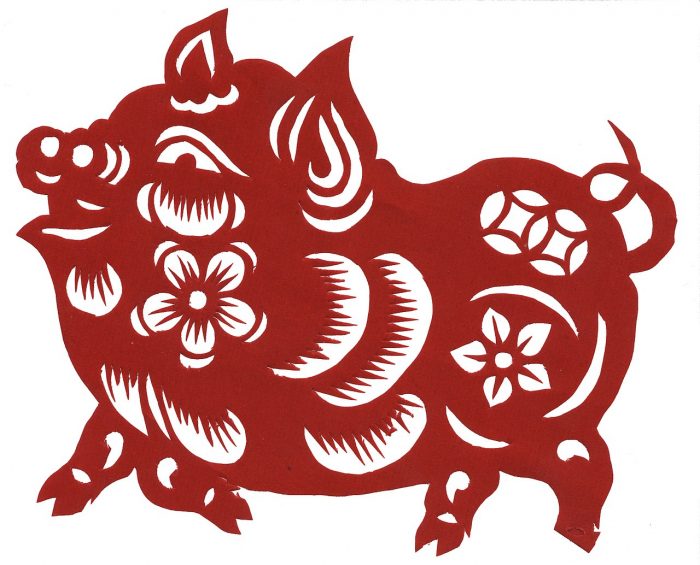 The Chinese New Year is characterized by one of the 12 animals featured in the Chinese zodiac, and 2019 is the year of the Pig, the 12th animal in the cycle.

The Chinese New Year, also known as the Chinese Spring Festival, is based on the lunar Chinese calendar, which is determined by the date of the first new moon of the year.

The Chinese New Year, which is celebrated for 15 days, is the most significant of all Chinese festivals and holidays.

There are many ways to join the festivities and pay homage to Chinese myths and traditions.

Here are a few of the most common ways to honor the Chinese New Year.

On the Chinese New Year, it is important for families to spend quality time together. Many Chinese families hold a New Year’s Eve dinner—typically at home—also known as a reunion dinner. This meal brings together those who live away from home, and it is their most important meal of the year. Often several generations of the same family gather to enjoy food and time together.

Jiǔ, which is the Chinese word for alcohol, is often served at dinners, as it has the same pronunciation as the words forever and longevity.

People serve chinese noodles, left long and uncut, as a symbol of longevity.

Spring rolls are another dish that is commonly served, because they are named after the Spring Festival.

Rice balls signify togetherness and are believed to bring harmony.

Chinese dumplings are popular as their shape is similar to Yuanbao, which were ancient silver or gold ingots. They represent money, prosperity and wealth.

It is not recommended to eat chicken this year, because it will be offensive to the Rooster, whose year it is.

In China, every family has their own Kitchen God who acts as a guardian over the family. The Kitchen God is said to go to heaven to report to the Jade Emperor about the family just before the new year. To appease him, it is traditional to offer the Kitchen God a sacrifice of fruit, candy or water and possibly even burn a picture of the Kitchen God so that it can be sent to heaven as smoke. This is believed to be a way of bribing the deity so it will only report good things about the household.

It is advisable to interact positively with others during the Chinese New Year, as this is a time to celebrate good fortune and spread happiness and goodwill. Arguments or negative moods are believed to bring bad luck to the new year.

It is also tradition to honor your ancestors and show gratitude and respect for all they have done for you. People often create alters or shrines with dedications to them along with a sacrifice of food or water.

Shou Sui is one of the most practiced customs in China on New Year’s Eve and the term means “after New Year’s Eve dinner.” It is the period of time when family members stay awake reminiscing about the past while waiting to watch the midnight fireworks. Many stay up throughout the night because they believe it enhances good health and increases longevity for their parents.

According to mythology, there was a wild beast named Nein which means “year.” He appears on New Year’s Eve to harm people, animals and property. When people found out that Nein was afraid of the color red, fire and loud sounds, the Chinese people stayed awake during the night and used these things to keep him away.

Immediately after midnight on New Year’s Eve, fireworks are launched to celebrate the coming of the new rear and to drive away evil. It is believed that the first person to light the first firework of the new year will receive good luck.

Firecrackers, (which are mostly lit on the ground and are illegal in many places around the world) are set off at midnight to welcome in the new year. The loud noise from the fireworks wards off bad spirits that are thought to bring bad luck. Many continue setting off fireworks for the first 15 days of the new year.

Some Chinese people do not wash their hair during the three days following New Year’s Day, as they believe it will wash away any acquired good luck.

It is traditional to avoid a hair cut for the first month of the new year as it may bring bad luck to their uncles. Therefore, many get a last minute haircut on New Year’s Eve. This tradition stems from the Qing Dynasty when the Han Chinese were forced to shave the front of their heads.

It is believed that completely cleaning every corner of the house a few days before the Chinese New Year cleanses the old, removes any bad luck that has accumulated, welcomes the new and invites good luck.

But once the new year has started is not advisable to clean the home for at least the first few days of the year, as it will sweep away any good luck that has entered. Many keep this tradition going for the entire 15 days, or for as long as they can refrain from cleaning.

It is traditional to decorate the home to welcome the New Year. Red is the most common color used for decorations as it is a symbol of good luck. People hang paper lanterns and put images of gods on their front door to bless the house.

Many people paste paper cutouts on to south or north facing windows, depicting the pig or scenes from Chinese mythology. People are also known to paint or decorate their door, doorframe or windowpanes red for added luck.

People paste couplets, (Chinese calligraphy in black ink on red paper) with good wishes, usually about the arrival of spring, onto their doors and windows, in pairs, for good luck.

As 2019 is the Year of Pig, people will place decorations related to the pig in places where celebrations are taking place.

People will place flowers, such as lotuses, which symbolize rebirth and growth, around the house along with bowls of fruit, particularly mandarin oranges, as these are the fruit of happiness. It is important to use even numbers and to eat in pairs to continue the theme of attracting good luck.

A red envelope, also known as hong pao in Mandarin, is a common gift, containing money (often eight coins for the children to play with.) These envelopes are usually given to young children and unmarried adults who aren’t working. Married couples also give a red envelope with money, to their parents. The money is thought to suppress evil and ensure children’s happiness, health, and longevity.

The total amount of money given must add to an even number and consist of new bills. The number four is considered bad luck, so it is not advised for the total to add to an amount without four in it.

Chinese people are generous during this festival and generally purchase brand new clothes to celebrate a fresh new start.

Red underwear, usually embroidered in gold, is also a popular gift during the New Year and throughout the year for anyone born in the year of the pig. Although any item with the color red in it is thought to bring in positive energy it is believed to be the most lucky when the item is given as a gift.

People are discouraged from wearing too much black during the New Year celebrations, as it is a symbol of mourning and bad luck.

Many Chinese people visit a temple during the New Year celebration period to pray for good fortune. It is common to burn incense sticks and have their fortune told.

The 15th day (Yuan Xiao Jie) marks the end of the Chinese New Year celebrations and occurs on the first full moon—it is known as The Festival of Lanterns. Lanterns are lit in the streets of cities to celebrate. It is a family celebration—poetry or puzzles and riddles for children to practice problem-solving skills are written on the lanterns.

Dancing dragon performances take place on the 15th day, as the dragon is a symbol of strength, courage, wisdom, luck, fortune and prosperity.

Sweet dumplings, made with a variety of sweet fillings are called tangyuan, are a popular appetizer during the Festival of Lanterns. Common fillings are coins for wealth, candy for sweetness in life, peanuts for health or chestnuts for vigor.

People light candles in the home to draw in positive spirits.

People put away knives, scissors or any sharp objects during the celebrations, as they are believed to cut away good fortune.

Dragons are popular during Chinese New Year parades, as the dragon is revered in China. Many people believe themselves to be descendants of the mythical creature.

Search online to find out if there is a parade or celebration in your area. San Francisco has the largest annual Chinese New Year parade outside of Asia.

If you aren’t going anywhere to celebrate, Chinese New Year parades are broadcast on television or online during the festival. In China the annual midnight Spring Festival Gala on CCTV is the world’s most watched television show, which attracts over 700 millions of viewers.

Wishing you all happiness in the Chinese New Year.