Refugees can Teach Us the Meaning of Freedom. 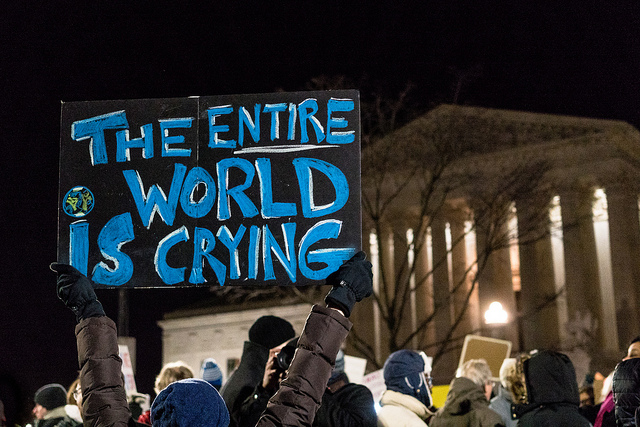 Author’s Note: The Muslim ban will kill real people who love our culture and only want to live safe and secure lives. These people are my friends and my family, who were once in their shoes.

Almost half of my family fled from the Iranian Revolution in 1979. Without the generous welcome granted by America and other Western countries, many might have died. The Iranian side of my family is Jewish, but they were targeted by the populist uprising with other Iranian elites. And the Muslim Iranians who came to America have since that time become perhaps the most prosperous ethnic minority in the country.

It was not the first time my family fled from a dangerous regime. My grandfather first became a refugee from Iraq in World War I to escape conscription in the Ottoman army. The empire was falling to pieces at the time, and a nationalist uprising was committing genocide against its Armenians and ethnically cleansing its Greeks in an effort to create an ethnically pure heartland in the Anatolian Peninsula. Living on the outer margins of what would soon become Turkey, and part of a small ethnic minority, my grandfather would likely have been cannon fodder without the opportunity to immigrate to Iran.

Generations later, I would travel to the region to write about another genocide just getting started. A little known jihadist group had trapped up to 40,000 Yezidis, a tiny religious minority, on a small mountain range in northern Iraq, threatening to kill them if they did not convert to Islam. They were starving and dying of thirst and showing up in droves on the border between Iraq and Turkey, where I befriended several and wrote of their plight. All of them loved America and wanted to immigrate there so they could live freely and safely.

President Obama quickly sent in American airlifts, supported on the ground by a communist Kurdish militia that had up to that time been listed as a terrorist organization. Thus began the fight against the Islamic State. It may have been the first time in the modern era that a genocide was stopped cold by a humanitarian intervention just as it was getting started. But it was a war that would be fought less with weapons and more with the imagery and emotion of American tolerance.

There are many who would dismiss these horrors as par for the course when dealing with a so-called barbaric religion of violence like Islam. And yet, it was the Europeans who dragged the Ottomans into WWI, invented trench warfare and mowed each other down in the Battle of the Somme, killed off the bulk of Jews in WWII, took over the greater part of the world to rob it of its riches, and ultimately destabilized the Middle East for generations through its imperialism and support for secular dictators, all in the name of oil.

Moreover, the God of the Muslims is the same God of the Christians and Jews—and the prophets of Judaism make up the vast bulk of Muslim prophets. Islam is the last of the three Abrahamic faiths and the only one of the three that explicitly not only recognizes and respects, but also integrates the others. And the spirit of its scriptures is alive and well among its adherents, who have repeatedly demonstrated to me a vastly greater respect for my own religious beliefs than most Christians and Jews. It is one of the sad ironies fostered by an astonishingly ignorant media that the most religiously tolerant of the three faiths has come to appear the most intolerant.

But the Middle East is a troubled part of the world, and it is bleeding refugees. My partner and I have interviewed and befriended many of them in Turkey, Lebanon and Greece. And what we have continually found is bright and resilient individuals, who love their families and cherish their freedom, who want democracy and a better life. They are escaping unimaginable horrors, and simply want to be given a chance to work and integrate into free societies where they can live safely and securely.

The Muslim ban is grounded in an ignorance of their religion, fostered by prejudice against their cultures. It is the latest weapon in a war against their humanity, a contradiction of America’s highest values, and an contravention of our Constitution. It is also an inspiration to terrorists everywhere who have welcomed its enactment. The ban tells Muslims that they have no place in our society; that we are an inhumane people who cannot see their pain; that our tolerance is a façade, our riches skin deep, our institutions made for breaking.

The ban will tear apart families, subvert life trajectories, stop dreams short and send countless individuals to their graves. These people are my friends and they might just as well have been my family. They often love our culture more than liberals and conservatives combined, because they know what true freedom means to the good life. They know that without the freedom to speak their minds they cannot form their thoughts and thus think for themselves—and that without the ability to organize with others for a better life, they are cursed to be bullied and exploited by leaders who care nothing for their fate.

The greatest irony of the ban is that it will foster the belief that freedom is an illusion, that tolerance is a privilege and that politicians everywhere care only for their own petty selves. Donald Trump’s inflated ego will stand as a symbol to them of every shattered dream and broken illusion they once associated with America. And the American dream will come to appear a little more like the nightmare of plutocratic populism.

Perhaps the saddest is irony is that while the ban is being done in the name of making America great again, it is saying to the world that America is ready to hate again—just like we did with the Irish and Italians, the Germans and the Jews, the Puerto Ricans and the Cubans. Contrary to popular myth, Americans have long closed their hearts to refugees from famine and hardship, war and genocide. But while we have often given the cold shoulder to refugees, we have, over time, learned to tolerate their differences—and in tolerating their differences learned to appreciate their uniqueness, and through appreciating their diversity integrated them in our great experiment in multicultural democracy.

Syrians and Libyans, Iraqis and Iranians all deserve this same chance at freedom, especially when the alternative is so often death.