What I Ask Myself after Every Date. 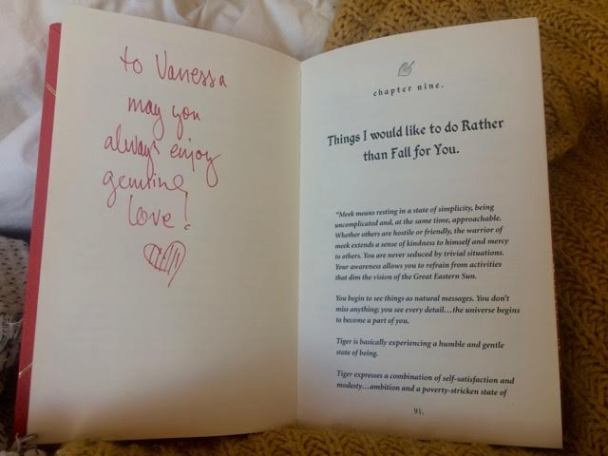 I attended Waylon Lewis’ first public reading of Things I Would Like to Do with You at the Boulder Bookstore.

I had read the book twice, had given it as a gift and was overwhelmed with joy to be listening to the author speak the words that had consumed my mind and comforted my heart over the past few weeks. (You can even see me wildly smiling in the above linked video at 17:18 and 52:04. I was obviously elated, to say the least).

After the reading, I waited in line to have Waylon sign my copy. I felt incredibly awkward, for I lived in Boulder and had often seen Waylon at coffee shops and riding his bike around and he felt like just another “Boulderite” to me before I knew he was the founder of elephant journal.

Now here he was, the author of one of my all-time favorite books and I didn’t know how to act.

So, I just smiled. As I made it to the front of the line, all awkwardness waned and my smile was returned with an even bigger one from Waylon. After a few words were exchanged, I asked Waylon to sign on page 90, adjacent to my favorite quote:

“Meek means resting in a state of simplicity, being uncomplicated and, at the same time, approachable. Whether others are hostile or friendly, the warrior of meek extends a sense of kindness to himself and mercy to others. You are never seduced by trivial situations. Your awareness allows you to refrain from activities that dim the vision of the Great Eastern Sun.” ~ Chogyam Trungpa

Waylon wrote, “to Vanessa may you always enjoy genuine love!” He even included a drawing of a little red heart to follow the words.

Unbeknownst to him, he had once again struck a chord with those simple words. I was in the midst of discovering what genuine love meant to me and those words were incredibly empowering at that time.

Now, nearly a year later, I am ready to share my journey with genuine love:

I am 24 years old and have been in love a total of two times.

The first time I fell in love, I was 17 years old and he was 21. It was one of those untainted, fearless, young romances. He was an Army Medevac soldier, set to deploy in a month and I was a young, wide-eyed girl with the world ahead of me. We fell in love in the warmth of the summer heat, kissed by the lake under the stars, caught fireflies in the bushes and woke up early to see the sun rise over the Kansas prairies. Cliché? Oh yes, delightfully so.

As he prepared to leave for Iraq and I was getting ready to depart for university, we decided we would stay with each other, long distance. We wrote hand-written letters, emailed every day, Skyped whenever we could, exchanged a constant stream of laughter, fought, and made-up. He came back and we loved each other deeply and as genuinely as we knew how for two and a half years.

Then, I ended it—after I acquired a serious illness and realized how relatively young and unprepared I was to fall into a forever with him.

My illness made it clear I had not yet truly connected with myself and I certainly had not learned the art of loving myself while being ill. I was exhausted, functioning on empty most of the time, and I knew I needed all of my loving energy for my personal healing at that point.

Alas, my journey as a single woman began.

After gaining my health back, I began dating, a lot. I found meeting new people to be invigorating; that was, until the constant planning, organizing, communication and actually going on the dates started to feel like a part-time job. I realized I was expending a great deal of energy meeting mostly interesting humans from all sorts of backgrounds and professions—travelers, engineers, snowboarders, doctors, filmmakers, entrepreneurs, baristas, artists, physicists, yogis, ecologists, therapists and biologists—who I ultimately was not attracted to on an intimate level. I left most dates happy to be by myself at the end of the evening.

I was at peace with the fact that my dating did not result in relationships or anything serious, for I had never been really looking for a partner, nor was I scared I would not find one. But what came as a shock and what I was not at peace with were the reactions I received when I told my dates I was not interested in pursuing a relationship or going on more dates.

Granted, I did receive a few respectful response of acceptance here and there, but more often, I was told I was not being open-minded enough, I was guarded, I had to deal with my own “dating demons” or I that I would be finding myself in my 30s, alone and regretting my decision to not engage in more relationships.

I would like to report I was a strong-willed woman who did not let these comments trouble me, but that is not what happened.

I was young, relatively inexperienced with dating, and still learning about different sides of myself, which resulted in my taking some of these comments personally. The self-questioning ensued. Was I guarded? Would I end up alone and regretful? Were my reactions to these men based on my own personal insecurities? Why was I even dating in the first place? Did I have a purpose or desire? After having heard these consistent ridicules over time, an overwhelming sense of guilt came over me and I perceived the problem as being me.

I should want this connection, and allot plenty of time and space to allow for a connection to cultivate, right?

This personal questioning made me realize I had healed my body after ending things with my first love, but my mind was still in serious need of introspective reform.

I decided to shut down my dating life until I had answers for myself.

I did my own thing—worked, read, wrote, meditated, did yoga and immersed myself in my own life. I went to Waylon’s book reading. It was glorious and my thought patterns transformed from exploring doubts to exploring curiosities.

After nearly a year without going on a date, I opened my heart to it again. At first, fear of ridicule and pressure resided within me; this was made evident by a teary phone call to my best friend before my first “trial” date in nearly a year. I told her through little sniffles how much I didn’t want to have coffee with this guy. She responded calmly, “Ultimately, Vanessa, it’s just coffee with another human. Nothing more has to come of it.”

She was right and I did it, I went on that date.

And then…I fell completely and unexpectedly in love with a man I asked a question to in a restaurant. It happened fast and it ended quickly, but that connection was there and oh my, it was sweet and delicious. It was whole—I was mentally and physically enticed by this man. I was drawn to his words and thoughts and they lingered in my mind long after we parted ways. We were able to discuss everything without worry of shame or embarrassment, we could disagree agreeably, and we relished in our differences and faults, but our values aligned. Beyond the mental delights involved with this man, I wanted his hand intertwined with mine, I was desirous of him putting his arm around me, I wanted to be seen with him and introduce him to my friends. No fears, hesitations or doubts held me back from being completely immersed in the experience with him. I wanted all of what the moment had to offer and my body, mind and voice were clearly in agreement.

When it ended due to work and proximity challenges, I left feeling grateful for the experience. I left feeling excited about the possibility of finding that sort of connection in the future, with somebody new.

Most importantly, I left feeling free from all the guilt I had accumulated over years of resisting falling into a relationship I wasn’t in love with. This little moment had been so delectably genuine that I now understood exactly why I had demanded space for it in my life throughout all those years.

I have felt the beauty life can offer.

I have felt how sweet it can be to be surrounded by people who make me excited to be alive, how blissful I can feel in the presence of somebody of whom I am completely captivated by. Therefore, I can no longer genuinely feel guilty for not wanting to surround myself with anything less than magical, beautiful love. That doesn’t mean it is free of faults, no. I welcome faults and space and challenges, but in a person I admire, desire, respect and authentically like.

I am now single and adorned with experiences that have taught me something invaluable—to be aware of how someone makes me feel and to ask myself if that is a feeling I am okay with having in my life, long term. If the answer is no, I will respectfully say my farewells. If the answer is yes, let’s see if it’s mutual and then let’s enjoy. 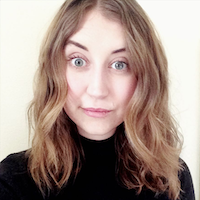