Five Steps that Freed me from Unhappy Stories. 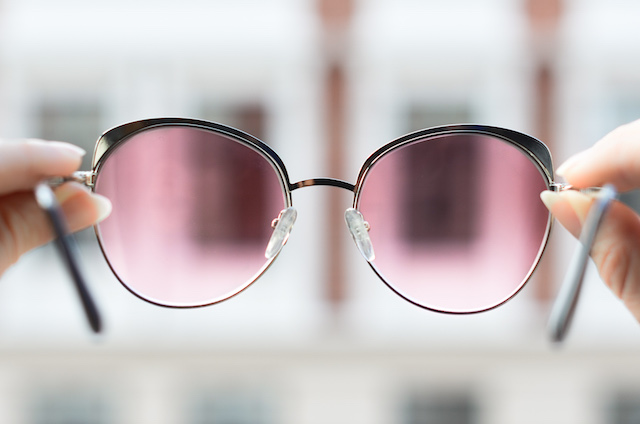 Many of us have been told, at some point in our lives, that we’re looking at life through rose-colored glasses.

When someone says this, they’re really suggesting that since our lenses are rose-tinted, we’re seeing things as nicer than they really are. Rosy perspectives are painted as naive and irresponsible.

I think this is a load of crap that doesn’t help anyone.

In truth, if we’re wearing glasses at all, they’re likely clouded dark, not rosy, by the negative stories we tell ourselves. We all have these stories—narratives that arise from our limited beliefs and less-than-blissful thoughts. Often, the stories running in our heads seem to keep us safe, but they don’t actually bring us helpful perspectives or productive states of mind.

We’d do well to put on the rose-colored glasses for a change, because happy stories aren’t the problem. It’s the unhappy ones we’ve got to keep in check.

Here’s an example of what I mean by an unhappy story:

I have a deep-seated belief that I should be suspicious of love. That is my story, and it seems designed specifically to push people away.

When I was a young girl, people close to me would tell me that I was brilliant, creative, beautiful and talented, that I could do anything I set my mind to. But then in other moments when they felt vulnerable, they would lash out and tell me I was selfish, high-strung and, in essence, a problem.

This experience of hot-and-cold love—supportive and then vicious—stuck with me. It became a pattern of thought and belief. I have subconsciously come to expect it from love.

When I live out my life with this perspective, I believe that anyone who loves me will turn on me. I believe I’m going to be discovered to be a problem, and ultimately rejected and abandoned.

When I get really close to someone, this pattern starts to act up. All of our interactions start to look like evidence that they see me as a problem, and I go in to self-preservation mode. I get defensive. I get offensive. I turn the blame on them in order to show them they are treating me wrong and to level the playing field. And in doing so, I hurt people and push them away.

We often go through life attracting people whose beliefs and patterns correspond perfectly to our own. It’s the reason we keep seeing the same patterns time after time in relationship after relationship. And it’s the reason why each time we think we’ve finally gotten free of a pattern, we experience it with someone new from a brand new angle.

Life is offering us an invitation to pay attention and see that we are the common denominator in all of these experiences. Until we have healed it thoroughly (rather than finding different tactics to avoid it), a pattern will keep attracting its match.

I believe that being paired with corresponding patterns again and again can call our attention to these patterns and provide us the perfect people and circumstances with which to practice breaking free.

However, without consciousness of how we attract the experiences that match our stories, we actually go through life collecting what looks like evidence that our stories are, in fact, valid.

We see evidence for our stories everywhere, because life is our perfect reflection.

Instead of looking out there and understanding that it’s just a reflection of what’s going on in here, most of us learn to believe that the causes of our experiences are external. We learn to believe it starts out there—that the outside world is the cause and our experience is the effect. But that is never truly the case. Our experience of the world starts within us, and then we respond according to what we already believe. In doing so, we create more of the same.

The way the outside world looks to us isn’t the cause; it’s the effect.

Things happen, and then it’s up to us how we experience them. Our experience is the effect of what we believe, not of what happened. Period.

But most people I talk to have a habit of looking at it totally backwards:

“I’m having this experience because the world is unsafe.”

“I’m having this experience because of how I interpret the world and the idea of safety.”

“I can’t get any respect and I feel invisible because they don’t value me.”

“I feel this way because I don’t value me, and they’re reflecting my own beliefs back for me to see.”

“I have to disconnect from him because he has issues.”

No, “I am disconnecting because I don’t know how to interface with him in a way that is grounded, centered, and empowered and allows me to maintain my own boundaries and care for my own needs.”

So what do I do when I have a story like the example above, designed to push away people who love me? Here are my five steps to getting free of unhappy stories:

1. I look for the familiar. If I notice a familiar unhappy feeling, I get suspicious of it. It’s likely that if I’m experiencing the same unhappy feelings over and over, they are a result of an unhappy story, so rather than assuming it’s familiar because it’s objective reality, I assume it’s familiar because it’s part of my very own custom-built, subjective reality that is made up of my own specific beliefs.

2. I get below the feeling to the underlying belief. I ask myself, “What would I have to believe about myself in order to feel this way?” This shows me, in no uncertain terms, what I am believing.

4. Instead of getting reactive when the feeling arises, I slow down. I observe, and I commit to being suspicious of the voices in my head telling me the familiar story. I don’t demonize the voices. I simply acknowledge where they came from and what they’re trying to accomplish, and I evaluate whether they’re really the narratives that I want creating my present relationship dynamics.

5. I muster the courage to respond differently. I remember that my knee-jerk reaction is a result of an unhappy belief or story, and I open myself to the possibility of responding rather than reacting. I sit in the discomfort of the unknown, and I become willing to have a different experience than the one I expected.