The (Crazy Nasty*ss Honey Badger’s) 10-Point Action Plan on How to Stop Trump. 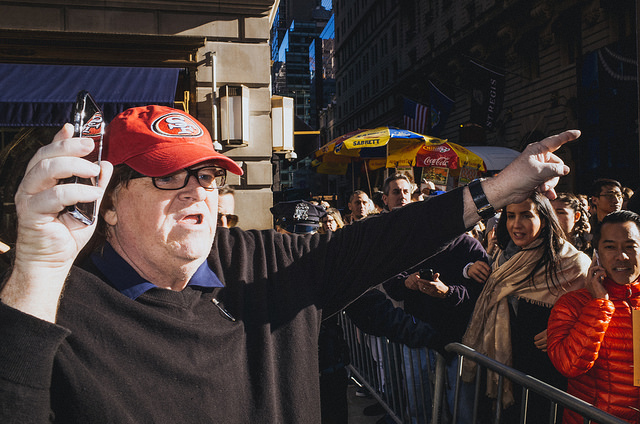 Michael Moore’s stance on the world always reminds me of that video that went crazy on YouTube a few years ago, called The Crazy Nastyass Honey Badger.

He is one badass when it comes to calling out people in power, and he seems to have no fear about the consequences of standing against some of the most elite in the world and their (perhaps) dishonourable activities.

If you’re still foggy on who he is, let me point out that he made one of the highest-grossing documentaries in American history, Fahrenheit 9/11, on George W. Bush and the war on terror. He was also the creator of the Academy Award-winning, Bowling for Columbine.

On Tuesday, 21st February 2017, he released a list that he called, “The Michael Moore Easy-to-Follow 10-Point Plan to Stop Trump.”

In it, he outlines his suggestions on what each of us can do to get Trump out of office.

For those of us who are looking to take constructive action in our political climate right now, here’s Mr. Moore’s list below, for, as he himself says,

“I and you and everyone else has to be a political activist. If we’re not politically active, it ceases to be a democracy.”

It is impossible to overstate just how much power you have by making this simple, quick DAILY CALL. I know from firsthand experience the impact it has. These politicians freak out if they get just 10 calls on an issue. Imagine them getting 10,000! Holy crap – the dome will pop off that building!

NOTE: if you’re saying to yourself, “I don’t need to call because my rep is a Democrat!” ―that is NOT true. They need to hear from you. They need to know they have your support. Don’t believe it? Our beloved Sen. Elizabeth Warren voted in favor of Ben Carson as Secretary of Housing and Urban Development! I’m sure no one in Massachusetts thought they had to call her. YOU DO! She and the other Dems need to hear from the boss―YOU! They work for us ―and what boss doesn’t have daily contact with his or her employees?

Here’s some great news: Someone has created an app to make this very easy: Go to the App Store and get “5 Calls.” The app will dial the friggin’ phone for you and give you talking points for when you speak to your reps!

Here’s what a sample week of your DAILY CALL can look like:

On Monday, call your Congressman/woman and tell them you do not want them to repeal Obamacare. In fact, you want them to improve it so that we have single-payer universal health care like all other “civilized” countries.

On Tuesday, call the first of your two U.S. Senators and tell him to vote NO on Rick Perry for Secretary of Energy. He couldn’t even remember there was a Department of Energy – or what it did!

On Wednesday, call your other U.S. Senator. Demand she do everything in her power to block the appointment of Neil Gorsuch to the U.S. Supreme Court.

On Thursday, call your local State House/Assembly representative in your state capital. Tell her you want the House to vote for legislation that prohibits the incarceration of nonviolent drug users.

On Friday, call your State Senator. Tell him you want him to support all efforts to reduce those activities which cause climate change.

If you’d rather to write to your reps, you can find the best way to do that for each of them here by typing in your address on: democracy.io.

Remember ― A call a day keeps the Trump away.

Also, don’t forget to visit the local office (or the state capitol office) of your State Representative/Assemblyperson, and your State Senator.

And, if you’re lucky to live within driving distance of Washington, DC, show up on Capitol Hill and pay an unannounced (it’s legal!) in-person visit to your U.S. Senators and your Congressman/woman. They pay serious attention to this. It blows their mind that you’d drive that far to see them. Do it!

I know not everyone has the time to do THE MONTHLY VISIT―but if you can, please do!

I and a group of friends have set up THE RESISTANCE CALENDAR that is updated daily, where you can find out what actions are taking place near where you live. All you have to do is type in your city or state in the search bar.

It’s critical that large numbers of us continue to march, protest, sit-in, and be very visible…And the official Women’s March on Washington―they’ve called for a national Women’s Strike on March 8th. Let’s join them!

You must do two things:

Let the DNC know that THIS SATURDAY, February 25th, the Democratic National Committee MUST elect reform and progressive candidate, Congressman Keith Ellison, as the new DNC chair. Keith is a former community organizer, the first Muslim elected to Congress, and a key backer of Bernie Sanders. He not only has Bernie’s support―and mine―but he’s also backed by Chuck Schumer, Harry Reid, Gloria Steinem, John Lewis and many others. Sign his petition of support at www.keithfordnc.org/howyoucanhelp. Let the DNC know how you feel.

And locally, you need to start attending your county Democratic meetings. If possible, organize your friends and others and take over your local Dem organization. More on this at a later date.

Moore feels that the momentum is currently in our favour to halt Trump, if we so desire.

The future of our world truly rests in what each of us decides to do in the present. Just like on the Buddhist path, the work we do today, affects the reality we have tomorrow.

Let’s get to work!