This is the only thing Scarier than Terrorism. 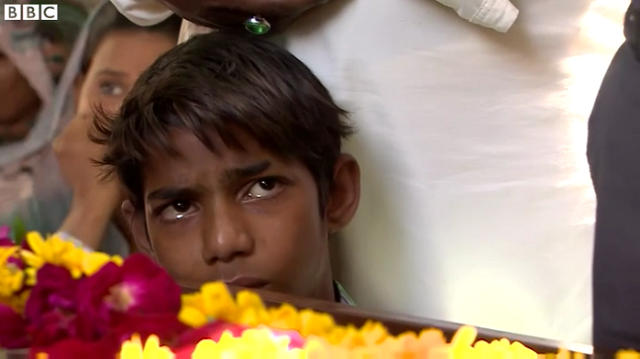 Yet another bomb went off in Pakistan this week, and we barely heard a word.

More than 70 people are dead and hundreds were injured after a suicide bomber walked into the worship hall at the Sufi shrine of Lal Shahbaz Qalandar in Sehwan. Most of the victims were women.

Islamic State militants claimed responsibility for this attack in a country that has been plagued by violence perpetuated by the Taliban and other Islamic radicals, mostly of the Islamic State.

This attack was the worst of several others that have shaken Pakistan this week, prompting the government to shut down the border with Afghanistan. Prime Minister Nawaz Sharif said, “The past few days have been hard, and my heart is with the victims. But we can’t let these events divide us, or scare us. We must stand united in this struggle for the Pakistani identity and universal humanity.”

This is one of the points many Americans are failing to see as the media and current government continues to create fear around Islam. We are losing our ability to see the humans who are being bundled up as one big threat labeled Islam.

There are innocent women, men, children and families suffering because America is scared of Islam.

I hear no outrage. I hear no anger. I only know that I am outraged and angry. My heart breaks for my sisters and brothers across the world who feel much the way I did on the morning of September 11, 2001. Today I remember the shock, grief and fear I felt that morning as I watched the World Trade Center burn from my porch in Hackensack, New Jersey.

Are we becoming so conditioned to these attacks that they don’t even phase us anymore? Are we so caught up in our own fear over the current state of affairs in our country that we can’t pause for a moment to connect to the tragedy our Pakistani brothers and sisters are now mourning?

Instead, I hear callous, ignorant statements such as, “Let them just all kill each other.” I’m sorry. What? I have to stop and wonder if people who make statements like this understand that our government has played a massive role in destabilizing the entire Middle East, which is exactly why these terror groups have been able to take such a firm hold in the area.

Just quickly, I would like to offer some definitions for context. If you are anything like me, you may have a hard time keeping up with who is who, and who hates whom in the Middle East. I don’t say this to sound callous, but I have been trying to gain an understanding of Islamic sects and ethnic minorities for nearly a decade now, and it’s been a complex process.

Founded in the seventh century by the Prophet Mohammed. He founded the first Islamic State in Medina in 622 A.D. Mohammed is to Islam what Jesus is to Christianity. After Mohammed came four caliphs who led Islam. The fourth was Ali.

The Shiite denomination of Islam believes that only the heirs of the fourth caliph, Ali, are legitimate successors of Mohammed as leaders of Islam. It is the second largest branch of Islam. Shiites believe that the Mahdi, “the rightly-guided one” whose role is to bring a just global caliphate into being, has already been here and will return from hiding. (Second coming?)

This is the largest denomination of Islam. Sunnis believe that the first four caliphs after Mohammed each took his place rightfully as a successor to Islam. Thus, they believe that all heirs of the four caliphs are legitimate religious leaders. They believe in regards to the Madhi that he has yet to come and emerge from history. Sunni extremists view their sect as the only real path of Islam, condemning all others (especially Shiites) as apostates.

This term means “a defection or revolt.” It is the formal disaffiliation from, or renunciation of a religion by a person. It can also be defined within the broader context of embracing an opinion contrary to one’s previous beliefs. One who commits apostasy is an “apostate.”

In 2014, Professor Juan Cole, a respected Middle East historian, stated, ”Shiites are more like traditional Catholics in venerating members of the holy family and attending at their shrines. Contemporary Salafi Sunni Islam is more like the militant brand of Protestantism of the late 1500s that denounced intermediaries between God and the individual and actually attacked and destroyed shrines to saints and other holy figures, where pleas for intercession were made.”

It’s ironic that so many Americans are descended from ancestors who were technically religious refugees and victims of what would now be called terrorism, yet struggle to find compassion and sympathy for those now victimized by this very thing.

If our sympathy and compassion for victims of terrorism does not include all victims, we are participating in a serious injustice. To say someone is not a victim because they are of the same religion as the extremist perpetrator shows a troubling rift in humanity. The families in this shrine yesterday were no different than the Canadians recently killed, the travelers in Brussels Airport last year, the concert goers in Paris, the workers in the World Trade Center, the innocent Palestinians and Jewish victims of Hamas, or any one of the nameless victims murdered every month in Nigeria at the hands of Boko Haram.

Attacks are happening all across the world, day after day—so why does it only seem to garner outrage when it takes place in a country that is “like us?”

This infuriates me. This is a problem.

When I am watching my fellow Americans use their so-called compassion and love for only selected groups, my heart breaks. This behavior frightens me—and I don’t scare easily. It shows me we are truly losing touch with our humanity and giving way to fear.

An America that is so filled with fear and close-minded hate that it doesn’t bat an eye when innocents are slaughtered, simply because those innocents are not American or European, frightens me more than the perceived threat of a terrorist attack on American soil. That leaves me with a bitter taste in my throat.

This is not who we are.

This is not what being an American means. I will not allow the terrorists to force me into becoming like them. My heart will remain open to all the world’s beings.

I remember when I was a child, before I understood the politics of the world and its greed, I was proud to be American. Learning about World War I, World War II and even the the Gulf War, I had a naïve faith in the goodness of humanity, and felt intensely proud to be part of a country that fought for the oppressed.

How misguided I was. Yet no matter what ugly truths I learn about the ways of the world and my country or how old I get, no matter how far and wide I travel or what horrors I witness, there is still a little voice inside me that believes in the basic, inherent goodness of humanity.

I have to believe.

And it is with that voice of highest good that I will continue to pray for the victims in Pakistan.