Words that will Change your Life from “The Alchemist.” 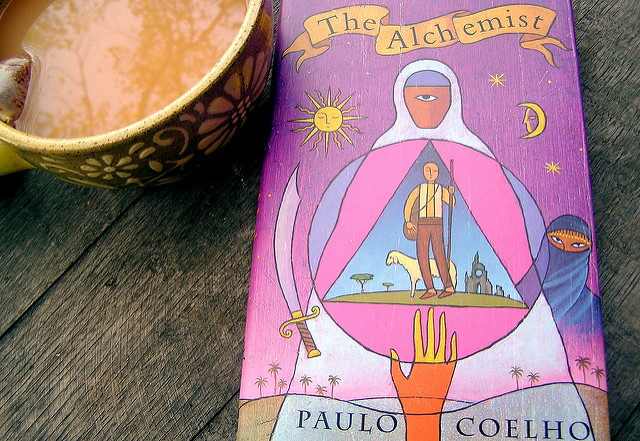 “When you possess great treasures within you, and try to tell others of them, seldom are you believed.” ~ Paulo Coelho

I picked up The Alchemist at an airport kiosk.

I was leaving Vancouver on a cold, drizzly evening. It was a flight I didn’t want to take.

One of my daughters had been living on the western coast of Canada for a year or so, and she’d convinced my other daughter to move out there also.

My eldest daughter and I had just spent a few days visiting with my youngest, and now it was time for me to return to my life on the opposite coast. We’ll be 4,382.2 kilometers apart, but who’s counting?

I don’t know if this was the most miserable day of my life, because there have been others I could mention, but if we’re measuring on the Richter scale, this would be around 8.8 in magnitude—and throw in a tsunami for good measure.

As my eldest was hugging me goodbye, she told me about The Alchemist, and she said it would change my life. Of course I listened to her, because I believe that our children can be our best teachers, and I’ve always been curious about the minds of my own.

As synchronicity would have it, the book was right there at the front of the kiosk. I read it on the flight home, between tears and my heart longing for the young women who would now be a wide country away. Though I was busy with many things that captured my imagination, I felt this parting poignantly. I knew that among all the other times we had shed tears at airports, this would be the most haunting. I was on a precipice—either ready to jump off or to turn away defeated.

As I read each page, my awareness opened to the gifts of this small book, inscribed with profound wisdom.

Since then, I have read many other books written by Paulo Coelho, but this one is special in that it helped launch me into my present life—which, by the way, is living on the same island as my children. My eldest and youngest craftily convinced me to follow the setting sun to their wild coast.

I won’t tell you what the story is about altogether, but I would like to share what Mr. Coelho wrote in the introduction. If he had left it at that, and not expanded the story, it still would have been highly transformative for me; the story simply made it all come to life. But these words, which I’ve re-read recently, still strike me as something that has the power to shift realities and transport us to alternate universes.

I had a dream—and I know that you have one too. Often, when we dream, we have a static idea of what something is and how it might pan out. We can become much like a horse with blinders on, seeing only what each step is in front of us, but missing the bigger picture. My dream was to be a novelist, and I had quite a bit of motivation, but I also had an equal measure of fear. The fear was based on things I had heard, and none of it was based on reality—but it all seemed quite real to me.

The Alchemist helped me to see what my obstacles were—and not surprisingly, most of them were coming from within myself, although I imagined otherwise.

Nothing scary is really out there. Everything is internal, reflected outward onto the canvas of our lives.

If you have felt a budding transformation—a seed that is ready for soil—you may find resonance with these words and take your own leap of faith.

In the introduction, Paulo Coelho is reflecting on the success of his novel and the fact that many of us hear a voice that repeatedly tells us that success is impossible. Failure, on the other hand, is highly probable. If we had been raised on the idea that both success and failure are desirable, this would not be a problem—but we are raised to avoid failure, and therefore, it is a huge monkey on our backs.

The Alchemist is about following our personal calling, or our “legend” as the author calls it, if I were to simplify things greatly. But what is it, and how do we know it? And after that, where do we get the courage to seek it?

There are four obstacles to our journey. I recognized them immediately, as soon as I read them. They were so glaringly obvious that I had to laugh. I’d encountered them so many times that now they even seemed friendly.

Obstacle One: We are told from childhood that what we want is impossible.

That word “impossible” was as much a staple in my Eastern European home as cabbage and potatoes. We bury our dreams under this word, and fear and guilt make a complementary dressing.

Huh? Of course, love! We don’t want to hurt those we love with our crazy, impossible dreams. What if we had to abandon everything to find our legend? Should we really drop it all, and be satisfied with who and what we have? What will our family think? And will we be a disappointment because our dreams make everyone uncomfortable?

The idea of defeat puts us out on a limb. We might look ridiculous if we staked everything on a dream, believed it like lunatics and went around telling everyone it was going to happen. In fact, we have no clue about what we’re doing or if any of it makes sense. However, as Mr. Coelho says, the secret to life is to fall down seven times and get up eight times. I’m not quite where I want to be yet, but when I do, I’ll say it without guilt.

When we believe in our dreams against all odds, we become fully alive—even when we suffer. In the pursuit of my dream, I have suffered loneliness, guilt, worry, unexpected setbacks, and I’ve also flown euphoric when I remembered that this was why I’m here.

We have choices, and we may choose this euphoria amidst suffering, or we may choose to walk away from our legend—our personal calling. And we can come up with plenty of reasons for why we should walk away, and typically only one to keep doing it—that pesky realization that we’re all here for a specific reason. Even if it took you your whole life minus one day to know what that was—or that you had been doing it all along—it would be worth it.

To allow oneself the freedom to dream is a gift that can become buried in bitterness if ignored. Better to risk it all, and live while we’re alive!

Obstacle Four: The Fear of Realizing our Dream

To be honest, this is the obstacle I’ve jumped over a million times. It seems like the most benign, but is the most dangerous.

Do we deserve it? What about all those others who didn’t realize theirs? Who do we think we are?

We could, as decent human beings, martyr ourselves and our dream and be rather saintly as we let it all go for the good of others. We are taught about sacrifice. Sacrifice is good—it shows that we are not selfish.

However, the truth is, a mindful life is a life that pays attention to its purpose. We all have a seed of inspiration buried in our souls, and to uncover it is a form of gratitude and prayer.

Now—several years later, after that day at the airport—I sit at my desk and make plans for my third novel.

My personal legend is before me like a shining pillar—and to be honest, I may have more than one. But this dream of being a writer happened for me because, once aware of my obstacles, I stubbornly plodded on.

All my troubles are internal, even when they seem external. My reaction to what I face is my most dangerous battle.

I hope that you’ll also read The Alchemist and discover the treasures within. Your dream is as important as anyone’s.