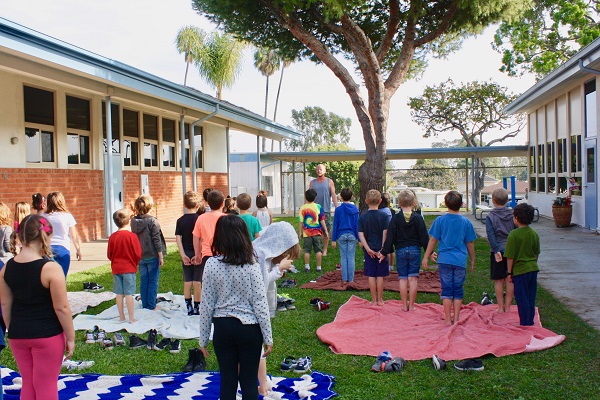 Recently, my eight-year-old son, Buster, asked me to teach yoga to his second-grade classmates.

I asked Buster’s teacher if we could have a yoga class for the kids and she was all for it, but was concerned about the “spiritual” part, since there had been some complaints from parents in the past. That was fine. I was just planning on teaching breath and movement, balance and mindfulness.

The kids were all excited about the idea, and both their teacher and I thought it would just be for giggles, something to reward the class for being so cool this year.

It became so much more.

I set up blankets and sleeping bags on the grass outside of the classroom. The kids and I had so much fun trying to find a pose for every animal they could think of. I wasn’t too stoked with the kid who came up with Platypusana—can somebody please tell me what that would look like?

During our practice, I noticed a boy who was lost and anxious. He looked like he was trying to find an escape, but he just stood there, stock-still as the other kids were bending and giggling and breathing.

His name was Ammon. While the other kids were acting goofy and practicing their best “falling tree” pose (which means, Tree Pose eight-year-old style—also known as, kids like falling), I approached Ammon. He was quite stunning to look at with his one brown and one blue eye. I asked him to practice on my mat, doing what I do as a model for the class.

He seemed reluctant. His distrust of me was obvious. But he did what I told him.

Occasionally, Ammon would fall out of focus. With the gentlest of reminders, he came back to his flow. Sometimes his breath would lose its rhythm and he would become anxious, but when I could take the time to remind him to breathe, he would regain his focus so smoothly. The other kids were falling all over each other. Some were showing off. Some were doing headstands. My son was rocking Crow Pose to the delight of the ladies. I think I even heard him say Bakasana.

The teacher looked concerned by the lack of order. But it was the beautiful controlled chaos that I love so much.

During that maelstrom, Ammon and I were in this little bubble of calm that happens in the most perfect moments of our lives. He was watching me in a way I have never witnessed in a child. It was as if I were an interesting bug to him.

When it came time to chill out, I got the kids into Savasana. I am not sure if you know how difficult it is to get 30 eight-year-olds to lie down, but it finally worked and everybody but Ammon was on their backs. I sat next to him and asked him to breathe with me. He steadied and lengthened each inhalation and exhalation. There was still that distrust in his eyes, but there was also interest as he began to feel the simple act of breath control for what might have been the first time.

Slowly, I talked him down to his back where he lay in Corpse Pose for a full minute with his eyes closed.

I’m not sure if I’ve seen many things more peaceful than that quiet, little boy. Maybe it was because I witnessed the level of struggle it took for him to arrive at this point of calm.

We ended class by sitting and bowing. The kids told me all the cool things that they could do with their bodies. They were stoked. As I spoke with the teacher for a moment, we both turned to see Ammon rolling up the mats without being asked to do so. A little later, he brought me my keys and wallet. And if you know me, you know that I would have spent an hour looking for them.

The teacher clearly seemed shocked with Ammon’s behavior. I didn’t really understand, but after discussing it with her, it made more sense. She told me, “I went home and cried. He’s never responded to anything like that.”

Ammon did not say a word to me during our whole interaction. First, he didn’t have to. He spoke so much through his body and expression and acts of gratitude, like rolling my mats and taking care of my things, that there was no need for talking. Second, I know that autism can be a loaded term, and one I am not generally qualified to speak about, but I found out that Ammon’s case has been difficult. The week we met had been a particularly tough one for him. Our yoga class was the first time he had been able to be around others for any extended period.

The teacher’s reaction made me wonder: If Ammon and his experienced teacher were so effected by this little 45-minute asana practice, what other meaningful effects could yoga have on the modern child?

Searching for more information on the subject, I found multiple reputable studies, all confirming the value of yoga in the classroom, particularly for children with ASD (Autism Spectrum Disorder). Four of the major benefits of introducing kids to yoga are:

3. Enhances self‐regulation, allowing children with ASD to improve attention, control emotions, and focus on the present.

4. Concentrates on the sensory experience, creating a calming and therapeutic environment, stripping away Chitta Vritti, or mind chatter.

My experience with Ammon was a deep surprise for me, but it really shouldn’t have been. I have had enough of these, seemingly, random moments in my life to understand that this was a reminder of how worthwhile our lives can be on an individual and experiential level. Realizing that this was not a one-time thing, and it was not just Ammon’s and my own experience, but that it can be employed in just about any classroom, changed the way I view my teaching.

And I know this is ridiculously sentimental, but I feel like that one class changed my life and the lives of others. I’m so grateful to have been a part of it. 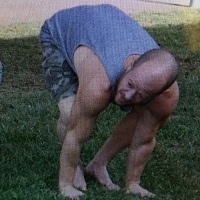