We Can’t just Meditate the Injustice Away. 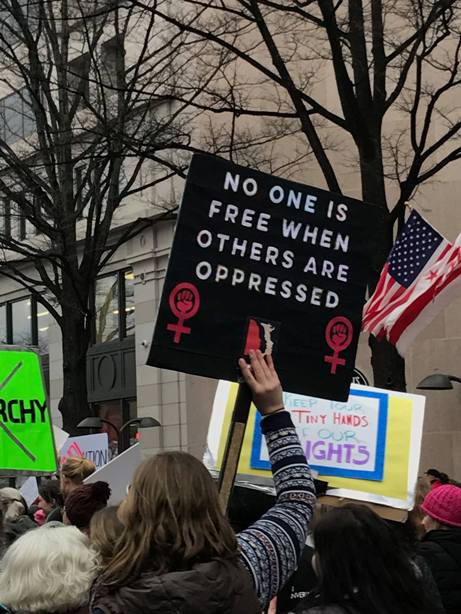 There’s a pervasive idea that yogis can’t be outspoken about injustices in this world without compromising their inner “zen.”

After all, the image of a protester, red faced and marching on Washington with signs held aloft, conflicts with that of the peaceful, meditating yogi.

But this is nonsense.

Let me start off by saying:

Yoga is not political.

But it is compassionate.

One of the key principles of yoga is non-violence, or ahimsa, and compassion is one of the main things that we try to cultivate through meditation. If our beliefs align with love and compassion, then they’re yogic.

Yoga connects us to ourselves. Through yoga, we can delve deep inside, quiet the fluctuations of the mind, and live at peace in our own heads. The understanding we gain of our true selves is astonishing.

But it is not selfish.

I watched the 2016 U.S. election results roll in during the middle of a 500-hour teacher training in Bali, surrounded by yoga instructors from all over the world. Many of us wept openly. The next day, one of our teachers instructed us to practice self-care, but reminded us that none of us can change the world.

While I love the sentiment of remembering to take care of our inner selves, I strongly disagree that we can’t change the world. As the famous Margaret Mead quote goes, “Never doubt that a small group of thoughtful, committed citizens can change the world; indeed, it’s the only thing that ever has.”

Should we accept the things we cannot change…or be the change?

In the face of political unrest in America, I’ve seen these seemingly conflicting reactions arise throughout the greater yoga community.

Waylon Lewis, the Buddhist founder of elephant journal, has been hugely outspoken in support of protesters, even posting himself in a “Make Obama President Again” hat on Instagram. Most other similar yoga publications, such as Yoga Journal and Mind Body Green, have been largely silent on the issue, or have half-heartedly published things like “Yoga Poses For Election Stress.”

Even in the greater philosophical world, these two opposing approaches have risen to the surface. On January 27th, when Donald Trump signed the order banning Syrian refugees and citizens of seven Muslim-majority countries from entering the United States, the Dalai Lama’s Facebook page posted the following quote:

“World peace can only be based on inner peace. If we ask what destroys our inner peace, it’s not weapons and external threats, but our own inner flaws like anger.”

Releasing inner anger is important, of course, but it won’t exactly give homes to refugee children, will it?

The pope, on the other hand, has taken a more direct stance, stating, “It’s hypocrisy to call yourself a Christian and chase away a refugee or someone seeking help, someone who is hungry or thirsty, to toss out someone who is in need of help”—a call to action to help those in need.

I truly believe that both approaches are necessary to get through these times. We have to look both inward and outward. We can’t protest every day without taking any time for self-reflection and self-healing. But we also can’t just meditate the injustice away. 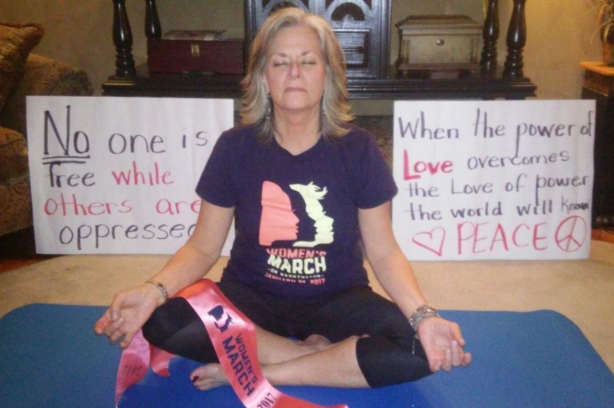 Meditate on what matters most.

It sometimes feels like every day, there is a new outrage. If we try to focus maximum energy on every issue, we’ll burn out quickly. Instead, we should mindfully reflect on what matters most to us, and put our energy there.

Be mindful, not reactionary.

Even when outraged, we shouldn’t let anger be our guide. Once we figure out the most important issues we want to focus on, it’s time to take a moment to research the best ways to address them. If this means calling our Congress people, that’s awesome. If it’s going out and protesting, that’s awesome too. We strive to be to be knowledgeable—enough that if we get stopped for an interview, we can respond intelligently and thoughtfully without doing damage to the cause.

Be peaceful and compassionate.

We should follow in the lead of Martin Luther King Jr. and Gandhi. It is completely understandable to be angry enough to want to go around punching Nazis. But our yogic lifestyle would suggest that we try educating Nazis first.

Seriously, it’s possible. During the Women’s March on Washington, my mom reconnected with an old friend she hadn’t seen in 10 years, and they held hands and beamed with joy the whole time. The whole march was energizing and joyful because it brought people together in the name of love and compassion. The resistance movement can own that energy because we know love always wins.

We shouldn’t forget our yoga practice. Yoga and meditation soothes the soul. Taking time to step back from the situation is the best way to heal, so disconnecting from social media and taking personal time is vitally important.

Yoga is meant to be shared. When we see others suffering from political anxiety and depression, we can teach them the breathing techniques that help give us greater peace. We are social creatures, and helping others has been proven to reduce our own anxiety as well.

Mostly, let’s all remember to breathe. Through level-headed activism, yogis can set an example of peaceful protest that brings the love and compassion we cultivate into a world-altering practice. 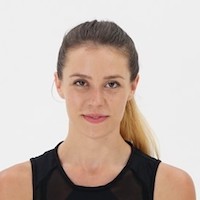