Russia is Trump’s Death Star: Blow it Up & the Administration will Fall. 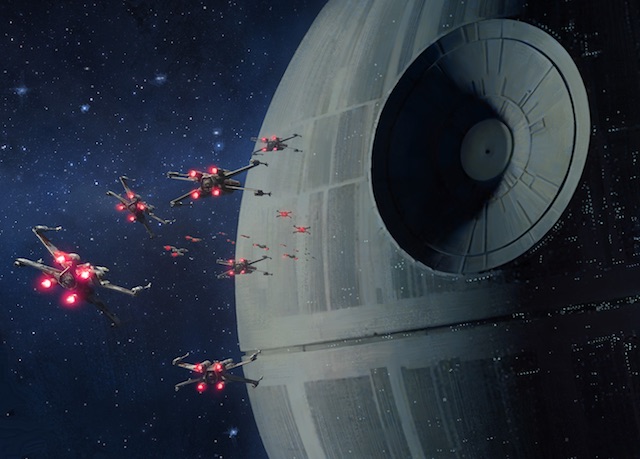 The idea that a Russian autocrat might forge a deal with an American presidential candidate to hack his opponent’s emails and craft their contents into fake news stories, in exchange for lifting sanctions and ending his countries’ isolation, is reminiscent of spy novels like The Manchurian Candidate.

Hence, it is of little surprise Americans have been slow to draw together the threads of what may prove to be the greatest heist in political history. And yet, all of the evidence points to collusion, if not outright coordination, between Donald Trump and Vladmir Putin.

Let’s start with what we know for certain. There is no doubt Trump invited Russia to hack Hillary Clinton’s emails, because he did so live on television. We also know 17 American intelligence agencies believe Russia hacked the Democratic National Committee and Clinton’s emails. We know they believe the operation began with the intention of weakening and discrediting Clinton and expanded into an effort to get Trump elected. We know the FBI believes Russia tampered with American electoral systems. And we know Trump failed to condemn either the hacking or the attacks.

And while some may doubt whether we can trust the intelligence community, we know lifelong intelligence officials who may not like the results have not leaked information that might sabotage the investigation. And we know the Republican Senate Majority Leader and Speaker of the House support the Congressional inquiry into the hacking, and that leading Republicans also have found the classified documents they have seen troubling.

We know Trump is heavily invested in Russia, because he said so to a group of investors in 2008. We know his businesses became increasingly reliant on Russian financing after conventional banks ceased lending to him following his many bankruptcies. And we know Trump broke a longstanding presidential tradition in refusing to release his tax returns, which would reveal the nature and extent of his investments.

We know Trump’s team has close ties to Russia as well. We know his former campaign manager, Paul Manafort, consulted for the pro-Russian Ukrainian President, Viktor Yanukovich. We know his National Security Advisor, Michael Flynn, frequently appeared on Russia Today and secretly negotiated with Russia prior to the election, which was illegal and resulted in his resignation.

We know his Attorney General talked with the Russian diplomat prior to the election and lied about it to Congress, resulting in his recusal from the investigation into Russia’s hacking of the electoral system. And we know his Secretary of State, Rex Tillerson, was personally awarded a medal of honor by Putin himself and that Exxon, under his leadership, lobbied hard for the removal of Russian sanctions in order to win a multi-billion dollar oil exploration deal under the Arctic Ocean.

We know numerous members of the administration have investments in Russia, and that it is common practice for Putin to buy support. We know the Chief Ethics Counsels to both President Obama and George W. Bush stated Trump’s investments involve taking a stream of payments from foreign governments and thus constitute an unconstitutional conflict of interests for which they counseled the electoral college to reject Trump. And we know Trump has refused to disinvest.

While these ties open the door to speculation, they provide only circumstantial evidence. The bigger question lies in whether Trump won the presidency through coordinating a massive disinformation campaign with the leader of a rival power. If this is the case, then the collusion between Trump and Putin was arguably an act of treason.

And this looks to be the case, for we know Russia engaged in a massive disinformation campaign in support of Trump, which involved the propagation of countless fake news stories. We know these reports influenced voters, because as the stories spread on social media sites, Clinton lost ground to Trump in polls.

We now know several European states reported Russia also tried to hack their electoral systems. We know rightwing populist leaders, like Marine Le Pen of France and Nigel Farage of the United Kingdom, seek to pull their countries closer to Russia and to break apart the European Union (E.U.). And we know they spread their own disinformation, as in the Brexit campaign, which may ultimately bring down the E.U.

Finally, we know Trump has criticized virtually everyone but Putin. He compared America’s intelligence agencies to Nazis, called Republican Senator John McCain a loser for being imprisoned by the Vietcong, hung up on the president of Australia, and even insulted the Secret Service for their poor work. But even as he admitted Russia probably hacked Clinton’s emails, even as the intelligence agencies reported Russia’s violation of American electoral systems, even as they hacked the electoral systems of allies, Trump failed to criticize Putin in any way whatsoever.

Trump has signaled to Putin that he welcomes Russian interference in American elections. He has signaled he will do nothing to stop Putin if they interfere again. And he has signaled he will not censure Putin for his actions but will instead reward him by removing American sanctions. Whether any of this will lead to definitive proof that there was direct coordination between Trump and Putin or that some kind of a deal was struck between them may be inconsequential. Trump implicitly coordinated his campaign with the attack of a rival power to win the election, and members of his administration stand to profit from it substantially. The coordination was implicit insofar as it involved regular responses to one another’s actions, which worked to support Trump. That should be enough for his impeachment.

But it is also quite possible future historians will look back on electoral hacking as an act of war. For damaging the political institutions of a rival power arguably does more harm to its people than bombings and shootings. And it is often done with the intent to bring down a government and weaken the state. It is quite likely it would be treated as an act of war if Russia was not at the forefront of these attacks and did not possess a sufficient number of nuclear warheads to turn the United States, as a major announcing for Russia’s top state news station noted, “into radioactive dust.”

But if this were the case, then the American President just got elected largely through an act of war he has yet to condemn and from which he stands to benefit immensely. And if he coordinated this campaign, explicit or implicit, with the people attacking his country, then the American President just waged war on the country he now leads. Needless to say, few centrists or conservatives would stand by such a traitor should the argument be pressed. And quite a few may find themselves joining in chants to “lock him up.” Russia is surely Trump’s own personal “Death Star.” Blow it up and the administration will fall to pieces.