This is How a Democracy Devolves into Tyranny. 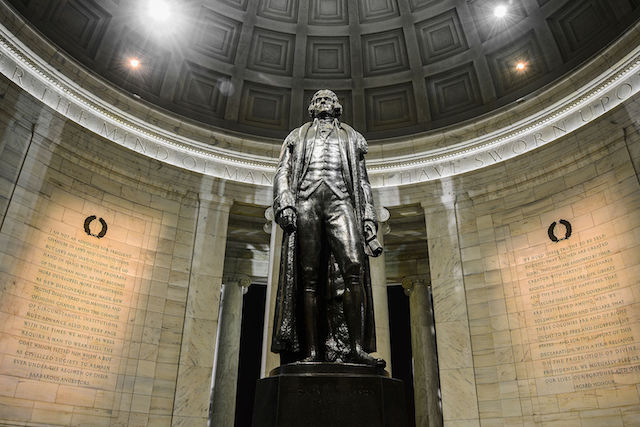 America was the first modern nation to become a democracy, but if Trump continues to rule by executive decree, it may also be the first stable, developed democracy to devolve into tyranny.

Plato believed that governments pass through several stages, the last of which involves a devolution from democracy into tyranny. But it has been much more common in the modern era for nations to evolve from tyranny to democracy, as did the former Soviet states of Eastern Europe.

However, America has long been an exception, and many Americans sense their country slipping into tyranny. The feelings spring from multiple sources: the massive infusion of cash into political campaigns, the growth of familial dynasties and the rise of billionaire candidates, the erratic and untruthful nature of so much political debate, the fracturing of the electorate into extremes, and the decline of reason. But the most salient sign of a slide to tyranny is the president who behaves like tyrant.

In his philosophical classic, The Republic, Plato emphasized that tyranny is as much a state of mind as it is a political condition. The tyrant lacks control over himself and so lurches from program to program. Tyrants have bad tempers because they lack control over their own emotions, but they are also poorly tempered in the musical sense of being out of tune. Tyrants cannot control themselves because they lack discipline and have never gone through the arduous process of refining their thoughts, so they tend to grab at new ideas only to discard them again, like a monkey in an endless search for gratification. The leader then instills this inner state of disharmony in the nation itself.

Tyrants are defined less by their powers and more by the way those powers are wielded. A monarch may have the freedom to rule by decree, but a wise monarch will consult advisers and debate contingencies before deciding on a course of action. Wise leaders proceed with caution, because it is hard to build support and difficult to know what might go wrong until it is thoroughly debated, especially when they are swimming in uncharted seas. But tyrants issue decrees on a whim and do their best to shut down debate.

It is a picture seemingly painted with the current American president in mind. While most presidents pick their first battles carefully—seeking to build consensus through congressional and public dialogue, which builds support and secures an image of gravitas—Trump has fired off a multitude of controversial executive decrees in just his first few weeks in office. Meanwhile, he has laid out virtually nothing for debate, as if congressional approval no longer matters.

Plato believed that democracies are particularly prone to devolving into tyranny because they are vulnerable to takeover by demagogues. These are people who tell the crowds what they want to hear in order to gain power. The demagogue may know what they are promising is not possible, but they play on the ignorance of the masses for their own political profit. Since democracies are run by majority rule, there is always a danger that an erratic demagogue will be voted into office, and in never leaving, transform a democracy into tyranny.

This is what so many Americans fear from Trump. However, it would be the first time a stable and developed democracy in the modern world devolved into tyranny. And this probably has a lot to do with the nature of modern democracies. The American Constitution was deliberately crafted in order to prevent such a devolution. This is why it has so many checks and balances, making genuine rule by executive decree all but impossible.

But it is often said that a government is only as good as its people. American institutions have come to lack legitimacy in the eyes of many of citizens. This probably has a lot more to do with the party that is now in power having deliberately made them illegitimate through chronic obstruction and ideological attack. But if a sufficient mass of people are more interested in enacting their agenda than in maintaining democratic institutions, those institutions may fall like a house of cards in the wind.

The world has gradually passed from one representative democracy in 1787 to roughly 87 or so today. States like Germany, which passed from the democratic Weimar Republic to the tyrannical Third Reich were actually quite new to democracy; and young democracies like Iraq are often powder kegs of pent up energy waiting to break free. But no stable and developed democracy has ever devolved into an autocracy in the modern era. And yet, there is a first time for everything, and democracy is now on the decline globally for the first time in generations.

The path to modern democracy was long and arduous. It began with nobles reigning in the power of absolute rulers they sought to place under constitutional rule. But the nobles went further in most of Europe and America, demanding that they be included in regular parliaments if they were to support the wars of their monarchs and consent to being taxed. And it was precisely the absence of such representation that led American elites to boycott the British and eventually spark the Revolutionary War.

Over the generations, democratic institutions have become ever more inclusive of poor people, women and people of color. And state institutions have grown in size and proficiency, making for stronger nations, bound together by a common citizenry, shaped into nations by institutions and interests shared in common.

It is difficult to imagine how one man might overturn this vast edifice—difficult to imagine that so many people would so readily consent to rule by a tyrant. And yet, everything is falling into place like dominoes, and we need only look at the logic behind the momentum to see where it might lead if we do not vigorously defend our democratic institutions now.

Over the course of the next several months, liberals and progressives are likely to experience their most cherished government policies shot down and mowed over like grass. In the process, many will react the most strongly to the fate of their own most beloved issues, say, gay marriage or climate change. But we would do well to train our attention less on specific issues and more on the damage that is being done to the system as a whole.

If we cannot feel the same love for our most basic democratic institutions, like freedom of speech and assembly, congress and the courts, we may find ourselves losing on every front and ultimately losing the ability to ever fight again in the battlefield of democratic debate. That is why we must attune our attention to the integrity of institutions and learn to love what we had until yesterday taken for granted.