Why we’re Addicted to Donald Trump & How to get Clean. 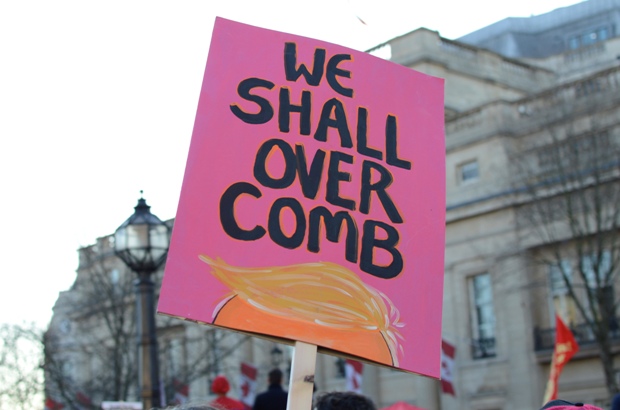 I’ve been wrestling with discomfort lately — mostly a kind of fear about the alarming United States political scene. It’s gotten under my skin in a way that reminds me of the post 9/11 anthrax scare, where just opening my mailbox caused my palms to sweat and my heart to race. These days, every scary Trump-related news bulletin—including atomic scientists moving the doomsday clock forward thanks to Trump—is starting to have the same fight-or-flight effect.

And yet, I keep following the spectacle.

I keep turning on the radio in my car for the on-the-hour CBC news that, even in Canada, features yet another unbelievably outrageous report of the latest Trump shenanigans. And don’t get me started on my new CNN love affair, second only to dispatches by The Guardian, like a recent story about the president citing a terrorist attack in Sweden that never happened.

But why are we all so hooked on following stories about someone in the Oval Office who seems to be a narcissistic authoritarian? Why can’t we emotionally un-hook from the drama?

I think I’ve found the answer.

Drum-roll, please: Humans are wired for story—-as outlined in a book titled with the same phrase.

Written for writers, Wired for Story  reveals research that shows the human brain loves to mainline stories. We get hooked via our dopamine receptors on a gripping narrative the same way a junkie gets hooked on heroin.

Simply, we are story-craving creatures.

When it comes to following a story like President Donald Trump, people will choose to follow either the resistance story or the acceptance story, each following ideological trends. If you are right wing, you are likely cheering on the Trump tale and tuning into Fox News. And the centrists and lefties are predictably railing against that same storyline and glued to CNN.

But even in this push back, we are hooked by the story arc itself. In the same way people love horror stories, we get mesmerized by the very thing we can barely stand to watch. We want to look away from the movie screen just before the psychopath kills the victim, but we are riveted.

With the Trump political story, it’s almost impossible not to tune into the latest. This news is better than the best daytime soap opera meets House of Cards meets Game of Thrones. It’s one big OMG, jaw-dropping, nail-biting yarn.

It’s such an attention-grabbing yarn that it makes the whole “Putin’s a thug” and “golden-boy Trudeau” story-lines fade by comparison. I mean, we’ve all seen brutal dictator stories before (Idi Amin and Muammar Gaddafi) and we’ve consumed ample feel-good benevolent king stories too (John F. Kennedy and the Camelot mythos and Barack Obama as the the first black president).

But when was the last time we got hooked on a mad king tale? Other than Game of Thrones’ King Aerys II Targaryen, a mentally unwell political leadership has yet to carve a niche in the contemporary collective.

So, we’re globally hooked to a harrowing tale of a president who may very well be a malignant narcissist (60,000 mental health professionals can’t be wrong) or even what Jungians call a high chair tyrant. Because it seems clear to a lot of story-followers that—independent of his right-wing policy choices, fanatic inner circle or rash actions—Trump rarely sounds coherent, he continually self-contradicts and he takes everything so painfully personally.

“I’m not a bad guy,” he implored at that now infamous 90 minute meandering press conference.

No Donald, but you are not a good guy either.

So, now that you know why you are emotionally hooked to the news drama, here’s the withdrawal-free antidote, the Naloxone for the Trump addiction:

Take the brain’s natural wired-for-story inclination and harness it by telling a story instead of just following one.

What do I mean, exactly? Well, I recently listened to an interview of the show Buddha at the Gas Pump with Duane Elgin, author of the book, The Living Universe. According to Elgin, we story-tell our reality into being. In a way, we are all bards of our reality in what amounts to a storied universe.

For example, I can create a narrative of the current environmental chaos as one of Earth suffering birth pangs or in the throes of death. If I choose to engage in the birth story, it offers me the chance to be a midwife to a new environmental reality instead of simply grieving the loss of an old one. One story empowers. The other disempowers.

I decided yesterday to apply this story-telling super power to my Trump angst. Because from the Canadian sidelines, I cannot change anything about Donald Trump and his administration. But I can completely revise my relationship to these things by selecting a new story of this unfolding drama, one that allows me to participate instead of simply watch.

Until now, I’ve felt like a bystander to a horrifying accident scene — and not just any kind of accident, but the toxic spill kind that threatens to spread suffering far beyond the bounds of the original U.S. leakage of xenophobic, sexist and hyper-nationalistic politics.

And hey, if Trump is an accidental toxic spill, that’s a story that calls for containment and clean up. I can work with that story more than the narrative of, say, a puppet president acting on strings from far right ideologues like chief White House strategist Steve Bannon.

See what I mean? I feel better already.

Today, I’ve decided to get clean.

I’m ending my addiction—cold turkey—to the ongoing shock-news story of Donald Trump. I am going to stop passively following the story at the expense of telling my own story. This does not mean turning off my car radio, but it does mean that even as the news is being heard, I can choose my own narrative within that larger political story.

What powerful new story do I wish to tell?

I am not sure yet. But it will be a tale that allows me to re-engage with the current Trump drama in a way that engages my heroic self. When I find the truest story for me, and tell it from my heart, then I will not only be at peace, but I will be able to play my role in ways that are aligned with my soul, and that look and feel like right action instead of reaction.

Simply, the story I choose to tell defines the reality I live. As Wired for Story author Lisa Cron explains, “Story, as it turns out, was crucial to our evolution — more so than opposable thumbs. Opposable thumbs let us hang on; story told us what to hang on to.”

What are you hanging on to when it comes to the Trump tale? If it’s the adrenaline high of a frightening story, I urge you to step away from the news just long enough to find the thread of the true story within you that wants to be told.

Those true stories are soul songs. Let’s sing them together.