Chicken with Gatorade Anyone? Chopped! 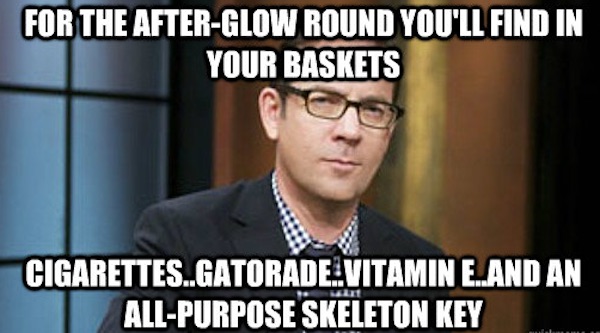 I binge on the Food Network show Chopped! the same way my husband binges on football every Sunday afternoon.

Whenever it’s on, I sit there transfixed and I can’t seem to get enough. Sometimes it is an all day affair.

I lay there with my feet up, and call plays from the couch, while nibbling on a tray of expertly prepared cheese and crackers.

I yell at the TV and roll my eyes the same way he does, “That grill pan is not hot enough! Oh my God! What are you doing? You’ve got to showcase the protein. Candied bacon is over, don’t do it! You can’t cook a rib roast in 20 minutes, you moron! French toast? Seriously?” I scream all sorts of things, complete with dramatic hand gestures and a few pillow punches.

During commercials, I quietly pick at the crumbs and bits of sharp cheddar that have fallen onto the front of my shirt.

Often, I shake my head in disbelief at what the over-confident contestants present to the skeptical and grim-faced judges. I watch in horror as they anxiously try to explain the choices they made in defense of their outlandish and inedible dishes.

In many cases, their creations look exactly like a pile of crap on a plate. Gray, lumpy purees—with green bits. Peppermint-stick mashed potatoes. Cadbury Crème egg dipping sauce for a seared, but completely raw, red snapper. Way too much broth. Unrested meat. A lack of salt.

I watch these gaffes from professionally trained, working chefs and I pompously think, “Geez, how hard could it be?”

Because, almost every night, I open my own “mystery basket” of ingredients (by way of whatever is sitting in my fridge and cabinets,) and I manage to cook something pretty great in less than 20 minutes. My husband will playfully inquire, “What’s in the mystery basket tonight?” and I might reply, “Broiled cauliflower with garlic salt coupled with leftover cranberry chicken salad on wheat toast, with avocado slices and drops of truffle oil,” He will quietly ask, as his shoulders sink, “Are you sure that chicken is still good?” to which I might reply, “No!”

I’ve applied to be on one of the “amateur cooks” episodes, and I just know I’m going to get that casting call any day now. I can feel it, smell it, and taste it!

Of course no one in my family believes in me or supports my dream of becoming a Chopped! champion. Rightly so I guess, given my history.

Let’s see, there was the bubbling baked Ziti I once made using maple syrup flavored breakfast sausage because I didn’t think the flavor would be that strong. There were the big containers of homemade ketchup and mayonnaise that sat in the fridge all summer long with nary the soft sound of a Tupperware lid pop. One time I prepared fresh gnocchi that was, apparently, a bit “difficult to chew.”

There was the time I whipped up a heavily “red pepper-flaked” creamy vegetable medley soup that almost put us all in the hospital. I’ve regularly incited the smoke alarm, only to shamefully scrape heaping plates of wasted food into the garbage.

My family feels as though I would be chopped before the first round was even over, but whatever. Screw them.

I’m not proud of my culinary blunders, but they are what made me the battle-worn warrior home cook I am today. I am confident that my vast experience with not knowing what the hell to make for a meal at any given time, and the endless snarky judging of my food from the ingrates that live with me, will surely propel me to a $10,000 victory in the Chopped! kitchen.

I’m going to win, because I have a plan for everything.

When I see that prickly sea urchin in my basket, I won’t panic. I’ll jack it open, mince up the innards, and stuff them inside something else. Cilantro-infused sea urchin street taco pastry puffs with lime sour cream glaze, anyone?

Goat balls? Well, all I know is that I’ve got to wrestle that tough, outer membrane off those little suckers first, and then poach them—tender balls require poaching.

Sweetbreads? The fact that I even know what they are puts me into round two.

Eel? Tempura-battered medallions coming right up. I’d fry the sh*t out of them like I’m working the funnel cake counter at a carnival.

Gigantic ostrich egg? Is there ever anything wrong with a savory mini quiche of some sort?

Vegetable yeast spread? Ooof. Maybe add a touch of it to some melted cheese and make a queso? Cheese hides disgusting flavors too. If this ingredient appeared in my basket, I would be all about hiding it—without apology.

I watch the show a lot—I’ve seen all the mistakes that the chefs make.

They forget a basket ingredient. They run out of time. They fail to develop a flavor profile. Onions and pasta should be avoided—always. Yet someone will serve them up with a worried smile. They leave pin bones in the fish. Meat is usually under-cooked, or over-cooked. They cut themselves and bleed all over the food. There’s all sorts of running, slipping, and falling down with hot pans and half the ingredients flying everywhere. They burn stuff. They get cocky.

And while I laugh as these mistakes play out dramatically on TV, I also know, deep down, who I am.

I’m the gal who would probably do all of the above, coupled with the most animated facial expressions, and cut my whole hand clean off right on camera. I would be the contestant who has the unfortunate blender explosion that splatters watery, steaming, greenish-brown sauce all over Ted Allen’s Irish linen suit.

But, in saying all of that, I still think I have a shot at the title. Why? Because if I get to the dessert round, my big plan is to somehow incorporate an Oreo cookie crumble, which works like a charm, every time.

Also, if I cry at some point during the show about how “I just want to prove something to myself,” I think I’ll have a chance. I will make the judges think I’m doing it for my kids, or for my sick grandmother—who I want to visit in Tuscany before she dies.

Maybe I’ll hoard all the eggs so the other contestants have to ask me for one. This will make me seem nice, and I’ve noticed that the judges soften considerably when this happens.

I would know that the anti-griddle has to get over itself because it’s just a goddamn cold rectangular pan. I would remember that the ice-cream machine has weird pieces, and it’s difficult to figure out, so I’d steer clear of it. Ice-cream for dessert is a little too obvious anyway.

Oh, and I’d drink wine throughout the entire episode, you know, just to stay loose. I might even wear a bandana to add intimidation to the equation.

I could win because I have a memory like a steel trap, and I know how to play dirty.

Now, if only the phone would ring.