Houseplants Aren’t as Green as We Think—here’s the Dirt. 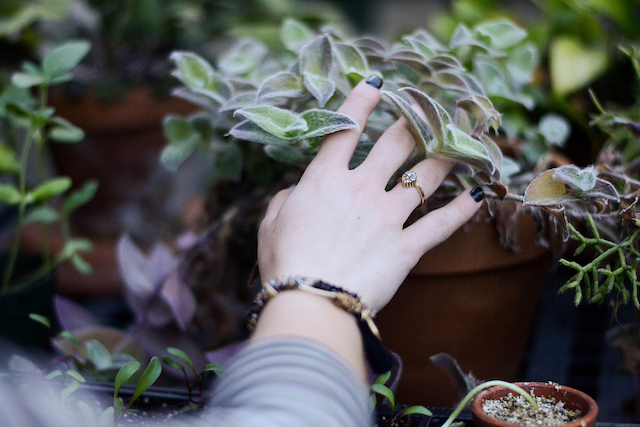 How healthy is our fetish for houseplants?

While searching online for baby-proofing tips, I came across an article about common toxic indoor plants. In a flash of embarrassment, I realized I knew nothing about the plants gracing my home.

I expected all the baby-proofing basics—hiding cords, finding “cap thingies” for the electrical sockets, elevating curtain strings, picking up all the appetizing floor debris—but toxic plants? Is that even a thing?

I’ll admit I’m not exactly a green thumb—I didn’t even know what kinds of plants I had. Some were passed on from the previous owners of the house and some I bought from my local grocery store. Fortunately, I’ve managed to keep (most of) them alive.

Hanging in my living room I have one vibrant vine varietal that I can now name—devil’s ivy—also known as the golden pothos or money plant. It sprawls across the ceiling and drapes around our big south-facing windows.

When I recently visited Dubai, I noticed my mother-in-law has the same plant in her desert home. A couple of weeks ago, on a trip to Hawaii, I saw the same plant while out on a hike. (Did I mention I live in Alaska?)

At first, I thought this was a great example of how globalization brought us closer together. However, once I got past this little “kumbaya moment,” it dawned on me this might not be the sweet fairytale it seemed.

I belatedly asked: Is this plant toxic if ingested? The unfortunate answer was easy to find—yes.

Following this discovery, subsequent questions continued to unfurl: Where do our houseplants come from, anyway? Why do we have them? Are they as sustainable as one might assume?

Although we have been living in tandem for millennia, it wasn’t until the height of European colonialism that houseplants really took hold in our lives.

In addition to “discovering” (conquering) new lands, explorers and imperialists sent exotic plants back to their patrons like living mementos. King Louis XIV, for example, had a thing for orange trees and exotic animals. The list goes on. Heard of cocoa? Coffee? These plants didn’t land on European soil by accident.

Eventually, mechanical development allowed us to grow hot weather plants closer to home. With the invention of the greenhouse, tropical and subtropical plants could now be grown in non-indigenous colder climes.

All facts aside, what was it about the devil’s ivy that allowed it to climb its way into our homes?

Devil’s ivy is a quintessential houseplant. You’d easily recognize it, with its long, trailing vines and spade shaped emerald leaves that dangle from its hanging basket.

The plant itself is originally native to the South Central Pacific region, on the island of Mo’orea in French Polynesia.

The devil’s ivy in my own home was one we inherited with our house. I’m unsure where it originated, but I suspect it came from a clipping—kind of like friendship bread or a SCOBY. Most likely, it was shipped up to Alaska from an out-of-state nursery. Maybe it was even smuggled. (Or maybe I’ve just seen French Kiss one too many times.)

The unfortunate truth is, by breeding and transporting plants like devil’s ivy around the United States, we’re seeing the propagation of monocultures. In Hawaii, devil’s ivy is considered an invasive species, and after my own research, frankly, I agree. While many of us appreciate its presence in our spaces, it is threatening the biodiversity of our delicate ecosystems.

So I pose the question: Are houseplants as green as we think? I don’t think so.

Currently, there is an estimated $18 billion in the American floral industry. According to the Economist, the industry is also consolidating at an astonishing rate, “Since 1992 the number of florist shops in America has fallen from 27,000 to 15,000.” This means fewer local nurseries and greenhouses. Most cut flowers—about 65 percent in 2013—were imported from Colombia alone.

Even the way we grow houseplants nowadays deviates further and further from nature. “Micropropagation has enabled plants to be produced in huge numbers, with small sections of leaf grown on in Petri dishes in a laboratory. The resulting plants are genetically identical, and bulk production means they are now affordable—a third or even a quarter of the retail price of 15 years ago.”

Don’t get me wrong, I love my houseplants, especially during the darkness of winter. I love having a bit of fresh green to remind me the snow will eventually disappear and the sun will return.

I’m not suggesting we give our houseplants up. I’m proposing that instead of buying monocultural houseplants we commit to supporting local greenhouses and learning about our regions’ indigenous plants.

Let’s grow sustainable, eco-friendly plants instead. Let’s get outside and learn about the plants growing in our own backyards.

Next time you’re considering a fully grown houseplant, look at the label to see where it came from.

There’s sure to be a deep-rooted story sitting in that humble pot.