How Not Giving a F*ck is Essential for Peace. 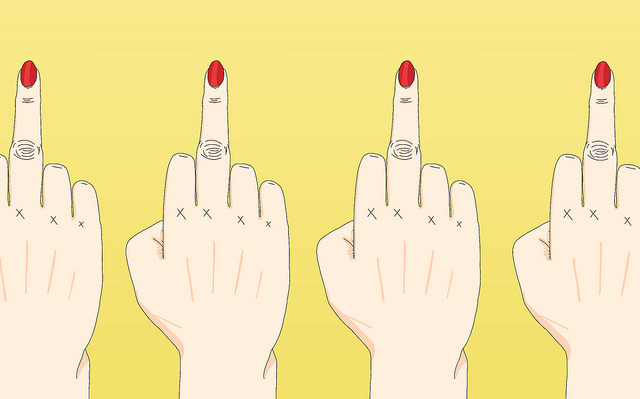 It was recently brought to my attention that I use a lot of profanity.

If profanity offends you, please keep in mind that you just clicked on an article with the f-bomb in the title—so, no judgment, please.

I should preface this by saying that while I curse like a drunken sailor on the regular, I am aware of time and place. I don’t, for instance, use profanity around children, or my parents, or in a work situation. I don’t even use it in every article I write.

Yes, I do use it occasionally on Facebook—although abbreviations often suffice. Some of my favorites include: af and FFS (“as f*ck” and “for f*ck’s sake,” for the unenlightened). I may use it lightheartedly with a friend or to express a strong feeling. It just depends.

I’ve been told that I’m “too intelligent” for that sort of language, and I do even get the occasional reader comment suggesting that I tone it down.

First of all, researchers now believe that swearing a lot is linked to higher intelligence. Part of me wants to add: So put that in your pipe and smoke it. However, smoking is unhealthy, and a snarky response is rarely successful in persuading others.

Secondly, I don’t really give a f*ck about anyone’s opinions about my use of profanity. In fact, I’ll go one further and say that not giving a f*ck is essential for our peace.

Here are a couple of problems with caring about what other people think:

>> People are rarely thinking of us as much as we may think, and it is a little narcissistic to believe that they are.

>> When we care too much about what other people think, it can influence our decisions in negative ways. Think peer pressure. Think group psychology, which includes a mob mentality.

That’s just for starters. When we stop caring about what other people think, we are free to think, feel, and behave in ways that are authentic to ourselves. When we serve our own souls—and not everyone else’s opinions—we are often happier, which helps us to be better people. We can follow our own dreams and surround ourselves with a strong support system. When we’re both authentic and happy, we are able to take better care of those around us. We cannot fill from an empty cup.

We are also less judgmental. When we focus less on what other people think of our actions, we also focus less on judging others for how they live. We’re too busy living our own lives to worry about everyone else. A preoccupation with what others may (or may not) think about us shows that we’re spending too much time looking outward than inward, and we need an inward focus to become centered and peaceful. We cannot find our way to peace by walking the thin line of public approval.

To be honest, there are still areas where I’m influenced by other people’s opinions. There aren’t many, but they do exist. And every day, I’m working toward completely releasing my attachment to what other people think.

I need to do this for my inner peace—because at the end of the day, it’s my life, and the time we’re given isn’t long. I don’t want to waste a single second worrying about what other people think, but here are a few ways to stop giving a f*ck for the sake of our inner peace.

When someone judges us, we can remind ourselves that they haven’t walked in our shoes. From their perspective, perhaps we’re making the wrong choice, but their perspective isn’t our own. We need to be our authentic selves with confidence and release our attachment to approval.

When we worry about what other people think, we can remember to draw our attention inward to our own processes and needs, rather than focusing outward. As a writer, I know that the topics that I fear addressing the most are the ones that need to be addressed.

Writing is a constant journey inward, and it helps me stay in touch with my own heart and soul and to drown out the outside voices seeking to control my narrative. By focusing on how I think and feel, instead of the perception of others, I can be sure to make the right decision for my life.

We can clarify our priorities and learn to act on them. A year ago, I limited my political posts in an effort to keep the peace among friends and family. By the end of the year, I deeply regretted not being more vocal about my own beliefs. Sure, it may not have influenced anyone else, but I would have been left with the knowledge that I had done my part in standing up for my beliefs.

Now, I don’t worry if someone will be offended when I bring attention to something like the concentration camps in Chechnya. I do what I need to do to speak out against human rights violations, because it’s important to me, and I don’t have time to tally up the disapproval some of these posts might receive. For me, it’s more important to speak up for climate change or Black Lives Matter than it is to win some kind of silent approval in the minds of the public.

When we focus on other people’s reactions, we can remind ourselves that we have only this one life (depending on one’s belief system, of course). There was a time when I followed society’s blueprint, and I was deeply unhappy. It took writing my own rules and finding the core of my authentic self to break away from that. I don’t worry about society’s view of my status or wealth. I don’t try to meet anyone else’s standard of parenting or success. I live my life free from those concerns.

Now, I’m not saying we should be sociopaths, unconcerned with other people’s feelings. In fact, I think when we live authentically, we’re more respectful of other people’s rights to do the same. We can be more compassionate and less judgmental when we’re at peace with ourselves.

Yes, I swear a lot. And no, it doesn’t mean that I’m unintelligent. It doesn’t mean that I don’t have a sufficient vocabulary. The fact that I choose to use one word over another doesn’t solely define my character. However, even explaining ourselves reveals an attachment to what other people think. And maybe it shows that our boundaries aren’t as strong as they need to be with others.

As we continue to release whatever attachments we have to the opinions of others, we can remind ourselves that enlightenment and peace doesn’t come with an outward preoccupation with the views of others. We can free ourselves from judgment (and from judging others) simply by learning not to care about approval.

Peace is a journey inward, and it cannot be achieved as long as we are attached to approval.