I Survived the Turkish Uprising—here’s why I still Vote. 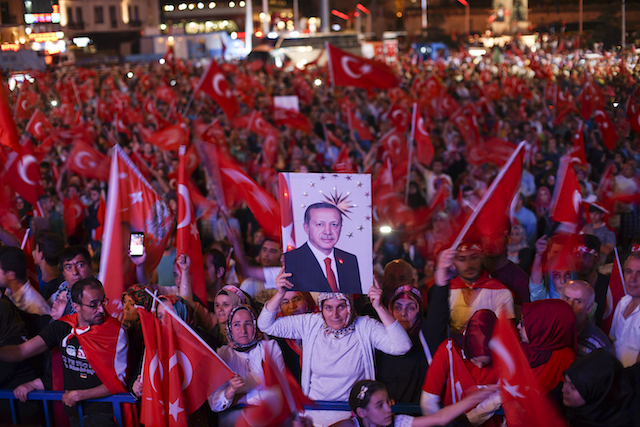 I voted today. I took the 6-train to the Turkish consulate in Midtown and voted. Just like that.

It took less than five minutes. I didn’t feel excited, angry, nervous, hopeful, or hopeless. I did it with the same nonchalance I exude going to the grocery store to buy a roll of paper towels. But voting for me has not always been such a bland affair.

Before now, the last time I voted was the final day I spent with my soon-to-be-ex-husband in our home of six years. I had packed my bags and thrown away nearly all my possessions, except my books, artwork, and some clothing. With heavy hearts, we walked to the local elementary school near a park on our street. I’d voted in four elections over three years (presidential, local, general, and the following general election.) Disappointingly, the results left our economy comatose and most ordinary people out of their gourds.

I’d always felt emotional when voting. I pictured millions of fellow countrymen and women like me making a choice that would affect all our lives in every way. From the way we make and spend money to how we interact with each other in society—it all could change. I was proud, even volunteering to count ballots in two elections that year.

Now, don’t mistake me for a politics junkie. I am an art writer and a dreamer who tried to stay as far away from the ”real world” and political drama as possible. That is, until one fateful May morning when the police tried to burn the tents of environmental activists sleeping at Gezi Park.

Most of my generation will attest to the fact that the event known as the Gezi Uprising became a milestone in our political and spiritual awakening. Never before had people like me (30-something, educated, urban types) seen this kind of oppression, manipulation, or resistance firsthand. Some of us knew there was more to the news than reported by the state-controlled media, but some had no clue or didn’t care about what happened outside their social spheres.

In the face of this brutality, I was shocked and sick to my stomach. How could I possibly process the absurdity of the situation? Peaceful protests were deemed terrorist acts. Innocent kids were killed, and those of us resisting were seemingly defenseless against the riot police. We felt cheated, not only for what was happening in front of our eyes but also for what happened in the past to people like us—young and passionate, opposing the view of our government. We were depicted as terrorists, and many were tortured, jailed or killed.

A group I met later had practiced Reiki during the uprising, sending loving energy to the prime minister to stop the disproportionate retaliation on the part of the police. The media reported their efforts as ”an assassination attempt by telekinesis.” My friends, even non-artists, started painting. Some danced and some meditated—anything to respond.

Personally, I struggled to maintain a sense of balance when the financial institution sponsoring the art magazine I edited backed away after we published a feature on Gezi Park protest art. To cope with the uncertainty and stress, I began transformational breathwork sessions. This practice guided me in becoming the politically aware and spiritually conscious human I am today.

After voting day, the last night with my soon-to-be-ex-husband, we returned home to volunteer online for a watchdog agency comparing ballots with the reported results. Somehow the election seemed as significant as the end of our 10-year-long relationship. We were both heartbroken knowing we had to part ways for our separate journeys. We knew it was our personal choices that caused us to outgrow this marriage, so we hoped to make better and different choices in the future.

We wanted some hope for our lives, to trust we could be happy again, but the country we lived in did not offer much to inspire it. The leader we opposed had won again. Our home country had declined into an authoritarian trainwreck posing as a democracy.

It’s been roughly a year and a half since that election. My country is preparing to vote again, this time deciding if the residing authoritarian will be a de facto (official) dictator with the power to dissolve parliament as he desires. My country has changed, and I have too. I let my hair grow, got divorced, have managed to keep a regular meditation practice, and started a new life in a new country hoping to find space from the disheartening politics I’ve endured all these years.

Despite all this, I returned to the polls. I used to feel emotional when voting, but I don’t anymore. It’s not because I moved away—my country will always be home—it’s because I stopped expecting to win. I vote without expectation. I vote because it’s my responsibility as a citizen and a human being. I’ve made a decision to live consciously and responsibly, even in the face of the prevailing insanity in our world. No matter the outcome, it is my duty to continue on.