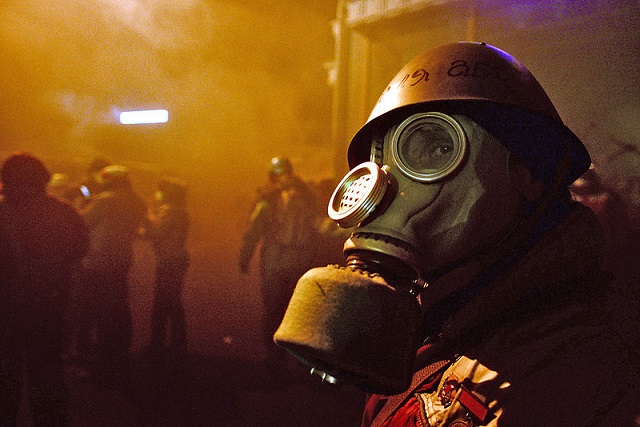 My understanding of chemical weapons is that they represent the intentional creation of a wasteland that disregards all of the freedoms, differences, and moments we hold dear. That sort of disregard for young fingers, toes, minds, possibilities, and life creates waves of offense that alternately sicken, anger, and repulse us.

They inspire a compassion so intense that we can’t sit still.

We are stunned by such disregard—we stand innocent and naked, with fight-or-flight tearing at our hearts and limbs. White-knuckled, we grasp for vindication. Falling into ourselves, we grab for anything to prop us up, to stop our fall. The emotional shock waves of the unnecessary death and suffering that our own DNA is capable of leaves the Richter Scale in the dust not yet settled.

We want to strike out, careening from the inherent lessons of the heinous to vindication by proxy. But killing murderers never really pleases their victims. Revenge only passes the mean, slow time between the doubling down of sensations that the truly horrible inspires in us. Admitting those feelings and rigorously focusing attention on ourselves has us present, but never ready for the next wave of discovering who we are and what we are capable of when we are upset or are reminded how much we love, care, and hate.

Revenge for the unthinkable can’t come from thinking—it has to vault from mind to heart, tearing us so wide open that we can’t imagine vindication as a solution (or an action) inspired by anger.

Sometimes, in the face of something so horrific, we must sit on our hands until we know that the babies, children, and adults—who were the immediate brunt of this first wave of total disregard for humanity—were (impossible as it may seem) an impolite introduction to our own shadow and those of others who we perceive as threats.

All events are connected, and all humans are the perpetrators of everything done by any one person. it is the very attempt to separate ourselves from something too horrible that has us dodging our own depths of depravity. We reflexively—and without reflection—snap as far as we can get from the roots of the horrendous. That recoil separates the yoke from the lily-white of us—smothering our presence with what seems to be rational, necessary action, but is really just hair of the dog that bit us.

Whatever comes next has to overflow with love, acceptance, and an endless embrace of us all. That isn’t to say that we don’t attack—we are always attacking. It isn’t to say that we don’t seek to take actions that will inhibit such a thing from ever happening again. However, when it’s raining, we remember that the roof leaks—and when it stops raining, we lose the motivation and inspiration to put tar to wood or hammer to shingles.

Basically, we need to do nothing at all—to sit still and silent when we wish to strike out, and when the reign of terror has stopped, we need to call on our greatest depth of creativity to make absolutely certain that this never, ever happens again by nurturing the aspects of us that it brings out.

I’m not pretending that any of us are mature enough to muster and hoard this kind of restraint—but until we do, the best we can hope for is measured retaliation, and minds casting shadows on hearts with innocent casualties, because we are all innocent when it comes to the truly terrible mischief we get up to when we are upset.

Chemical weapons and warfare are escalations from the collection of uncomfortable moments before. They are the manifestations of too many secrets withheld, too much pain born, and the obvious next step to a mind so irrational and boxed in that the impossibly unjustifiable only makes sense.

It just takes a moment to pull the trigger, to press the button, to release the very venom that we have created in a saner moment to protect us from the delusion of an enemy.

Our reaction is natural, but it too is inspired by insane moments prevailing and the perception of an enemy outside of ourselves.

We are all neighbors—thinking sardines—wanting to dream that there are things we wouldn’t do, lines we wouldn’t cross, and thoughts we wouldn’t think. But that’s just plain silly.

Our resistance to growing up, letting the sun shine on all aspects of ourselves, and taking responsibility for the actions undertaken in the name of righteousness by our shadows makes violence a likely solution, when we find ourselves in the corner with the gun we have purchased to protect ourselves, or the weapons of mass destruction that they (or we) have amassed for when some offense seems insurmountable—that only the suffering, death, and sacrifice of others will vindicate us.

It’s easy to sing about peace or flash the peace sign when we aren’t upset. But if caught in traffic, or with our emotional pants down, or if someone has taken something from us, then we too strike out, and the magnitude of our response is only limited to the weapons at hand.