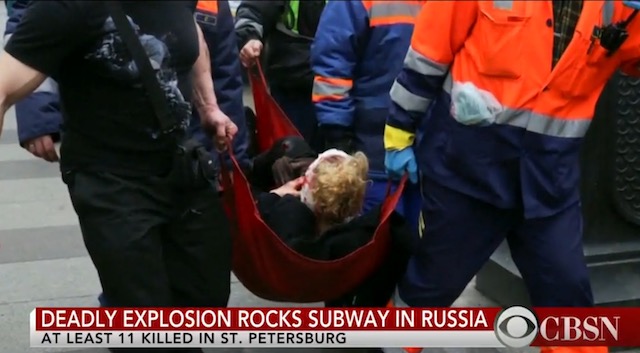 Have we become so callous and conditioned to bombings and attacks in such a short period of time that we just carry on with our tasks in the face of these events?

The explosion struck a crowded metro train near the historic city center at 2:20 p.m. local time, and came as President Putin was visiting the city of St. Petersburg. One bomb exploded and security sources told the Interfax news agency that “the device was homemade. The device appeared to have been packed full of shrapnel including metal nuts and bolts to cause maximum damage and had been left in the carriage in a backpack by the attacker.”

Later on, a second bomb disguised as a fire extinguisher was found at the Ploshchad Vosstaniya metro station. This device, which failed to explode, was reported to contain more explosives, prompting investigators to conclude that it was intended as the main attack.

The Telegraph reports that The Investigative Committee, Russia’s top investigative agency, opened a terrorism investigation and issued search warrants for two people in connection with the attack, while Putin cautioned, “The reasons behind it are not clear yet, and so it would be premature to speak about them.”

Just a year ago, the world reeled when Paris was attacked, closely followed by Belgium. French flags showed up all over Facebook as we stood in solidarity with our European neighbors. I am sad to say that to me, it feels as though with each attack since then, we bat less and less of an eye at these events. It seems they’ve become normal.

Perhaps it’s due to the fact that I witnessed 9/11 from across the Hudson River and no matter how much time goes by, I can’t forget the chaos and uncertainty of that day. I can’t help but pause in connection with those who are going through that same trauma as we speak and those who have gone through it all across the world at an ever increasing rate.

Have we become so conditioned by the propaganda machine that is our media that we are forgetting our humanity toward our Russian brothers and sisters? I cannot allow myself to fall prey to the apathy that enables this. I will hold space for our Russian friends.

This is one of the points many Americans are failing to see as the media and current government continues to create fear around Islam and Russia. They’ve become lumped together into some mega monster to keep us in fear so we don’t look to the real enemy. We are losing our ability to see the humans who are being bundled up as one big threat called “Russia.”

There are innocent women, men, children, and families suffering because America is scared of everything the media tells us to be scared of.

I hear no outrage. I hear no anger. I only know that I am outraged and angry. My heart breaks for my sisters and brothers across the world who feel much the way I did on the morning of September 11, 2001. Today, I connect with that memory, and I remember the shock, grief, and fear I felt that morning as I watched the World Trade Center burn and crumble from my porch in Hackensack, New Jersey.

Are we so caught up in our own fear over the current state of affairs in our country that we can’t pause for a moment to connect to the tragedy our brothers and sisters across the world are now mourning?

Separation will never be the way forward.

When I am watching my fellow Americans use their so-called compassion and love for only selected groups, my heart breaks. This behavior frightens me—and I don’t scare easily. It shows me we are truly losing touch with our humanity and giving way to fear.

An America that is so filled with fear and close-minded hate that it doesn’t bat an eye when innocents are slaughtered, simply because those innocents are not American or European, frightens me more than the perceived threat of a terrorist attack on American soil. That leaves me with a bitter taste in my mouth.

This is not who we are.

This is not what being an American means. I will not allow the terrorists to force me into becoming like them. My heart will remain open to all the world’s beings no matter who I am told is my enemy.

Be wary of those who want to tell you who to fear.