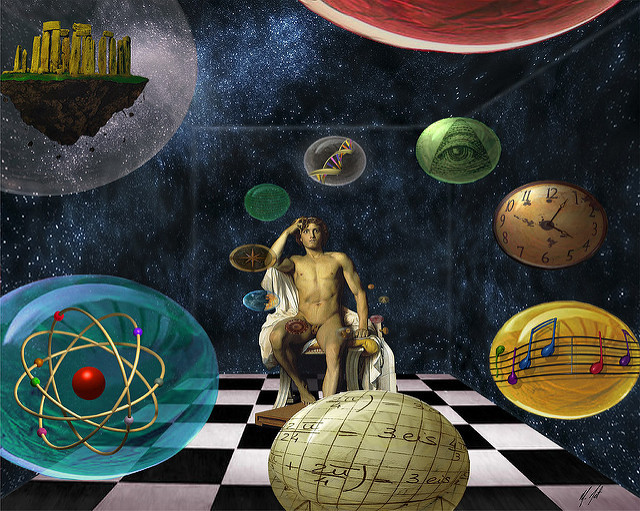 During the Summer of Love, I was wandering around Golden Gate Park, having hitched into San Francisco earlier that day. A tall, thin, long-haired fellow in bright yellow pants and a rainbow tie-dyed shirt approached me.

“What’s yours?” I asked, not the least bit sure of what my sign was or why it mattered.

“Me too,” I said, unaware that he would take the similarity of our signs as a red cape for his bull’s charge.

Instantly, he offered me his place to crash, which I accepted innocently, unaware of where this was going. Given that love was in the air that summer, he probably could have taken any sign as an indication of compatibility.

Later at his place, down went his fancy yellow pants, revealing no underwear and skinny, hairy legs. As fast as you can say “Age of Aquarius” I was out the door, and I walked the streets of San Francisco until the sun came up.

That was my first brush with astrology. While it wasn’t a great one, it wasn’t terrible either. I still occasionally get flashbacks of what I missed that night, but don’t seem to have any regrets. But that one evening inspired me to learn my sign, which led to my second experience with the stars.

Many years later, I met a beautiful young woman the day before my birthday. She offered to do my chart, which wasn’t what I had in mind, but accepted as a distant, second-best option. Later the next evening, we sat next to a lively fire pit as she read from an astrology book.

She was beautiful, as I said, and a self-proclaimed astrologer who was better at doing readings on horses than people. I alternately looked at her, the fire, and then back at her. I was happy to have company on my birthday, but totally stymied by the fact that offering a “reading” just meant that she would read.

So, thus far, astrology has directed me toward sex I didn’t want and away from sex that I did.

As a hard-charging Leo optimist with the lake house rising, this means to me that astrology is at least sexy, and that my next engagement with the celestial realms is likely to be better than the first two. So, when it comes to astrology, things are looking up.

I have a friend who drinks loads of juice. She makes it herself from organic veggies, and it is yummy.
“What do you do with all the stuff that is left after you juice?” I asked her one day.

“I compost it,” she said proudly.

As an avid salad-munching bunny, I wondered if I should be throwing away more of the veggies than I was. Reading a bit on the web and submitting to my last refuge (common sense), I concluded that the roughage juicers throw away really is good for us.

I tried eating my friends compost. “Yuck,” I said. It tasted awful and was difficult to chew.

Not wanting to give up juicing all together, I pondered what I might juice without all the waste. It took me a while, but I came up with the ideal food to juice—cotton candy. There is no waste, and like juicing veggies, the end result is some nice, colored sugar water.

As a healthy eater, I don’t drink sugar water, but I do so enjoy putting cotton candy through the juicer. I still use my Champion juicer to make all sorts of cold, fruit, ice-cream treats, but that is without the screen in that makes it a juicer.

I’ve found that having a scientifically-oriented friend is as important as having a magically-focused one, because then—depending on the situation—you can consult both and find a middle path that offers the common sense of science and the fun of magic.

I sent my scientific friend ear candles. She used them in her lab to heat up some potion or other. I sent her another batch with a note that explained their use.

She quickly discovered that the residue that remains after burning an ear candle in her ear was the exact same as when she burned it in a candle holder. She concluded that burning candles in one’s ear might be fun, but it isn’t scientifically useful.

Being thorough, she bought a two-inch diameter, apple-pie-scented candle at Walmart, which was cheaper than the ear candles. She whittled it down until it fit in her ear. She burned it and dozed off, dreaming of Thanksgiving and her mother.

She has now purchased some other candles including spring mist, bubble gum, and tangerine dreams. She will be fitting them in her ear and is enjoying the whole experiment.

It seems to me that we came here to be sensitive, to ignite our senses with every sort of input we can—so, we are all really replete with empathic ability, though most of us could use some practice at becoming better listeners. Calling oneself an empath is really a passive-aggressive complaint, the basis of which is that sensitivity is both blessing and curse.

“Narcissist,” unlike “empath,” is a psychological term indicating a genuine imbalance of attention in, over attention out. Certified narcissists live so far over to one extreme of the self indulgent scale that they simply can’t function in the real world.

Who most of us call narcissists are really just lovers, friends, or family who don’t give us attention when we want it.

Though I know many of my constellations, I don’t attribute my behavior or attitude to the moon and stars. If you want to, then please, have at it—but don’t expect me to buy it when you suggest that you got fired or can’t see me anymore because of the arrangement of the heavens.

When it comes to juicing, ear candles, or our abilities as caring people (or amateur psychologists), living is the most fun when we don’t fixate on one belief system or set of truths. Bouncing back and forth between logic to magic, science to mysticism, or juicing vegetarian to steak-grabbing carnivore provides the flexibility and variety that makes life really interesting.

Every few months, it makes sense to write a list of our top five beliefs and set aside any that were on our last list, inviting in new beliefs, new realities, and new aspects of ourselves to step into the limelight of our own vast variability.