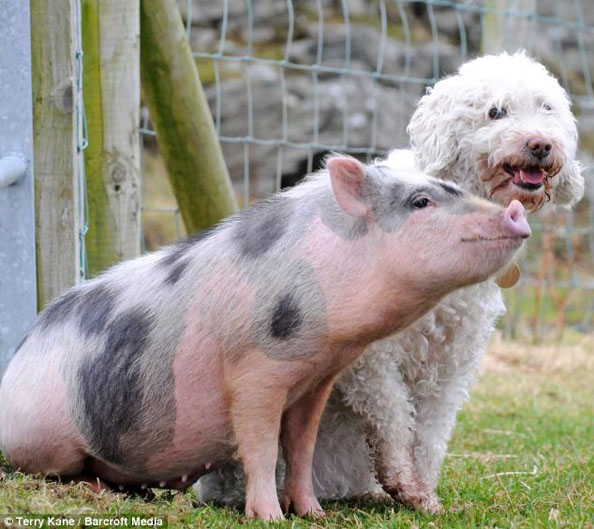 “Sometimes people hold a core belief that is very strong. When they are presented with evidence that works against that belief, the new evidence cannot be accepted. It would create a feeling that is extremely uncomfortable, called cognitive dissonance. And because it is so important to protect the core belief, they will rationalize, ignore, and even deny anything that doesn’t fit in with the core belief.” ~ Frantz Fanon, Black Skin, White Masks

Most of us live in a society whereby it is deemed perfectly normal to eat a lamb that has been stolen from its mother, yet, if we were to eat a puppy, there would be mass public anger and outrage.

This is visible by the growing backlash to China’s Yulin Festival—where dog meat is a traditional delicacy yet many of us are mortified that people would consider eating a dog. There is no doubt that dogs are treated barbarically before and during this event, however, in the Western world many animals spend their entire lives in unimaginable emotional, mental, and physical pain before facing a terrifying slaughter.

Melanie Joy, author of Why We Love Dogs, Eat Pigs, and Wear Cows: An Introduction to Carnism, coined the term carnism to describe the ingrained cultural conditioning that takes place which allows people to disconnect from compassion so that they can participate in inhumane practices guilt-free.

“Carn” means flesh and “ism” indicates a belief system, therefore the word describes someone who holds a belief that eating flesh is acceptable.

Carnism is the belief system, or ideology, that conditions the brain to accept that it is perfectly okay and generally considered “normal” to eat certain animals and that it is barbaric and disgusting to consume others.

The official website for carnism describes carnism as a, “violent belief system organized around intensive, extensive, and unnecessary violence toward animals,” adding, “In short, carnism is a system of oppression. It is enabled by an unjust exercise of power that causes unnecessary harm to billions of individuals.”

Mercy For Animals is an organization that relentlessly works to expose and raise awareness for animal abuse and campaigns tirelessly to bring an end to the needless cruelty and suffering caused by the meat, egg, and dairy industry. They have carried out numerous investigations at factory farms, exposing widespread horrific, sadistic, and needless acts of cruelty toward animals.

Mercy for Animals explain on their website that despite the fact that pigs, cows, fish, chicken, and other farmed animals are intelligent, unique creatures—no different from dogs and cats—they endure brutal cruelty behind the closed doors of the factory farms that most spend their entire lives in.

Although the majority of people are aware that most farmed animals are treated barbarically, they still choose continue to eat them—and usually not for survival.

It might be easier on the heart to turn a blind eye, pretend it isn’t happening, and live in an imaginative bubble where animal cruelty doesn’t exist—but unfortunately, doing any of that will not solve the issue that across the world there is extreme abuse toward billions of countless innocent, defenseless creatures every second of the day.

We often hear about organizations advocating for veganism to save the planet, or about the adverse health conditions we can suffer due to consuming meat or dairy. However, Melanie Joy takes a different approach and explains the cognitive dissonance that occurs when people say they love and care about animals yet still opt to eat or wear them, while knowing the abuse they endure.

In her book, Joy describes the sophisticated, psychological defense mechanism that kicks into place so that people emotionally and psychologically disconnect between the food that is on their plates and the suffering the animal experienced before its flesh, fluids, or eggs arrived there.

She describes how people’s core values, ethics, and morals are compromised when they consume meat or dairy and yet justify this by telling themselves that it is “normal, natural, and necessary.” Joy believes this has a huge impact on our hearts and minds, as many people would naturally feel empathy for an animal that is suffering, however, as soon as it is time to eat, carnism provides us with the ability to instantly dissolve our empathy.

Rather than thinking of animals as individual beings, carnism encourages us to irrationally believe that animals are stock, without individual personalities, and to conclude that they were placed on this planet solely for human consumption.

A gap in our consciousness is created as different cultures classify different animals as edible. Depending on the dominant beliefs and behaviors of each culture, we select certain animals as acceptable to farm, kill, and eat, while feeling disgusted or offended at the thought of doing this to others.

Many people are affectionate and loving toward the animals they share their homes with, yet don’t see how contradicting it is to then buy into extreme cruelty by purchasing the flesh or fluids of other creatures to satisfy their taste buds.

The ironic thing about this is that vegan food is delicious, healthy, and nutritious as the food industry has evolved to such a degree that it is now possible to get a variety of tasty alternatives to meat that are entirely cruelty free.

Many people see images of animals suffering in cages and factory farms and turn away in disgust as the cruelty prevalent in the food industry is far too horrific for many to contemplate, and yet their compassion diminishes when they later settle down to eat the product of the horror they witnessed.

Just like veganism and vegetarianism are belief systems, carnism is a belief system too. Veganism and carnism are at opposite ends of the spectrum. However, when questioned about their individual beliefs about animal cruelty, the majority of people would likely feel the same way about it—it is horrific and needs to end.

Often people are wary of dairy-free alternatives, as they have gotten used to the tastes of their regular brands. However, alternatives available in most supermarkets are deliciously flavored and almost everyone I’ve spoken with prefers them. Besides the taste, the feeling gained through purchasing cruelty-free options outweighs whatever slight taste differences there may be.

Although it seems difficult, if not impossible, to force the industries to make significant changes to end the suffering of the 56 billion farmed animals that are killed annually, we can all help immediately by altering our diets.

For those who do not want to become vegan or vegetarian at this stage, just by reducing meat consumption and helping to raise awareness like many others have done will collectively make a difference.

We do not need to leave it to the industries to make the choices for us; we all have the ability to make compassionate choices each and every time we purchase food, drinks, and clothing.

The over 56 billion farmed animals that are killed each year, do not even include fish, as those numbers are too great to count.

By choosing eco-friendly, ethical, cruelty-free options, and helping to raise awareness, we will collectively make a dramatic difference in our health, the environment, the treatment of animals, and global poverty and hunger.

“There is no fundamental difference between man and animals in their ability to feel pleasure and pain, happiness, and misery.” ~ Charles Darwin