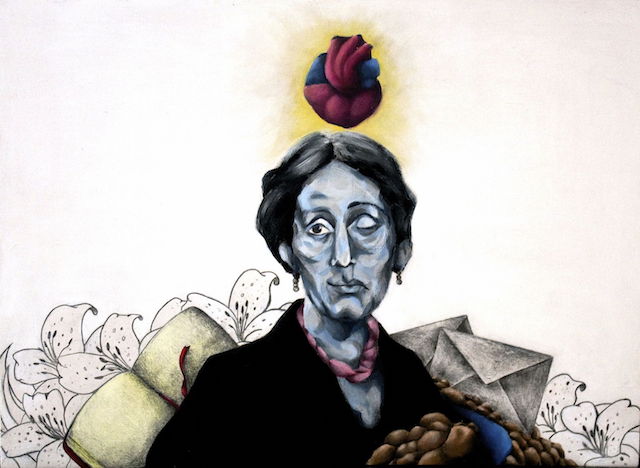 ~
When we think of Virginia Woolf,
we tend to bring up her eloquent verses, her powerful and alluring inflection, the stark beauty of her verbiage, and her seemingly innate ability to encapsulate the great expanses of the human experience with sheer finesse and refinement.

Perhaps we think of her place in the Modernist movement, her vital role in the philosophical and artistic surge of of the early 1900s. Though one thing we have perhaps in some ways neglected in regards to the legacy of Virginia Woolf is how she laid the groundwork for the initial waves of the feminist movement—how through her writing, she helped pave the way for gender equality and women’s rights for years to come.

Being someone who was raised primarily by his mother, I am personally indebted to Virginia Woolf for her part in cultivating this most essential social principle, that of equal opportunity amidst different genders. I would like to do my best to repay this debt of gratitude through further articulating how her writing prefaced the proliferation of these values and the expansion of feminist thought.

So, I recently ordered a copy of A Room Of One’s Own, an extended essay by Woolf on the role of women in literature, and I have been chipping away at it with an eager haste.

I just finished two of her acclaimed novels, that of To The Lighthouse and The Waves. Thought these text I had came to know Woolf in regards to the immense fluidity and expressiveness of her storytelling voice and her capacity to articulate the human experience through anecdote and narration.

I suppose it is not much of a surprise that she is a brilliant essayist as well. Nonetheless, I’ve garnered a great deal from her pointed realism and her ability to aptly communicate the historical struggle of women to “have a room of one’s own,” so to speak.

I would say her essential thesis, if she even approached her essay as such, would be that in the realm of artistry, men have had a profound advantage both socially and economically, and that for a woman to truly meet her potential as an artist, she must come to transcend these conditioned barriers, moving beyond these deeply ingrained limitations that have been so incremental in determining the trajectory of culture. She said:

“A woman, then, who was born with a gift of poetry in the 16th century, was an unhappy woman, a woman at strife against herself. All of the conditions of her life, all of her own instincts, were hostile to the state of mind which is needed to set free whatever is in the brain.”

One thing that really struck me while reading was her ability to express the inner world of women who aspired to create—to skillfully communicate with honesty the war that was happening inside any woman who wished to step out of her predetermined role and seemingly immovable function in society. I can really empathize with the inner state that she describes, which is both a testament to her writing prowess, as well as her deeply experiential understanding of the subject at hand.

“Her mind must have been strained and her vitality lowered by the need of opposing this, of disproving that. For here again we come within range of that very interesting and obscure masculine complex which has had so much influence upon the women’s movement; that deep seated desire, not so much she shall be inferior as that he shall be superior, which plants him wherever one looks, not only in front of the arts, but barring the way to politics too, even when the risk to himself seems infinitesimal and the suppliant humble and devoted.”

I feel as though she rightly encompasses the underlying psychological forces that have led to and perpetuated this “masculine complex” that has truly taken the reigns of modern civilization. She is also rather careful about demonizing the masculine enterprise, which is crucial if we are to have an honest and open conversation about gender roles and social
equity.

Virginia seems to have a tight grasp on the existential underpinnings of gender inequality, which has less to do with an actual hatred of women as it does with the egoic propensity of men to prop themselves up. It is more of a narcissistic tendency than some kind of innate misogyny or intrinsic chauvinism that men carry, which isn’t my attempt to make it seem any less insidious, for surely a tremendous amount of suffering has arisen out of it regardless of psychological basis.

Much of the difficulty of being an aspiring female artist, outside of the obvious oppression and ridicule women have experienced over time simply on the basis of gender, is the lack of experience they had access to, the scarcity of opportunity that existed for women to feel the fullness of life. They did not have the same encouragement towards adventure and travel; in fact, quite the opposite.

“At the same time there was a young man living freely with this gypsy or with that great lady; going to the wars; picking up unhindered and uncensored all that varied experience of human life which served him so splendidly later when he came to write his books. Had Tolstoy lived at the Priory in seclusion with a married lady, ‘cut off from what is called the world,’ however edifying the moral lesson, he could scarcely, I thought, have written War And Peace.”

This is something I can relate to. I’ve been contending with a series of deeply-rooted chronic infections over the past few years that have been tremendously debilitating and disheartening, and in that my creative endeavors have become profoundly more difficult being that I don’t have the same abundance of experience as some of my peers. Things that come easy to most 23-year-old people—nights on the town, long hikes in nature, or working odd jobs—are virtually impossible for me, and therein my life has become deeply “hindered and censored.”

I don’t mean to compare chronic illness to being a woman; I mean to convey that Woolf’s sentiments resonate with my experience, and to some extent, I understand what it must’ve been like to try and move against the immense resistance and adversity of male dominator culture as “the lesser sex.” Perhaps this is why the book so spoke to me.

“To have lived a free life in London in the 16th century would have meant for a woman who was a poet and playwright a nervous stress and dilemma which might well have killed her. Had she survived, whatever she had written would have been twisted and transformed, issuing from a strained and morbid imagination. And undoubtedly, I thought, looking at the shelf where there are no plays by women, her work would have gone unsigned.”

Of course, we don’t live in the 16th century, and women are not nearly as oppressed as they have been in the past, but this does not mean that it isn’t important, if not entirely essential, for us to understand the historical context of gender oppression and inequality. Now, more than ever, it is highly valuable that we have a grasp on the manners through which certain groups, classes, and races have been structurally beaten down. That doesn’t mean we have to be ardently assertive ideologues, yelling at anyone who opposes us—for surely, this only creates a greater divide.

As Woolf understood, it is useless and malicious to demonize those we deem as “other,” even if our anger and disgust is running amuck inside of us. If we wish to induce a better society, one that improves the quality of life for everyone, then we must remain receptive and cognizant of opposing views. We can only advance our society through dialogue, and surely, the powerful and illustrious Mrs. Woolf was a master at this.

This is a loss that we cannot afford if we wish to be fully actualized human beings. This is why I couldn’t be more grateful for the life and work of Virginia Woolf: a true icon of feminism and an ambassador for the expansion of human consciousness.