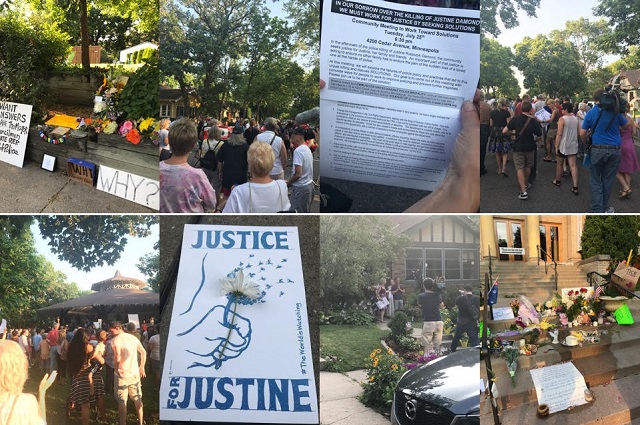 “Although the patriarchal ego prides itself on being reasonable, the twentieth century has been anything but the Age of Reason. In our collective neurosis, we have raped the earth, disrupted the delicate balance of nature, and created phallic missiles of mass destruction.” ~ Marion Woodman

On July 15th in Minneapolis, Minnesota, Justine Damond was shot and killed by police after calling 911 to report a possible sexual assault in the alley behind her house.

I did not know Justine personally, so a part of me feels that I have no right to write about her.

The spiritual community center where she taught is the same one that I teach at.

Like her, I would have reported a possible sexual assault, and maybe even, like she did, run out in my pajamas to give whatever information I had to the police.

Like her, I would have trusted the men in blue uniforms to set things right.

Our paths did cross, once, briefly. My impression of Justine, with her fun Australian accent, is memorable. And what she said that day hints at what we must do now, as a community, in the wake of her tragic death.

And so I write in honor of her, in honor of the love and light she stood for, and the kind-hearted person she was, which is so beautifully depicted in this video.

I met Justine in early December 2016, shortly after the election of Donald Trump. Many of us throughout my community were floundering, trying to figure out what to do next in this world that seemed to be upside down.

A small group of us met that morning at Lake Harriet Spiritual Community, and I was leading the service.

We sat in a circle, and I announced the theme: What’s going on? It was a question we all wanted answers to.

After all, we’d had a president—Barack Obama—who dared to display a range of authentic emotions without letting them control him. His speech was measured and calm, and yet every word carried immeasurable weight. Now, we are under the Twitter thumbs of a man who reacts before thinking, who is bullish, impulsive, angry, and vengeful.

We had, for our young men, a role model of humility, courage, and a ceaseless supply of faith in humanity. Now, these same growing men are told that strength is in the deception.

Trump’s supporters see in him a strong man. Or maybe a modern-day John Wayne. But he is neither of these things. Instead, like the media he denigrates, his strength is fake. It’s see-through. And what I see behind that fake strength is fear.

Another term for fake strength is “toxic masculinity.” There is a reason that Trump is so often parodied as a toddler—toxic masculinity manifests as a lack of discipline, discernment, and maturity.

But “toxic masculinity” is not a statement about gender. Energetically speaking, masculinity and femininity are definitions based on constitution and behavior, not sex. They are yang and yin, respectfully. They are energies available in the universe and in every living being. So while it might be more likely that a man would display traits of toxic masculinity, it is by no means exclusive to men. Toxic masculinity in a female, as an example, might be someone like Ann Coulter—bitter, insulting, and belligerent.

In a single person, toxic masculinity is a danger. In a group of people, it is a threat. When given power over others, it is a menace—which brings us back to that Sunday morning with Justine.

We went around the circle, sharing our emotional and even physical responses to the election. We also shared advice and tips for how each of us could hold the light and stay positive. When it was her turn, Justine told a story. Allow me to paraphrase:

Justine worked as a veterinarian. One day, a woman brought in her cat. The cat had an ugly, open wound on its side. No amount of ointment on the surface could heal the damage. Time could not heal the damage.

The wound was festering, and the cat was dying.

To save the cat, they had to cut open the wound. What they saw inside was even uglier—the wound was filled with puss. They held their noses. No one wanted to look at it, let alone dig into it.

But dig into and clean it out they did. Because they knew it was the only way the cat could survive.

As a veterinarian, and as a healer, Justine taught that in order to truly heal, we must find the courage to take on problems directly.

But we, the community, will continue to see this behavior play out again and again, closer and closer to home, unless and until we address the festering wound on our side. We are the cat. It is not just the responsibility of the police force to address the issue—it is up to all of us.

Thinking of how Justine died—at the hands of an officer who, by all early accounts, panicked at sounds nearby—it seems clear to me that whatever other reasons or excuses might come forth, toxic masculinity—a masculinity that is not mature or patient or wise or thoughtful—played a role in her senseless death that day.

But change is on its way.

We met at an intersection near Justine’s house. From the start, there was dialogue, comfort, questions, and anger vented in one of the chants: “No justice! No peace! Prosecute the police!”

We stopped in front of her home, where her fiancé came out to tearfully thank everyone. We continued to walk until we arrived at Beard’s Plaisance Park, where several speakers took turns at the microphone. These speakers included Nekima Levy-Pounds, a civil rights attorney, and Leslie Redmond, Vice President of the Minneapolis NAACP.

Leaders of Black Lives Matter also came and spoke. Valerie Castile, the mother of Philando Castile, who was killed by police during what should’ve been a routine traffic stop here in Minnesota, was there to express comfort and solidarity. We were all represented—black, white, Asian, Somali, men, women, children, faith leaders, activists, and members of the community.

Notably missing, however, was any hint of local police, which one Black Lives Matter speaker addressed this way: “We are used to holding these marches in our neighborhoods. We’re just not used to marching without being followed by police.”

Black Lives Matter supporters certainly could’ve taken the night off, claiming that this, the homicide of a white woman in an affluent neighborhood, was not their problem. Or, they could’ve said something along the lines of, “Now you know what we’re going through.” Instead, they walked past my group and said, “Thank you for being here.”

Words cannot express how humbling that moment was.

“I never thought I’d be standing up here, speaking up for a white woman, yet here I am. Because we are all human, and we are now allies in this fight,” said John Thompson, a leader of our local Black Lives Matter chapter. Rather than demonstrating fake strength, this man exuded courage, wisdom, and love, in action.

Levy-Pounds added, “We’re at the place where we can no longer ignore the truth. It is staring us in the face.” She is right. Ignoring the problem or hoping and praying it corrects itself will not work.

Another speaker said it this way: “White silence is white violence.” Regardless of our race, gender, or religion, we must all speak up and speak out, demand answers and solutions. We must demand nothing less than a complete investigation and even an overhaul of the entire system of policing—both procedural and psychological. We cannot, as Thompson said last night, allow cowardice to continue to patrol our streets.

The problem is not someone else’s to fix. The problem belongs to all of us. The victims were not black or white. They were human. And these incidents are not “one offs.” They are systemic.

Like the cat, the whole body of humanity is at risk as this toxicity spreads from community to community, doorstep to doorstep.

And even though the words of these speakers sometimes stung, they came from love and courage, not fear and hate. Rather than go our separate ways after the march to live our separate lives, we left the park as one voice, one body, one humanity. Unity and solidarity ultimately ruled the night.

I can’t say for sure, but I believe that Justine would have been proud of what transpired in her neighborhood, in her name.

Keri Mangis might seem a gentle yet candid introvert. But peel back a layer and you’ll uncover an inquisitive explorer of inner and outer realms. Peel back another layer and… Read full bio