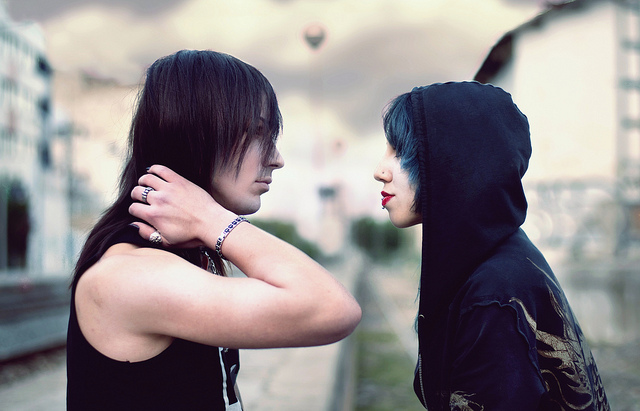 If you’ve ever taken a stroll down memory lane, as I know I have from time to time, you may notice all the relationship red flags of your past.

We may have overlooked them, explained them away, or even denied them. And, maybe we wish we could go back and save ourselves a little heartache by simply paying attention to all the signs. Or, maybe we’re trying to learn from them so that we don’t repeat the same mistakes. I’ve often noticed that the relationship red flags of a bad relationship—and even the green lights that signal a good one—are often subtle.

Here are just a few that I’ve noticed. May they be of benefit.

Relationship Red Flag: Your significant other criticizes people like you in the media.

Here’s a real-life example. I once dated someone who criticized women regularly in sitcoms, television dramas, and movies. If a woman was confident—she was egotistical. If a woman was sexy or successfully dated—she was a slut. If a woman received male attention—she was some kind of attention whore who enjoyed men fighting over her or paying her attention.

I didn’t realize at the time, with these comments made here and there, that what I was getting was this guy’s view of all women—including me. I should have run, instead of defending each and every female character, because the character I should have been seeing was his.

Relationship Red Flag: Your significant other does not compliment you or encourage you.

This is often a sign of his/her low self-esteem. It can also be a predictor of abuse.

#1—While it’s not anyone’s job to make us feel good about ourselves, in a healthy relationship, our partner would want us to know when we look great or do something well.

#2—Compliments and encouragement are positive motivators and a normal part of healthy relationships. When these aren’t present in a relationship, other things usually are: neglect, disrespect, disinterest, and selfishness.

#3—Any partner who doesn’t want us to feel good about ourselves is raising a big red flag. I once had a potential interest say, “I don’t do compliments.” Well, I didn’t do that relationship. Run now. Just go.

Relationship Green Light: Your significant other likes you just the way you are.

I thought we could all use a relationship green light right about now. When we’re with someone who likes who we are—not who we pretend to be or wish we were—we know this is a sign of a healthy relationship. We don’t have to be anything but who we are. We can relax in their company and enjoy a relationship that’s not about games or deception. This person celebrates your similarities and differences and doesn’t make you feel like you should change who you are to be in this relationship.

This one is huge!  Here are a few examples of how this might work:

This is one I’ve had the most experience with in my relationships. Mostly, partners avoided conflict like the plague, choosing to avoid me, deny there was a problem, or ghost me completely to keep from having an uncomfortable conversation. Others treated any conflict as insurmountable and the end of the relationship without an attempt to resolve it. Still other partners were happy to argue and then sweep everything under the rug until the next time.

Relationship Red Flag: There’s a “one who got away,” and it’s not you.

An unhealthy preoccupation with a past lover isn’t a good sign. Unfortunately, that can lead to the “greener pastures” rationalization that will keep that partner looking for something else—or hoping that the one they really want will come back. This isn’t a healthy relationship predictor, and it often raises a variety of other issues. Don’t we all want to be with someone who looks at us as the one they want to be with? Too much time staring into the rearview mirror means that the person we’re with isn’t focusing on us, the present relationship, or possibilities for our future.

I think sometimes relationships fail because friendship doesn’t become a real factor. How many of us skip all that and go straight to a love affair? How many of us have a love affair and yet don’t figure out how to really be friends while we’re in it? To be honest, to share who we really are, to be open to the other person’s quirks and flaws, to really connect with them on a level that is more intimate than just sex? When the relationship combines love and friendship something really special happens. The ability to be a true friend, and not solely a lover, can be a strong relationship green light.

I’m not a relationship guru. I’ve been divorced and my past is littered with dysfunctional relationships. But, what I hope I took away from that past is knowledge to help me in my future.

I hope to never again ignore my intuition and all the red flags I see simply because I don’t want to see them. And, I hope to recognize the green lights of a healthy relationship even if it’s not what I’ve grown accustomed to dealing with over the years.

By sharing this list, I hope that my experience can serve as a reminder that none of us are perfect and no relationship is perfect, but some relationships are worth the effort, while others seem to consist of our efforts alone.