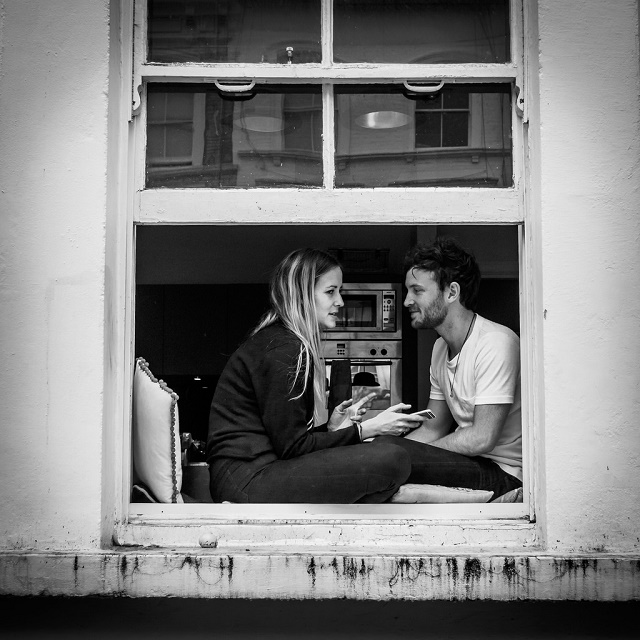 Author’s note: This is the second part to Them—a Love Story.

“Wake up,” he whispers, and he gently nudges her, moving some hair from her face.

As usual, she appears untouched, unaffected by the ravages of deep slumber—though she would surely tell you a different story. Her head moves a little and she groans. Not yet. She buries her face in the pillow. He watches as her legs move like a pair of scissors across their big mattress.

She lays flat on her stomach in a five-point star, her smooth, fleshy bottom slightly uncovered. He feels a swift, manly tingle below but pushes the urge away. He shakes those sexy thoughts from his head. Her exposure is not an open invitation. The dog pads softly to the end of their bed, his collar jingles, and he licks her toes. She recoils in a fit of giggles, giggles that do not sound at all like poetry or music, but more like a loud, gobbling turkey. He smiles as he leaves to brew the coffee.

She has a small scar below her right eye. She hides it well with a bit of makeup, but when he sees it he remembers the story she told him once. “It was put there by a boy.”

She used to race her bicycle in the neighborhood and, when she was eight, a boy with mean flared nostrils and dirty elbows cut her off on purpose. It sent her flying from her bike, and she smacked her face on a rock. The crash ripped her tender skin, creating a short, bloody gash that required a few stitches. Upon healing, but still hurting, she put her hands on her hips, looked that ugly boy square in the face, and challenged him to another race. Her daddy said, “This time watch for tricks.”

She said she could taste the win, and her eyes glowed and grew bigger with her words. He saw the story as she told it, and all it revealed was every last damn thing he ever wanted to know about her.

His beloved carries many scars, but this one is for all to see. It was put there by a wicked boy before she beat him.

Her bra never fits quite right, and her breasts come out of the top and spill out the sides. She calls it her “boulder holder,” and she laughs before sighing, resigned. She can’t seem to find one that works, despite years of effort and time devoted to the task.

This is the only enduring complaint she has about her body. But, as she struggles to contain herself, he quietly admires her. He feigns compassion for her plight, but really, he likes her overflow. Her softness, her curves, her juice. She is alive and ripe and bursting at the seams, and he likes it.

She is always reading. When she looks down at her book, her hair sometimes falls from behind her ears, making a sort of curtain that hides her face just a little. She doesn’t bother to swipe it back behind her ears right away because she’s concentrating—and it is magic. It is the sort of feminine magic that makes a man weak.

Her nails gently scrape his back, giving him blissful goosebumps. “There is something here that you need to get checked,”  she says, her brows furrow and scrutinize his skin, honing in on a smallish, brown mole. She kisses him lightly between his shoulder blades as she runs her hands down his arms. He feels her forehead brush against his skin and tilts his neck back. She kisses him again and again. Every last freckle gets a loud, wet kiss from her crimson, cranberry lips, and she laughs like it’s Thanksgiving.

She yells at the television. She shakes her head from side to side at the careless words flowing like a septic tank, draining from the mouths of those unyielding spin doctors. She marches across the floor and brushes her teeth with angry, sharp darts shooting from her ears. She spits into the sink violently, waving her pink toothbrush around like a mad maestro. She cusses and storms. He’s a little bit afraid of her rage, he’s not going to lie.

When she’s tired, she puts down her pen. She closes her laptop and curls herself around their “good boy” and falls asleep on the couch. Her mouth drops open and sometimes she murmurs in fits and starts as she wrestles with a nap. Weird things emerge. Things like, “Why you so sexy?” in a breathy urban vernacular. He leans in to hear more. “Who is this woman?” he thinks. She turns on her side and the dog adjusts accordingly.

At the ballgame they share peanuts. She puts all the shells back into the bag so she can sprinkle them into her composting operation at home. She’s committed. She yells, “Safe!” and stands right up, her full height stretching to the sky like a tree as she waves her arms in outrage.

Her player stoically shuffles back to the dugout, shaking his head. From the stands she shouts, “You were safe!” and remarkably, her player seems to hear her voice as he pumps his fist in her direction, maintaining the cadence of his athletic trot. “He was safe,” she says again, this time softly, sitting back down, grabbing another peanut from the bag. He does not share her adamant conviction. He lets it go without countering, because who cares?

Her hand is so much smaller than his, but it fits just right when he’s holding it. In the car, on a walk, at the store, he likes knowing that he can reach for her hand, and it will be there, seeking his. He knows that simply holding her hand connects them in a way that words and history do not, and it is a treat. It is a satisfying, necessary treat similar to that of a three-scoop ice-cream cone, covered in rainbow sprinkles, on a sweltering, mid-summer day.

Speaking of treats, her waffles do not disappoint. She adds cornmeal to her batter which makes all the edges crispy, but the waffle itself somehow remains divinely fluffy and light. He has tried in vain to make the waffles this way, her way, but they never come out the same. Because they are not hers.

He brings her coffee in that ugly mug she bought him, the one she likes. The ratio of coffee to sugar to milk is steaming, aromatic perfection. It is happiness in a cup. She smiles up at him as he puts it down on her wobbly, little table.

In that cup swirls mutual fascination combined with profound and lasting respect, culled from the lessons of living independently, but also from their other distant, long-forgotten lovers who haphazardly fell, tumbling off both of their timelines, into the trenches of yesterday like cardboard boxes off a truck. It helps her believe again in the unselfishness of love.

Yes, this is what she believes when he simply brings her coffee, expertly prepared, and it’s best not to question her position. Because, once upon a time, at the very beginning, he listened when she told him exactly how she likes it.

He listened then, as he listens now. When she tells him all of her stories. When she rages and when she sleeps. He listens to her laughter. He revels in it. He lets her laughter drench his parched and pardoned soul.

“You sound like a turkey,” he says, grinning. She playfully swats him on the chest.

And with his blessed gift, with just his quiet listening, he tells her over and over again, everything she needs to know about him.