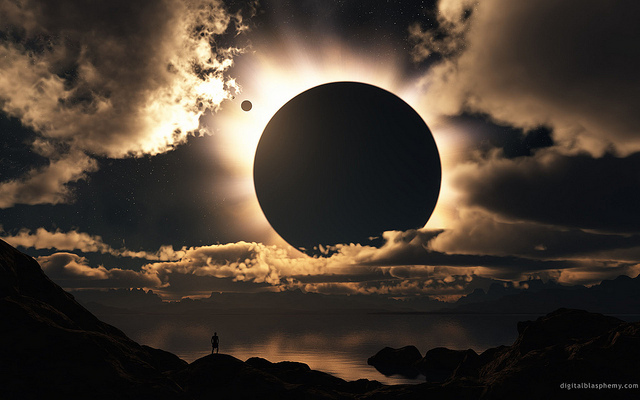 On August 21st 2017, there is going to be a powerful solar eclipse, which will be the first to sweep across the whole of America since 1918.

A total solar eclipse is a natural phenomenon that occurs when the central disk of the sun is entirely covered by the moon and the moon’s shadow falls on Earth. This causes Earth to fall into a stage of temporary darkness.

When the sun disappears behind the moon, daylight will turn to twilight, temperatures will plunge, and rays of sunlight will streak across the sky from the silhouette of the moon.

Click here to see a stunning example of what to expect.

For those who wish to see the eclipse, it is important to be prepared, as it will only last for a few minutes. The moon initially appears to touch the sun’s disk about one hour and a half before the entire eclipse.

The show begins to get really exciting about 70 minutes after the sun and moon initially appear to make contact. From there, the moon will cover the sun more and more until the sun is no longer in view, other than what looks like a sparkling diamond ring around the outer edge of the moon.

Once the total eclipse has occurred, the magnificent sight is not quite over, as it is just as enthralling watching the action in reverse as the moon begins to unveil the sun. It will look as though the moon moves across the sun until we’re, once again, in total daylight.

Although it is not possible to be looking in two directions at one time, for those who quickly look to the West in the brief moments just before the total eclipse takes place, they will witness what looks like a huge shadow sweeping across the Earth.

It has been described as a vast, dark, transparent cloud that flies overhead, and is particularly noticeable and enchanting if the viewer is standing on higher ground land looking down.

The eclipse is also witnessed differently depending on the exact location it is being looked up at from Earth, and many areas will only see a partial eclipse. However millions of people across America, weather-dependent, will be fortunate enough to witness an extremely rare total eclipse, which will occur for the first time since 1979.

In the United States, the total eclipse will start in Salem, Oregon between 8:46 a.m. before crossing 14 states to reach the edge of the Atlantic Ocean off the coast of South Carolina.

The 14 states that will experience the eclipse in its totality include: Oregon, Idaho, Wyoming, Nebraska, Kansas, Missouri, Illinois, Kentucky, Tennessee, Georgia, North Carolina, and South Carolina and every state in the US will be able to witness a partial eclipse, if the sky is not too cloudy.

Click here to watch video animations of how the eclipse will appear in each of the 14 states.

Across this path many campsites and monument sites have been pre-booked months in advance so that spectators can gather to gaze up in awe at possibly one of the universe’s most magnificent and unforgettable sights.

If you aren’t able to get outdoors to witness the solar eclipse, or you are not in a viewing area and would like to watch the total solar eclipse, NASA has released an app with the option of watching it on live video stream.

It is not recommended to look directly at the sun at certain times of the day as it can cause severe and permanent eye damage, however, many reputable sites, including NASA, explain that it is perfectly fine to view a total solar eclipse with the naked eye.

If the eclipse is partial it is highly recommended to wear specially created viewing glasses that are compliant with safety standards and have solar filters. It is also unsafe to look at the sun through binoculars, telescopes, cameras, or any other optical advice, whether wearing the glasses or not.

For those who are fortunate enough to be seeing the total eclipse, it is advisable to remove the eclipse glasses when it reaches totality to be able to witness the stunning ring around the moon. Remember, it is important to put the glasses back on the moment totality ends, and the sun starts to become visible.

Solar filters can be attached to devices—but it is worth getting professional advice before doing so.

To find out the exact time of the eclipse from start to finish, and also how much of the sun will be visible from any location in the world click here.

Download three free posters that are ideal for printing out and taking with you when heading out to watch the eclipse. The posters include a general poster, a map of the path of totality, as well as a “safe viewing” guide.

What to take with you:

A blanket or chairs—whichever is preferred

A picnic—including plenty of water

Have a quick check of the traffic reports and weather forecast before heading out, to ensure you don’t get caught in traffic jams, and that you take along the right clothing. And, importantly, enjoy the celestial event!

Very important: do not take pets. It is essential to keep them indoors during the eclipse as if they look up at it, it can seriously damage their eyes.

If anyone misses it, or can’t wait for the next one, it isn’t too far away. The next North American total eclipse will take place in 2024.