Video: Act of Terror in Charlottesville (to call it anything else is racism). 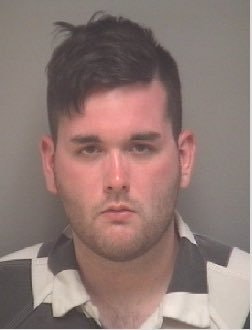 “Behold the terrorist who killed one and wounded nineteen more in a cowardly attack with his car.” (i.imgur.com)

Let’s call it what it is: terrorism. Even Ted Cruz just admitted as much:

“The Nazis, the KKK, and white supremacists are repulsive and evil, and all of us have a moral obligation to speak out against the lies, bigotry, anti-Semitism, and hatred that they propagate. Having watched the horrifying video of the car deliberately crashing into a crowd of protesters, I urge the Department of Justice to immediately investigate and prosecute this grotesque act domestic terrorism.” ~
This just in: “Wait which picture are your friends mad at?

Conservatives on my feed: Hey, they may be Nazis but they have a right to say what they want whether you like it or not.

Also Conservatives on my feed: that Colin Kapernick best shut his mouth and respect the flag. This is America if you don’t like it you can leave.”

“I applaud your unrelenting hypocrisy.” 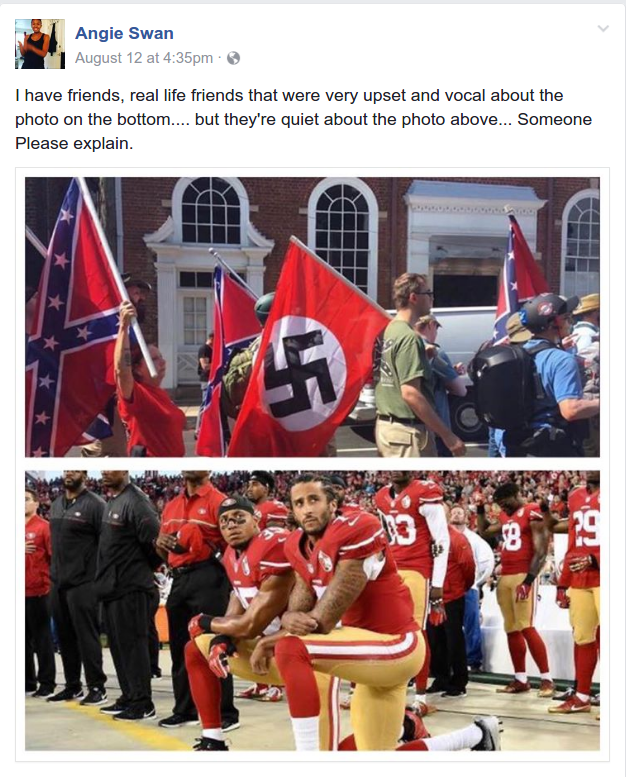 “Trump supporters chant “Heil Trump” and do nazi salutes at Unite the Right rally in Charlottesville.”

For a moving and worthwhile personal take of today by an Elephant writer, here.
~

I guess I got confused when they gave the #Hitler salute and chanted “blood and soil” b/c it reminded me of who I fought in my youth. https://t.co/Z8NNfcbGAj

I signed up to fight Nazis 73 years ago and I’ll do it again if I have to.

Hatred, bigotry, & fascism should have no place in this country.

Our country is about coming together, not hatred. Our history is wildly imperfect, but our values are liberty, opportunity, equality. Not this. Let us all come together, united, against such petty hate and violence. ~ Waylon Lewis, ed.

“We will have to repent in this generation not merely for the hateful words and actions of the bad people but for the appalling silence of the good people.”
~ MLK Jr.

Video of car hitting anti-racist protestors. Let there be no confusion: this was deliberate terrorism. My prayers with victims. Stay home. pic.twitter.com/MUOZs71Pf4

In case, like me, you had a normal Friday and Saturday and somehow missed all of this:

“Every miserable fool who has nothing at all of which he can be proud, adopts as a last resource pride in the nation to which he belongs; he is ready and happy to defend all its faults and follies tooth and nail, thus reimbursing himself for his own inferiority.”

This image says it all:

“Fake patriots.” It’s a parody of a famous Norman Rockwell painting, itself a satire. This is the only appropriate context in which to display a symbol of hate:

“Real Americans displaying the Nazi flag — after capturing it from Nazis they killed, 1944” Clear moment of impact below

Photo of impact below

Below: Happens at roughly 8:25

Also: “To those demanding photographic evidence of Nazi regalia in #charlottesville, here’s what’s on display before breakfast. Be safe today.”

“I mean this is great and all but there’s an actual picture of the protestors holding their tiki torches and doing a Nazi salute last night.” ~ Redditor 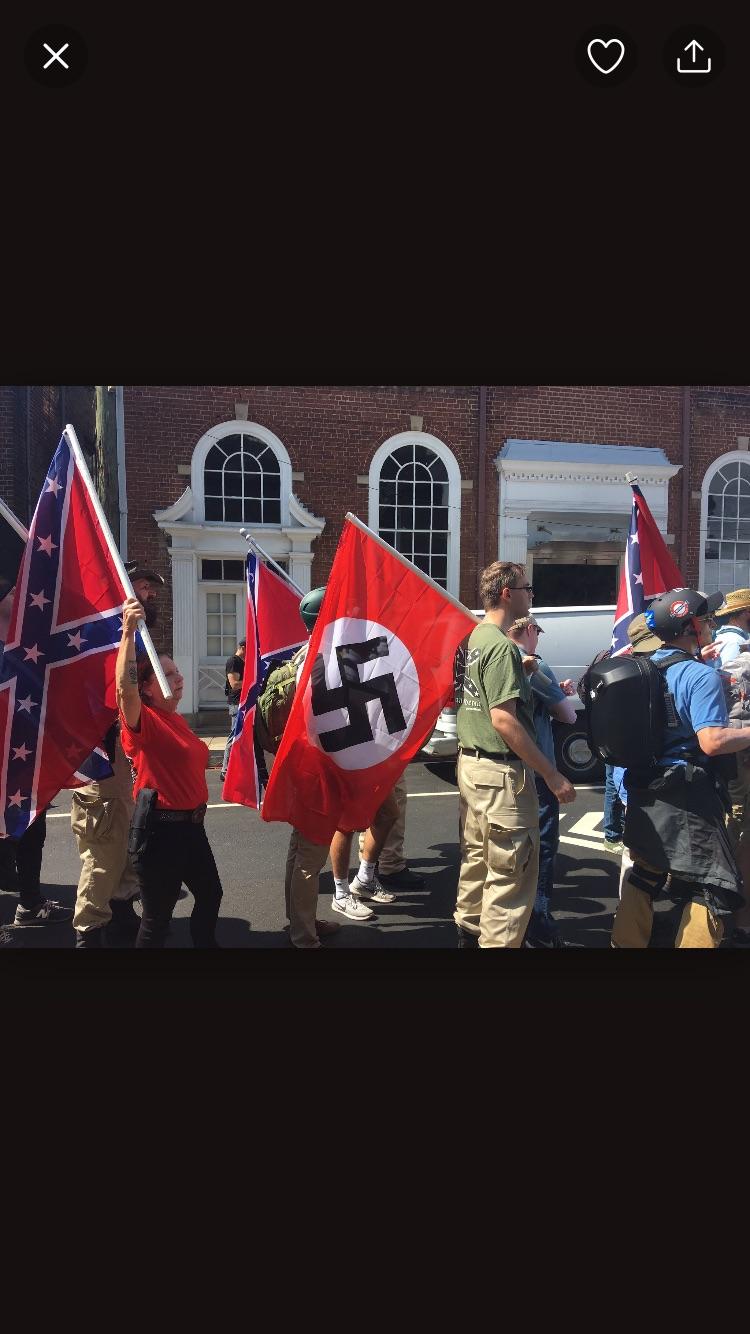 It’s time to call out racists and Muslim-haters and cowardly warmongers anywhere we see ’em:

“My sentiments and experience exactly. The author did us proud. Semper Fidelis.”

A Trump fan calls Obama a pu**y. US Marine completely owns him. (i.redd.it) 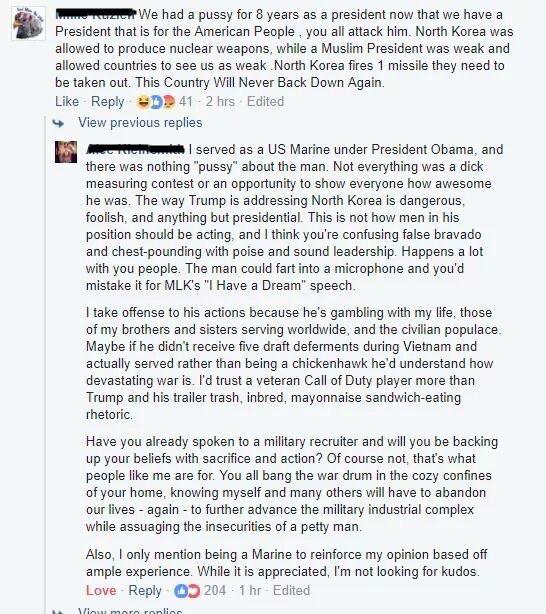 Reddit’s way of taking responsibility for their own community’s hatred: The ACTUAL FUCKING NAZIS AND WHITE NATIONALISTS /r/the_donald supported have now killed someone in an ACTUAL FUCKING TERRORIST ATTACK in Virginia. Now they have the nerve to blame Democrats and act like they are the real victims. (mobile.twitter.com)

This is above, too, but laid our here more clearly. This veteran’s response should be printed on a plaque beneath a new statue: 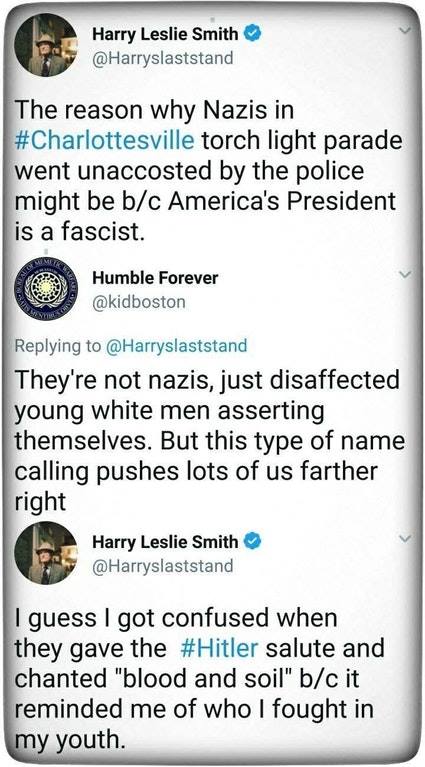