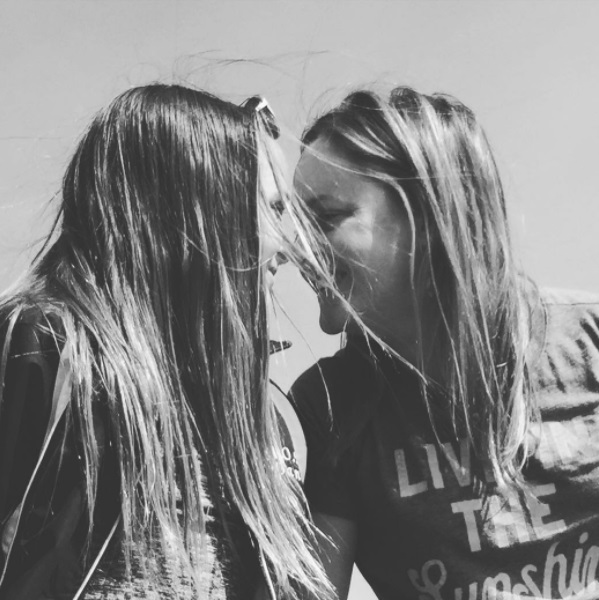 Sometimes, I royally suck at being a mom.

Yesterday, my daughter did something I have been telling her for years to stop doing. I yelled at her and said she was being “f*cking disrespectful.” The words left my mouth quicker than I could catch them.

I felt so ashamed.

When she was tiny, I had more patience. I gave her more leeway to make mistakes. Those were the days that I felt the glow of her admiration—she hung on my actions and blossomed under my praise.

As she has grown, my expectations have also grown. I haven’t forgotten she is still a kid, and I often think she is capable of more. Weeks pass and it feels like we are completely going against the grain with one another.

The old days of her staring at me wide-eyed and relaying every detail of her day have been replaced with phrases like: “fine,” or “I’m tired,” and “just a minute.”

My heart was heavy after my swearing outburst. It was like I was stumbling around in the dark all afternoon, caught between this place of feeling bad and not understanding fully who I am at times. But I had to push through.

It was almost 10 p.m. when I went to pick my daughter up from dance class. As I stood outside the studio waiting, another mom came up to me. She had dark circles around her eyes.

She shared how she had been up since 5 a.m. and running all over town since she got home from work. She told me how she had been disrespected by her daughter and how much it had bothered her.

There was something about the way she spoke that made the burden of what I had been carrying suddenly drop off my shoulders. I got out of my own head and looked around at the other dozen women in the room. We were mostly the same—underappreciated, overlooked, and lacking in the superstar status we once owned.

Then, it hit me: welcome to the teenage years.

That five-minute conversation opened my eyes and offered me the following sustenance, which I hope can be of benefit to other parents:

>> Be gentle and kind to yourself. We are doing the best we can—and even our worst is probably still pretty damn good.

My daughter and I had a candid conversation a few weeks back. I was talking about a situation that had come up for me, and she let it slip that she thought I was really angry sometimes.

I took those words in—“really angry.” I had no defense, because she was right.

Mostly, I love being a mom, but sometimes I feel angry that I’m cleaning up after everyone, doing laundry, making meals, paying all the bills, and being the responsible one. I may as well have a taxi license, a psychotherapist’s degree, a police badge, Care Bear credentials, and the key to a bank vault.

There are a lot of roles to fill and it’s okay to be angry sometimes. I might slip up and swear, but that’s life. I own my mistakes.

>> Check in with other parents. Reach out. Find the ones who are willing to be honest and direct.

It’s a tough game. With social media and “Fakebook,” it seems like everyone is living under a rainbow. They aren’t. Trust that raising a teenager is one of the biggest challenges we face as parents.

Teenagers are mostly thankless and bottomless pits of wanting. There are so many things to contest with: hormones, peers, fads, and the fact that they think they know more than they actually do. It’s okay; it won’t last forever.

So when it gets tough, have dinner with parents who get it. Go to yoga. Cry and commiserate. Journal and take a walk. Send a text. Connect in any way possible.

>> Affirm it’s worth it. Work hard, and eventually reap the rewards.

My new mantra is one I stole from The Tortoise and the Hare—“slow and steady wins the race.” We have to accept that we may hear, “I’m sorry” and “I forgot” every day for the next five years. It’s part of the package.

There will be socks jammed in between the couch cushions, makeup smeared on my white carpet, inside out jeans in the laundry, and repetitive warnings of what not brushing your teeth and showering leads to.

I know that it will be a while before I garner the gifts of my labour.

I will lose my temper. I will learn patience. I will feel lost. Then I will rinse and repeat.

Slow and steady wins the race.

“Embrace your beautiful mess of a life with your child. No matter how hard it gets, do not disengage…do something—anything—to connect with and guide your child today. Parenting is an adventure of the greatest significance. It is your legacy.” ~ Andy Kerckhoff