Any Manly Vegan would Weep over this Dish: Black Quinoa with Miso Zaalouk. {Recipe} 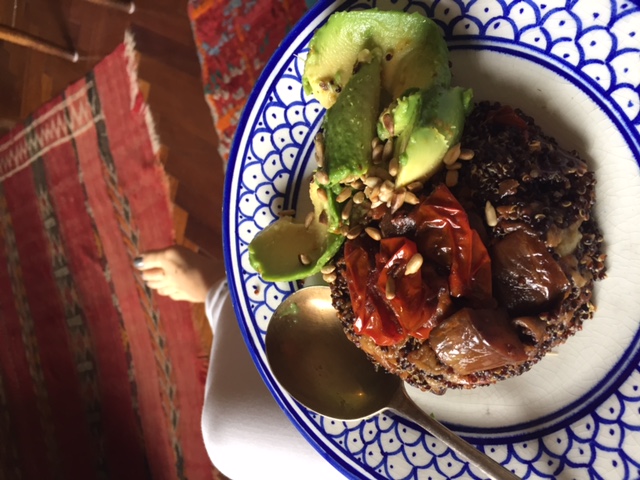 I know many people think grain is not their friend, but it’s definitely mine.

I love the variety and once even made it 60 percent of my diet. I was macrobiotic and ate a delicately balanced meal of grains, beans, sea veg, vegetables, and pickles for over 10 years. {I considered sitting down with a bowl of rice and chewing it to be my “true north.”

Food can be incredibly centering and grounding. But many of us have a tendency to go for “comfort,” making excuses for eating certain foods that are not the healthiest. Sometimes, it does takes awhile to know what I need, but give me a bowl of rice and miso soup and all’s right with the world. It could also be a soup made with barley, dhal, or a bowl of spicy lemon rice. Often, it is quinoa.

Quinoa has made it on the international scene for a few years now, but I started eating it around 1985 in Boulder, Colorado, where it was introduced by friends, Stephen Gorad and Don McKinnley, who had brought it up from South America.

They commenced to grow it in the San Luis Valley in southern Colorado with great success. Soon after, my friend Rebecca Wood wrote “the book of quinoa.” As you may know, quinoa is not a grain per se; it’s a seed that grows from a plant of the goosefoot family, such as spinach and chard.

That’s why it’s gluten free. It has a ream of health benefits and is known to be a superfood, an antioxidant, and anti-inflammatory. It’s also a whole protein, meaning that it has all the amino acids we need to satisfy and nourish a vegetarian or vegan. Hence the boom of quinoa almost the world over.

As a world traveler, my tastes have expanded along with my education on how to use spices and what separates dishes from one country to another. Now that I’ve been exposed, I also use my own creative approach when I’m at the stove. I can honestly say that’s where it happens. I don’t often have an idea in mind. I just start cooking and spices want to jump in.

My cooking has been greatly influenced by travel in India and Morocco over the years. I walk through the markets there, and in Italy, my senses alert, informing me, as if they are taking me for a walk. I float on the lively voices and hustle-bustle of vendors shouting their deals and old ladies lined up to push them even further. You can see there are plans for those never-ending zucchinis and tomatoes by the bushel. It’s about what’s in season and seizing the moment of “balsamic” ripeness.

(Balsamic has nothing to do with vinegar or even balsam wood. It means the moment when something is at peak ripeness: the sap has risen to the top, the herbs flower, the figs split, peaches smell…Well, everything smells when at it’s peak; cheese for instance, even old socks.)

My instinct is to pull up a melon to smell its sweetness, or if I see something extraordinary like a violet striped eggplant that looks firm and fresh, I take it home. Which is what I did recently when in Sant’Ambrogio, my favorite outdoor market in one of my favorite neighborhoods of Florence, Italy, where I live half the year.

Black quinoa is thankfully available here at a small corner stall of the indoor market. I love it because it’s delicious and nutty and slightly bitter. I like it’s spiral nature, too. It has ancient history and I sense the body recognizes it as real food—as opposed to the processed food nowadays that causes us so many problems with digestion.

Any naturally black food, such as black rice and black beans, soybeans in particular, is said to be medicinal to the sex organs. Miso adds a nice, deep yang salt balance to the eggplant’s yin . And I love zaalouk! It’s one of my favorite dishes on the coast of Morocco where I stay in a little whitewashed inn on the beach and ride camels before breakfast.

Keep yourself healthy with this simple recipe, which is pretty tasty right now, with tomatoes and eggplants currently in season. It’s a bit crunchy, spicy, and exotic. Take a trip around the world and sense a connection to the Andean Altiplano, Japan, Morocco, and even Colorado.

Waylon would weep over this dish—as long as someone made it for him.

Chop eggplant into chunks and tomatoes into quarters (cherry tomatoes into halves). Sauté eggplant and tomatoes for a few minutes in olive oil in a heavy-bottomed pot with a lid. Add a pinch of cumin, salt, and chili powder, until they start giving up their liquid.

Dilute miso in a little warm water and add to the pot. Simmer with the lid on, stirring often to prevent sticking. Let it soften and become indistinguishable, more like a spread consistency. Taste for salt.

Put the quinoa in a ring mold or shallow bowl. Turn it upside down on a plate. Add a scoop of the Zaalouk on top. Put some avocado on the side if you fancy.

It looks good like this, but you could also add microgreens.

Option: I had just roasted some sunflower seeds that I threw on, but I wasn’t planning to. 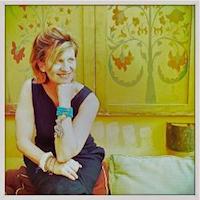