Problematic Racist, Sexist Movies: How not to be a Passive Consumer. 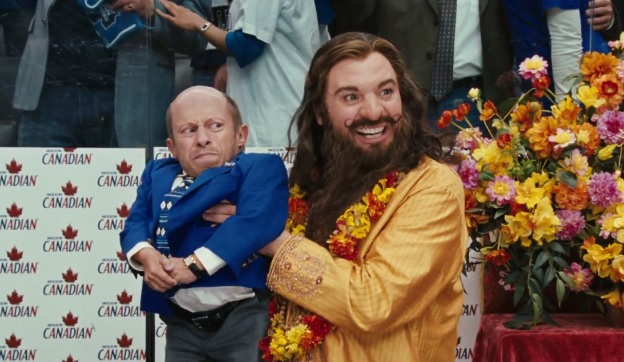 Let’s talk about something that I know everyone enjoys: the media and politics.

It’s become more common lately for people to point out if something in a narrative is racist, sexist, homophobic, ableist, or whatever. And then, of course, there’s a counter-reaction. For example, you might see an exchange similar to this one somewhere on the internet:

Person One: I found this recently released movie to be very sexist/racist/homophobic.

Person Two: Oh my God, how dare you. I can’t like anything anymore!

Now, the reason that I bring this up is not because I want to make fun of either side of the argument. Rather, I’m sort of interested in this idea that a piece of media is inherently unlikeable because it includes questionable politics.

I mean, if this was true, then what media could we consume? Is there any media that doesn’t offend somebody?

Would we have no other choice than to reject media altogether—stop buying books, stop going out to movies, all to avoid media that is racist, sexist, homophobic, or whatever the case may be?

Because, after all, all narratives are written by human beings, and they are not written in a vacuum. We exist in a society where ideas that are racist, sexist, homophobic, transphobic, and ableist are sometimes considered the norm. Sometimes, writers internalize these ideas. Sometimes, by the time a writer sits down to write a particular story, they haven’t yet thought critically about every last social justice movement that exists out there.

And, not only that, but there are many common, historical tropes in writing that rely upon certain sexist ideals—like the trope of the persecuted heroine, or the hero (who is usually characterized not only as male, but as hyper-masculine as well).

So what does this mean? Can we not enjoy any story because of this?

Well, while different people might have different opinions on this, I’m personally a huge fan of stories. And I don’t think that someone pointing out that a narrative isn’t inclusive enough means that you can’t enjoy it.

I am aware that it isn’t inclusive toward…anybody.

“300” is a such a sexist movie that it doesn’t pass the Bechdel test (which, for those of you who aren’t aware, is the absolute lowest standard to show that a movie includes women as active agents in the text). It’s also a racist movie, portraying all of the villains as dark skinned and all of the heroes are light skinned, which plays on America’s post-9/11 Islamophobia.

And, the cherry on top of this sundae is that the movie is very homophobic. “Boy-lover” is used repeatedly throughout the film as an insult toward men (something that is not at all historically accurate for the Spartans, I might add). The villains are all designed to look rather feminine, while the heroes are designed to look masculine. And, perhaps worst of all, director Zack Snyder also admitted to playing with homophobia as a tool to make the lead villain seem more foreign and intimidating to the presumed audience, claiming that he intentionally coded the villain as gay because, “What’s more scary to a 20-year-old boy than a giant god-king who wants to have his way with you?”

So, yeah, this movie is a political nightmare, but I still kind of like it.

Why? Because I also think it’s a sort of definitive action movie. It won’t make you think (and if you do, you won’t like what you think), but it does have some good fight scenes, some super macho tough dudes, and visually speaking, the movie is stunning. There’s enough in the movie that, as much as I’m aware of its political faults—and I’m not going to forget them—I still manage to leave the movie feeling like I got what I wanted out of it.

And, at the end of the day, I think that’s what we should mostly be striving for when we say that a narrative is racist, sexist, or homophobic: awareness.

You can still like “Snow White and the Seven Dwarfs” even if you know it’s sexist. You can look fondly on “Breakfast at Tiffany’s,” even knowing that it’s kind of racist.

But, it’s important that you are aware that it is, because if you aren’t, then the entire context of the narrative changes.

Instead of accepting that a book or movie is wrong, that it’s just for the purposes of a narrative and the narrative is entirely fantasy, you run the risk of taking that into the real world, of believing that this is actually how people are.

If I didn’t know that “300” was sexist, then I might just assume that women were all passive agents who didn’t really contribute all that much to anything…unless they happened to be Lena Headey, who portrayed the queen. If I didn’t know that “300” was homophobic, I might assume that all gay men were threats to straight men. These are the lessons that the narrative is teaching me, so if I’m not questioning them, then I run the risk of accepting them instead.

And more than that, we seem to be at a turning point for a lot of media.

The most recent movie to win the Academy Award for Best Picture was about a gay black man: “Moonlight.” One of 2017’s highest grossing movies was about a female superhero: “Wonder Woman.” But it wasn’t very long ago that movie studios were refusing to put female superheroes in their own solo movies because they tended to flop when compared to their male counterparts.

People are more interested in seeing diversity in our media, and this is awesome. This gives more people the opportunity to see themselves represented, rather than just the same straight, middle-to-upper-class, young-to-middle-age white dudes who keep getting catered to over and over again.

And as people begin to crave diversity in media, it becomes more important for us to talk about what kind of diversity. We might see a movie about women and say, “That’s great, but the writing was kind of sexist. Can you give us more of this instead?” And if there are enough people demanding, the media will eventually supply.

We point out that there wasn’t enough racial diversity in a movie because we want to see more diversity going forward; not necessarily because we think the original movie shouldn’t be watched and enjoyed. You can like the original narrative all you want; just be aware that there is room for improvement. And hopefully, if enough people keep talking about it, it will be improved.

But what if you aren’t entirely sure if the narrative in question is problematic?

These things aren’t always clear; sometimes, the same story can be interpreted in two different ways. One of my favourite movies of all time, “Moulin Rouge,” can be interpreted as either slut shaming or sex positive, depending on how you look at the story, and really, neither way is entirely wrong. We all interpret stories differently. We all bring our own personal experiences and outlooks into a story, and that alters the way we see it.

So, really, when it comes to this question, the only thing you can do is to think critically. Could this message potentially harm someone emotionally? Is this a message that I want to be taking away from this story and applying to my own life?

This isn’t just something that we should be doing with problematic texts, but with every text. Stories do not develop in a vacuum; they reflect something about our society, and so thinking critically about stories forces us to think critically about ourselves and those around us. It makes us more aware as citizens, and more thoughtful about the issues that we face.

A problematic story is not meaningless. It is not something to be shunned and ignored; it is a ground for us to begin thinking from, a place for us to learn and grow.

So the next time you watch a movie or read a book, and you come across something potentially problematic, think it through. Discuss it with someone else if you can and feel comfortable doing so. It is alright to enjoy the media, so long as you are not passive in your consumption of it.